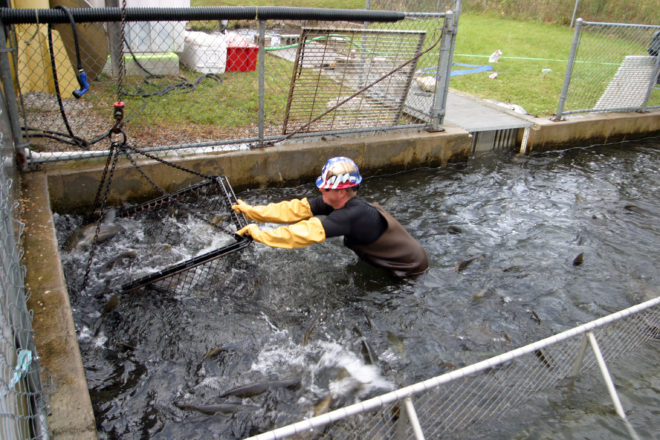 Sending a net full of Chinook up from the holding tank.

When Chinook salmon make their last run in the fall from Lake Michigan up little Strawberry Creek in Sturgeon Bay to spawn and die, they are doing much more than completing their life cycle.

The annual migration to Strawberry Creek means another generation of Chinook will be raised and stocked the following year. The fish are weighed and measured, sexed and checked for a clipped adipose fin, which means the fish has been tagged as a fingerling with a tiny stainless steel wire with a binary code etched into it.

Eggs are then collected from the female fish and are mixed with milt (sperm) from male fish. Water is then added, causing fertilization. The eggs are then rinsed and are ready for transport to fish hatcheries. 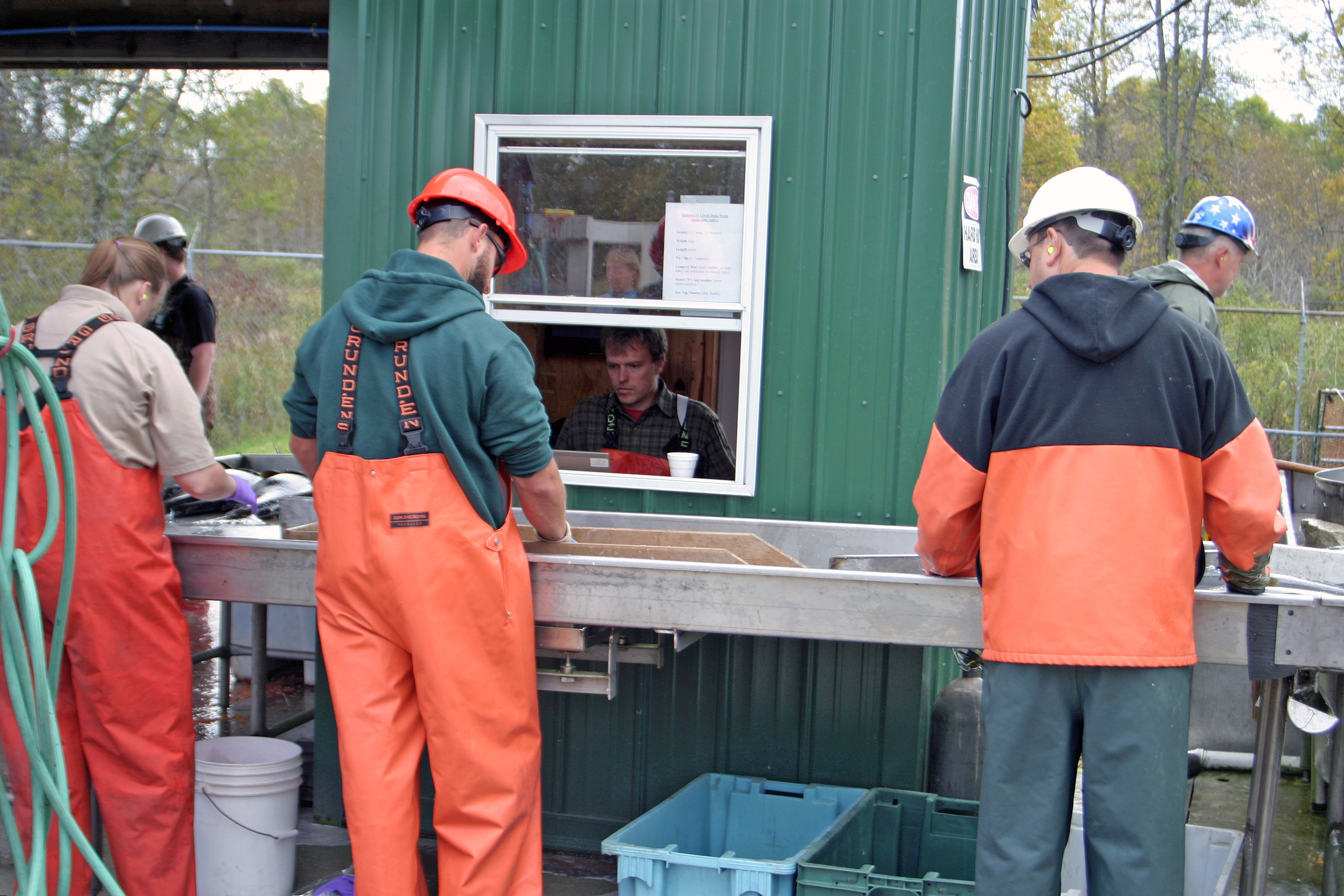 Strawberry Creek was the first stocking and egg collection site in the state, and it remains the primary source for Lake Michigan’s Chinook stocking program. According to a report from the Wisconsin Sea Grant, the Chinook salmon fishing industry generated $32 million in 2016.

The Wisconsin Department of Natural Resources began the Chinook salmon program at Strawberry Creek in 1969 when 65,000 fingerlings were stocked in the creek. Since then, an average of 200,000 fingerlings have been released at the site each year. Chinook eggs have been collected there since 1972.

The DNR’s quota is about 800,000 fish, but they gather way more eggs than that. Darren Lewis of Fort Atkinson, Wis., has been participating in the annual fall salmon run at Strawberry Creek for 20 years, collecting excess eggs for Atlas Mike’s Bait Shop in Fort Atkinson.

The headless, gutted fish are then separated into two categories. Fish larger than 36 inches are placed in tubs that will go to the Dramm Corp. in Manitowoc, makers of an organic fertilizer. Smaller fish go to area food pantries.

“We use them to feed people in need. It’s a wonderful program,” said Craig Robbins, director of Paul’s Pantry in Green Bay. “We feed about 180 households per day, five days a week. The need is always great. Purchasing meat is expensive, so donations like this certainly are a huge help for us, especially something as heart healthy and good as salmon. It’s a wonderful way to help those in need with great nutrition.”

Robbins said when a tub of salmon is delivered, Paul’s Pantry employees bag up the fish.

“We have the capacity to distribute that amount of fish very quickly,” he said. “Whoever wants one, they have to clean it themselves. Some are very, very excited and some are, ‘Wow, not sure what to do with this.’ A lot of people don’t know how to clean a fish. But it works out.”

On Oct. 5, a total of 632 Chinook were processed at Strawberry Creek, and of that 108 female Chinooks were spawned, and about 543,971 eggs were collected. Several hundred Chinooks were also not processed on Thursday, and these fish were kept for the next egg collection day. Spawning dates at Strawberry Creek were also held Oct. 9 and 12, and are tentatively set for Oct. 16 and 19.