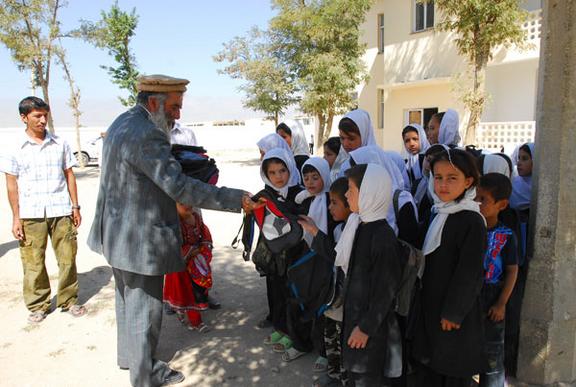 Outside the school. Photo contributed.

It’s been more than seven years since the United States launched Operation Enduring Freedom and invaded Afghanistan in response to the terrorist attacks of Sept. 11, 2001. Seven years in which the men and women of our armed forces have been asked to give so much, while so little has been asked of the average American. 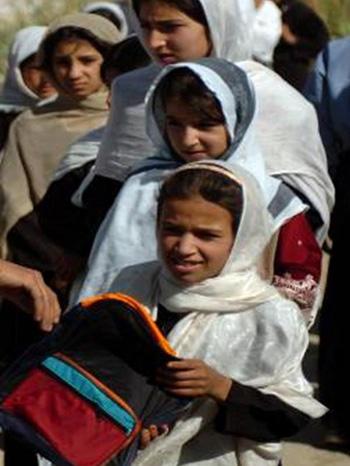 Thousands of Afghan school children stand to benefit from the efforts of U.S. soldiers. Photo contributed.

But a Special Forces soldier with Door County roots serving in Afghanistan is offering folks back home an opportunity to make a meaningful contribution to the fight through Operation Back Pack, a program that aims to provide 5,000 impoverished Afghan children with the supplies needed to get a better education.

Captain Patrick Flood is the Headquarters Company Commander in charge of staff and support personnel for a Special Forces group serving in Afghanistan (for security purposes, he could not specify his location, unit, and base, but did say that he operates near an airbase).

Now serving his fourth tour of duty in Afghanistan (he was wounded and received a Bronze Star for Valor in his last rotation), Capt. Flood is one of 33,000 American troops still working to establish security in a country ravaged by four decades of armed conflict. 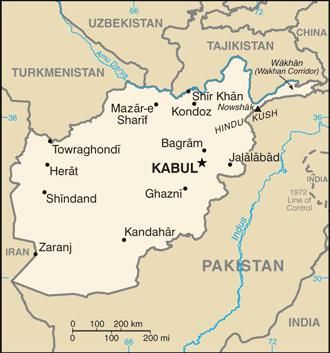 Afghanistan is larger in land mass and population than Iraq.

Those children will start their new school year Jan. 1, and Capt. Flood’s Special Forces group hopes to give all 5,000 of them a backpack full of new clothes and school supplies to improve their quality of life and demonstrate American Goodwill toward the children of Afghanistan. He is seeking donations from the Door County community (see sidebar) to support this effort.

“It is not the size of the gesture that will matter in this case, but the gesture itself,” he said. “It symbolizes the fact that you have also not lost hope. I would like to ask you to remain optimistic about the outcome of our efforts here. Things are not as bleak as sometimes portrayed. The meaning of our sacrifice will endure.”

The task facing troops in Afghanistan is perhaps even more complicated and difficult than that faced in Iraq (where Capt. Flood has also served), as Afghanistan is larger, more populous, and more rugged than Iraq, where the U.S. has four times as many troops.

Outside the school. Photo contributed.

While the security situation in Iraq has stabilized in the last year, Afghanistan has become the deadlier of the two conflicts, though it receives little attention in the press and from the public, becoming known as “The Forgotten War.”

The son of Mike and Ann Flood of Ephraim, Patrick Flood was an altar boy at St. Rosalia’s Catholic Church and a member of the Boy Scouts in his youth, and enjoyed an upbringing far different than the children he now helps protect. He played basketball at Gibraltar High School before moving on to George Washington University in Washington D.C. Now half a world away from the quiet back roads that bisect the fields and estates of northern Door County, much of his focus is on helping Afghan children whose lives are a far cry from the safe, secure environment in which he grew up.

Captain Flood is responsible for the base defense of the Combined Joint Special Operations Task Force – Afghanistan, and as part of that responsibility he travels to local villages in order to get to know the neighbors. The philosophy is simple, he said via email: “Good neighbors always take care of each other. They basically provide us with early warning and we assess their living conditions and attempt to improve them where possible.”

Operation Back Pack is just one part of a broader shift in military strategy in the country that once harbored Osama bin Laden under Taliban rule (bin Laden is now believed to be hiding over the border in Pakistan). The military adopted a revised counter-insurgency strategy in 2006 that endorsed more engagement with the civilian population and less reliance on traditional military tactics. For Capt. Flood and his fellow soldiers, this means more than providing bricks and mortar. He and his fellow soldiers are familiarizing themselves with local culture and those who’ve been to the country several times, like Capt. Flood, have begun to learn Dari (Farsi), the official language of Afghanistan.

The Captain’s unit assessed the area around their base and met with the headmaster of the local girls school. It was clear that both the girls and boys school needed significant help with everything from classroom materials to security. 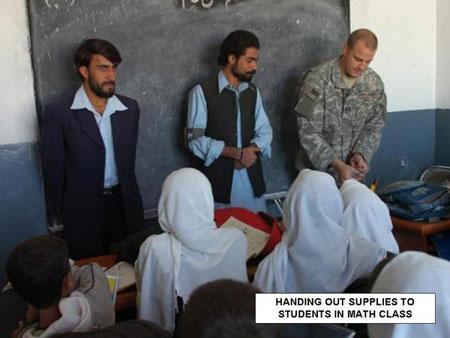 “They gave us their priorities, and we brought them back to our camp and rated them on a scale of feasibility,” Capt. Flood said. “The first priority of most people is a sense of security. The schoolgirls had been getting harassed by the boys’ school students and the school’s windows and doors were damaged. There was a partial wall around the schoolyard, which limited access to a degree, but it had not been completed and there was a 250-meter section of it that was missing (i.e. no security). The wall became priority number one.”

When the Captain’s Special Forces group arrived in the area, the schools lacked electricity, running water, clean bathroom facilities, sufficient desks, protection, and even the basics – pencils, paper, and schoolbooks.

Approximately 2,000 girls and 3,000 boys attend the two schools. The boys range in age from 11 – 19 years, while the females are 11 – 25. The age range of the girls is wider because females were not allowed to attend school under Taliban rule.

Flood’s unit has since completed the wall, repaired windows and doors, built desks, repaired the well, sinks, and bathrooms, and with the help of donors in the United States, have been able to provide essential learning materials. As a result of these efforts, attitudes among the locals are changing.

The children of Afghanistan are desperate for school supplies. Contributed.

“There is a bond that is developing between us and the local citizens of Afghanistan,” Flood said. “As we have demonstrated by our actions that we care about them and their future, they have demonstrated their support of us by strengthening the security for the service members located at the neighboring airbase. Because of our reliance on one another in order to fulfill each of our basic needs, the children are growing-up with a sense of hope. That same glimmer of hope is also returning to their parents’ eyes, after nearly a half-century of war.”

So much is criticized about U.S. strategy in Iraq and Afghanistan, often rightfully. As leadership has shifted, goals altered and strategies changed, however, the men and women of the armed forces must soldier on, carrying out whatever orders they are given as best they can. Trying to improve the situation, to win the war, to improve the lives of people they barely know, and ultimately trying to get home again.

These unfortunate wars are usually judged in broad terms – how many troops are deployed, how many dollars are spent, how many have died. Maybe this is necessary, and surely those numbers are part of the telling, but the most accurate measurables are much more complicated, and the effort may ultimately be judged in smaller frames. And from afar, it seems securing a child’s safety, building a school, and even providing a backpack, is a step in the right direction.