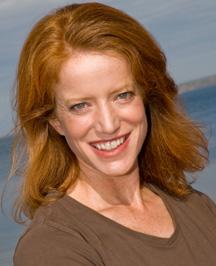 When local actress Amy Ensign teaches acting workshops as a part of the Exposure to Creativity program at Gibraltar High School, she not only shares her craft with students but also insights that she has gained from a life that has included years of extended sailing adventures.

Ensign is well known to patrons of Door Shakespeare, Isadoora Theatre, TAP Works, Theatre M, Teatro Caravaggio, and other peninsula performance venues. But her route to a career as a professional actress followed a different path than the one of most other stage performers.

When Amy was a girl, the daughter of a father who was a career Army man and a mother who was an artist, she attended performances of The Glass Menagerie and Our Town.

“After I saw Laura and Emily in those productions as it little girl,” Ensign said, “I wanted to be an actress!”

Young Amy had studied dance, voice, and acting as a schoolgirl, and in college she realized that she needed to make a choice.

“The area where I had the least experience was acting,” she said, and subsequently entered the University of Washington School of Drama. She also studied with the Suzuki Company of Toga in Japan during two summers.

“After drama school,” she said, “I did not have the fortitude to knock on as many doors as I needed and to be confident in the strength of my own work.” Instead, she took a job as a regional trainer for an English-based retail company operating in the Northwest. She worked with the staffs of new stores in product knowledge and sales techniques.

One day a British colleague asked Ensign to describe the perfect person for her. She did, and her friend said, “I know him!” Brit David Foulds and Amy Ensign embarked not only on an adventure in marriage, but in sailing.

Amy and her husband David waited out a storm at this dock on the north end of Fogo Island, Newfoundland.

Using San Francisco as a base, for a decade beginning in 1995 the couple circumnavigated the Americas in their 33-foot sailboat, enjoying extended trips that were subject only to weather, their location, and “what our pocketbooks looked like,” she said.

Between trips Foulds worked as a carpenter and Ensign as a sailing instructor. She is both a U.S. Sailing licensed instructor and a US Coast Guard licensed captain, licensure that allows her to sail boats from one location to another for clients.

Typically the couple docked their own sailboat at whatever spot their travels had taken them, flew back to San Francisco to work, and then returned to their craft for the next adventure.

During this time Ensign’s father retired from the military and settled in Sturgeon Bay with his wife. Between trips, Ensign and her husband visited them. After the birth of their son Owen (now six) the couple began looking for a place to settle, and Door County became the spot. Now they make their home in Sturgeon Bay.

Foulds works for Great Lakes Yacht Services, using his skills in marine technology. “David has sailed on boats for so long, he can fix anything on them!” Ensign said.

“I was not an actress when we moved to Sturgeon Bay,” she continued. “I had hoped to get back into acting, and started to become involved in theater through community based projects.”

Portia in Door Shakespeare’s The Merchant of Venice was one of her favorite roles as she resumed her career, and especially she liked the small part of Verges in Much Ado About Nothing this past summer. 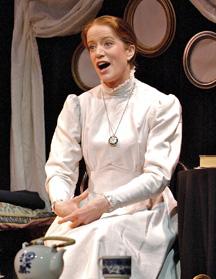 Amy Ensign as Emily Dickinson in The Belle of Amherst. Photo by Len Villano.

“It stretched my boundaries,” she explained, “playing an unattractive old man with blackened teeth, bushy eyebrows, a very loud voice – people were repulsed by me!”

She also remembers the “magical experience” of playing Elmire in Tartuffe, her first performance with Door Shakespeare.

After moving to Door County, she had the opportunity to realize a childhood dream by portraying both Laura in The Glass Menagerie and Emily in Our Town.

“I was 35 when I played Emily,” Amy said. “I had had life experiences, had a child, and I realized that as we get older, our life enhances our work as actors.”

Playing Emily Dickinson in The Bell of Amherst was one of her first roles on the peninsula, important for her because after meeting the emotional and physical demands of a one-person play with success, “I realized I can do anything!”

Portraying Mags in Painting Churches was also a rewarding, as “I learned an incredible amount while doing it.” And Susan’s monologue “A Bed Among the Lentils” from Talking Heads was a part “that I felt I was made to play. I could perform that role for a long time and never be tired of it!”

The director wanted her to make connections with the audience as the character Susan.

“I was tentative about this!” she said. “But it ended up being something that I really started to see the value of. Almost all of the time I’d get a response, and sometimes it would take the piece a different way. This helped me learn to listen to the message the audience was giving me.”

Ensign feels grateful to have the support of her husband. “David is very happy to allow me to pursue my craft and to be a mom.”

In addition to her work as a professional actress, Ensign finds time to share her skills with students. She taught theater arts with the Culver Educational Foundation in Indiana and Kiddie Kenetics with the Door County YMCA.

Now as a part of Door Shakespeare’s community outreach, she and Suzanne Graff (Door Shakespeare’s artistic director) are offering acting workshops for the Exposure to Creativity program at Gibraltar High School (November 22 and December 13). The Friends of Gibraltar and the Hardy Gallery jointly sponsor this annual event.

In addition, she and actor colleagues will be working in classrooms of Door County schools for Door Shakespeare’s Shakespeare in the Schools program. At present they are scheduled to make presentations in Gibraltar High School English classes.

Learn more about Amy Ensign and her performances in Door County at http://www.amyensign.com.