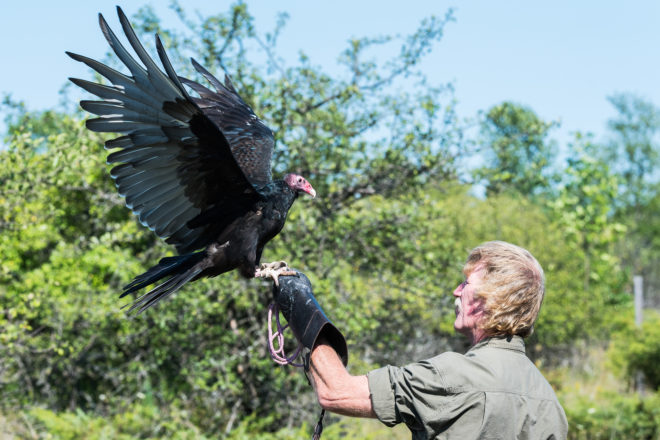 Rob Hults holds Amber, a three-year-old turkey vulture, whose home is the heated structure on the property. The building gives the organization the ability to house birds that would otherwise migrate south for the winter.

Rob Hults and Jillaine Burton Seefeldt walked along the path of the Open Door Bird Sanctuary and pointed out that the grass was cut. To them, it was something worth pointing out.

Up until a volunteer donated a new lawn tractor to the sanctuary, they were chugging along with a perpetually broken mower that was older than any of the birds at the sanctuary.

“We showed that we are willing to make do,” Burton Seefeldt said. “We’re going to make it work. People see that.”

The structures that make up the green side of philanthropy in Door County have some impressive capital campaigns linked to them. The Ridges Sanctuary recently finished up a $3.5 million fundraising campaign for the new Cook-Albert Fuller Center. Eagle Tower will be rebuilt with a multi-million dollar price tag. It’s easy to forget that many of the great structures of Door County’s environmental culture today were first built decades ago with little more than nickels, dimes and hard work.

At seven years old, that’s right where Open Door Bird Sanctuary (ODBS) is. But, with an annual operating budget of just $30,000 to cover everything from bird care to utility payments, Hults and Burton Seefeldt don’t shy away from that challenge.

“When we started doing this, at the time, we were selling blue sky,” said Hults, remembering the early days of working with birds out of his house next door to the sanctuary and doing off-site programs to garner support for their vision.

The first few off-site programs helped fundraise enough for a modest mews — the name for a bird enclosure or aviary. Paul and Fran Burton were two of the first big supporters for the sanctuary after Hults did an off-site program in Ephraim. 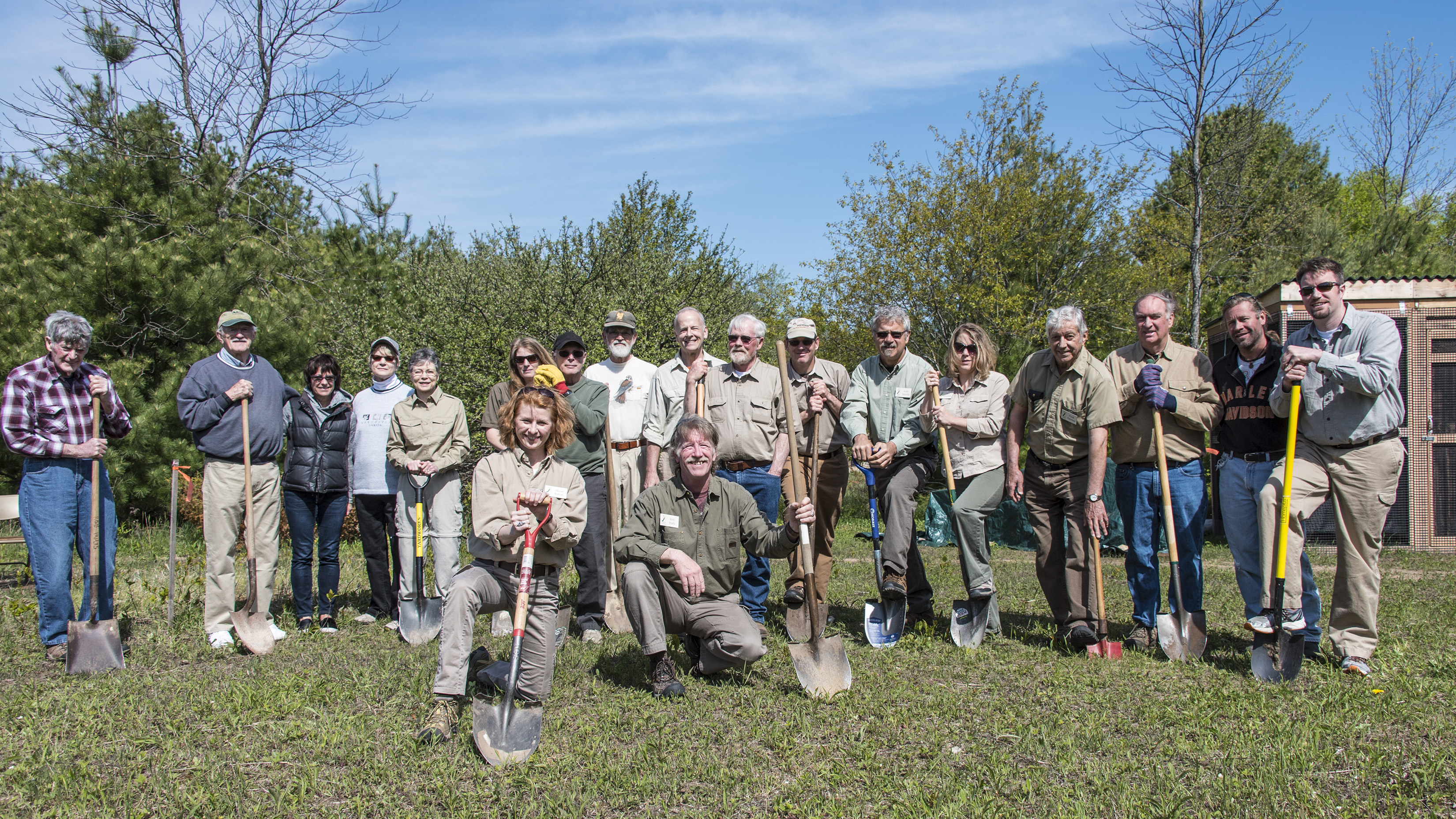 A group of volunteers along with Jillaine Burton Seefeldt and Rob Hults prepare to break ground on the eagle aviary, a capital campaign project started by some locals with the goal of bringing a bald eagle to the property in 2018.

Burton Seefeldt used the word “serendipitous” describing the moment work began on the first mews while, simultaneously, a bird rehabilitator in southern Wisconsin retired and was looking for a single home for nearly a dozen injured birds.

The obvious mission of ODBS is to provide a home for injured birds that will likely never be able to survive in the wild.

“There’s probably two birds here that could potentially live longer than either one of us, so when we say we’re going to take a bird you’re making a lifetime commitment,” Burton Seefeldt said.

But that mission is also an avenue connecting people with the natural world they are impacting.

“We can show people that doing something a little bit more positive for the environment can affect them,” Burton Seefeldt said. “Those birds that were affected by a car strike, we can continue to help them because we can give them a home.”

“People were donating with the hope that we would be able to develop this and be successful and then when you combine in a larger sponsor like the Burtons or Raibrook [Foundation] that helped chip in on this, that pushed us over the edge,” Hults said, calling back to the hooting barred owl, Radar, resting snugly on a heated perch in the back of the mews.

To anyone visiting, the edge Hults referred to wasn’t a very big one. ODBS could now house a few large and small birds in enclosures barely bigger than a garage. It gave people the opportunity to visit the property instead of waiting for the next off-site program.

For the organization, the small mews was a watershed moment, giving them something other than blue sky to sell.

Burton Seefeldt said the biggest shift she saw in support after the first few structures were built came from locals.

“Locally, in the last probably two years we’ve seen such a stronger interest level and investment level,” Burton Seefeldt said. When ODBS started their annual fundraiser, the Hoot-e-Nanny, “One of the things that we heard from so many people after the first year was, ‘Wow, I came because I wanted to support you but I didn’t think I was going to have fun.’”

The first few birds of prey gave ODBS a product to sell to visitors and a home base to invite the public and cultivate interest and recognition.

Once again, it was Fran Burton who pushed ODBS over the next edge, but only after seeing what Hults and his group of volunteers were able to do with the first investment.

“They see a building like this that we’re able to build and maintain for the money that we invested in it,” Hults said. “We feel very, very confident that any philanthropic dollars that get invested in Open Door Bird Sanctuary are going to be stretched and spent as well as they can possibly be spent, and we can illustrate that to people and that helps us a lot for our fundraising.” 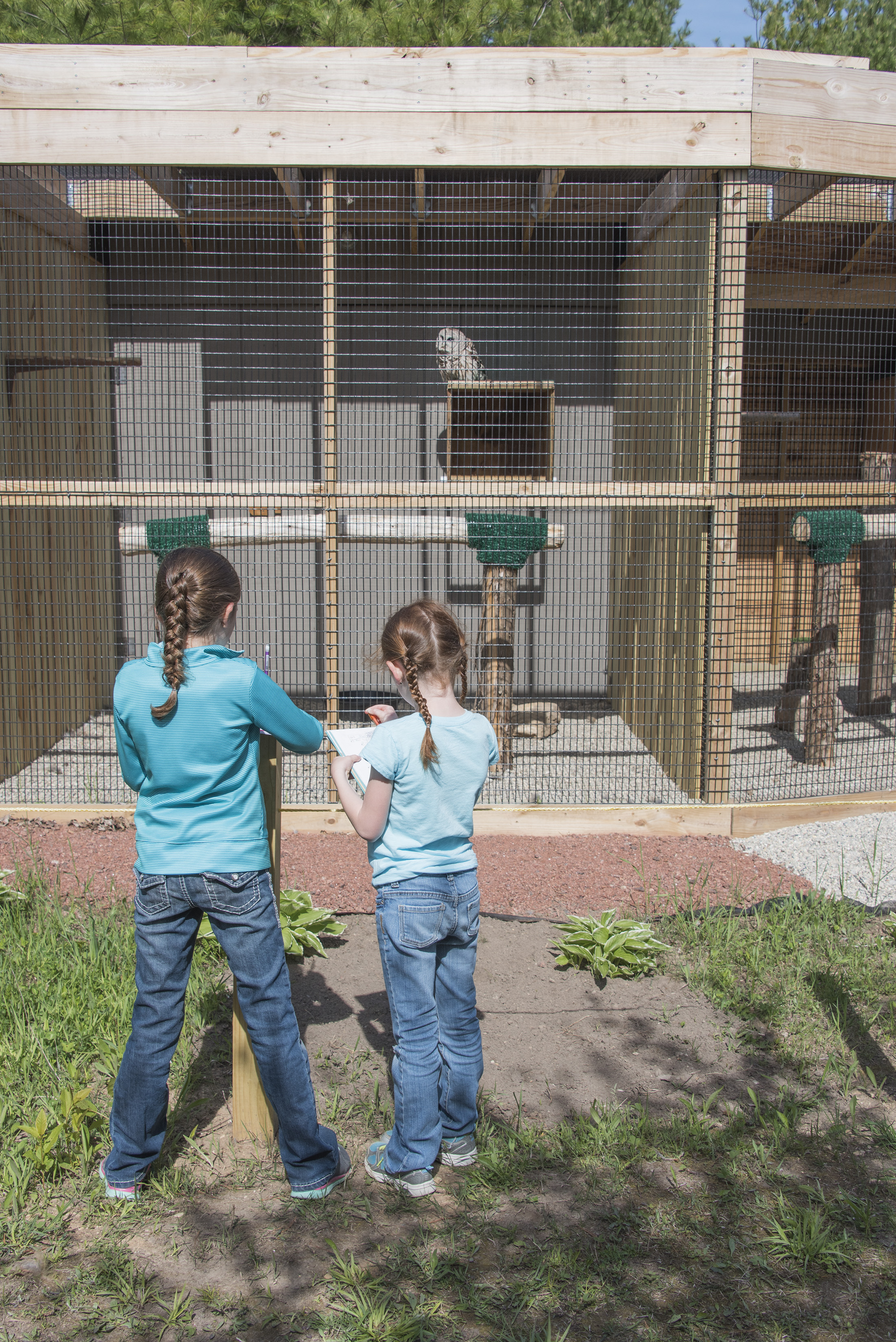 The bird mews at the Open Door Bird Sanctuary was one of the first to give the organization a way for visitors to interact with the birds. Photo by Len Villano.

The Burtons helped fund the next project on the sanctuary’s 34-acre property — a heated building in which to house injured birds and perform basic procedures to help rehabilitate and train the birds.

The building is as modest as the mews. It is about the size of a garage and has a garage that’s not big enough for a car. Small bird enclosures line one wall and it’s hard to tell they were built with scrap wood for less than $50. Hults and Burton Seefeldt laud the bathroom, still appreciative that they can even have a bathroom in the first place. They explained it all over the sound of a turkey vulture’s wings flapping irregularly.

“People know that we stretch a dime into a dollar here,” Hults said. “We don’t have billions of dollars to work with and we’re not looking for ways to spend money, we’re looking for ways to save money. I think donors and people that are sponsoring things like this, they see the bang we get for our buck and that makes a huge difference.”

As a young organization, Burton Seefeldt said a challenge of fundraising was gaining the trust of donors small and large.

“We’ve been here for 7 years, not 30, not 50,” Burton Seefeldt said. “We’ve really been able to build trust with people who know that when we say we’re going to do something we do it.”

Paul and Judy Schumacher trusted the group when they donated funds to construct a small bird mews on the property as a memorial to their parents. Hults designed the building and, with a group of volunteers, finished it this year.

“When you look at the longevity of an organization… they are seeing that this is not a couple of people who want to come out and play with birds for a few years,” Hults said. “Open Door Bird Sanctuary is our legacy to Door County.”

Amber, the three-year-old turkey vulture, could outlive him, Hults said.

Eye on an Eagle

As Hults was walking a few locals through the winding trails, they asked, “Why don’t you have a bald eagle?”

Burton Seefeldt joked that there was a little more to it than going to the eagle store, but with the help of that group of local visitors-turned-volunteer fundraisers, the ODBS is quickly headed toward its next structure:  an eagle aviary.

“They kind of banded together and started the fundraising process and kept us engaged,” Burton Seefeldt said. 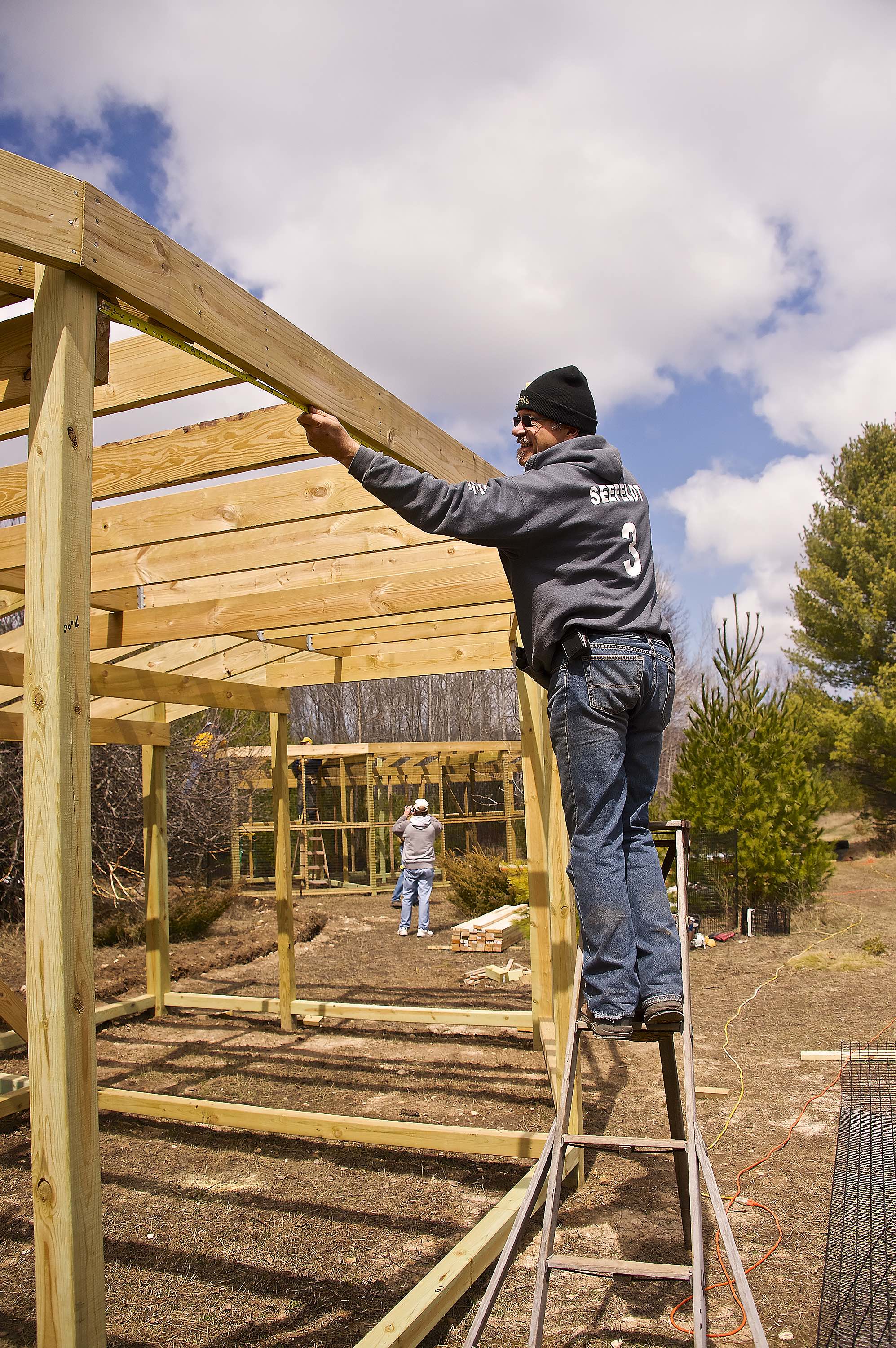 With very little capital to put toward the project, ODBS had to take a back seat on fundraising for the eagle aviary until this group of volunteers had created a foundation to build on. Hults educated the group on just what it would take to bring an eagle to Door County and they have taken it from there.

“They asked me to come up with a comprehensive plan, building plans, building costs, food, medical costs, because that all has to tie in,” Hults said.

“We as an organization didn’t have this little nest egg somewhere where we can throw this at a project,” Hults said. “We didn’t want to pull the trigger on buying materials and that until we hit some certain fundraising benchmarks.”

The group managed to secure enough funds to get the project rolling and, with posts already in the ground before the winter frost, ODBS and its volunteers are able to build during the winter. Hults hopes to have the eagle aviary complete by spring.

Hults believes part of what makes ODBS so successful is the flexibility with donations. While they have a master plan with a visitor center and rehabilitation clinic on the wishlist, the grassroots nature of the group and a near-blank 34 acres to work with means they must incorporate the philanthropy they are afforded even if it is different than what they had in mind.

“When an opportunity arises, we’re able to shift gears a little bit and change things,” Hults said. “We’ve never really had this giant fundraising for this big project. We just kind of work on it and over time you can see, little by little, things go up.”

With the Schumachers’ donation of a small bird mews, the group was able to shift gears to both accommodate the will of the donor and build something new to enhance the experience of the visitor.

The eagle aviary benefitted from the same flexibility. A group came to the staff with an idea and, after a bit of budget planning and a quick reworking of the agenda, they were headed skyward.

Every organization is grassroots in the beginning. Some survive to become major players in philanthropic conservation — The Ridges, Crossroads at Big Creek, the Door County Land Trust — while others lose support or a key figure in their structure and fade away.

After seven years, ODBS has managed to retain the same grassroots work ethic that created the support structure they still enjoy. Decades from now, the first seven years will be remembered as the early fledgling days when a group of hardworking bird lovers stretched a dime into much more than blue sky.