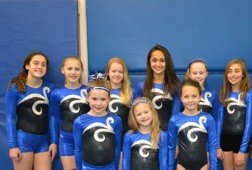 Nine talented gymnasts from the Door County YMCA Strivers Gymnastics Team traveled to Wichita, Kansas for the 2015 YMCA National Gymnastics Championships, June 24 – 27. This event features YMCA gymnasts from all over the United States.

Gymnasts will have the opportunity to showcase their talent and hard work during this competition. The competition begins with an Olympic style Opening Ceremonies on June 24, which has been officially recognized as an Olympic Day Event by the United States Olympic Committee.