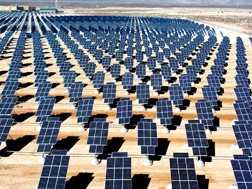 Wisconsin Environment Research & Policy Center released a new report: Lighting the Way: The Ten States that Helped Drive America’s Solar Energy Boom in 2013, showing strong solar growth across the nation including a 17 percent increase in Wisconsin in 2013. The report emphasizes that it is not availability of sunlight that makes states solar leaders, but the degree to which state and local governments have created effective public policy to help capture the virtually unlimited and pollution-free energy from the sun.

Wisconsin’s progress on solar has helped fuel a tripling of solar energy nationwide between 2011 and 2013. In 2013, solar capacity in Wisconsin grew from 14 MW to 17 MW.

“Solar energy is emerging as a go-to energy option in Wisconsin and across the country,” said Ellen Ziesenhene, campaign coordinator with Wisconsin Environment Research & Policy Center. “While some progress has been made, this pollution-free energy option could play a much bigger role in that helping us meet the carbon pollution reduction under the Clean Power Plan.”