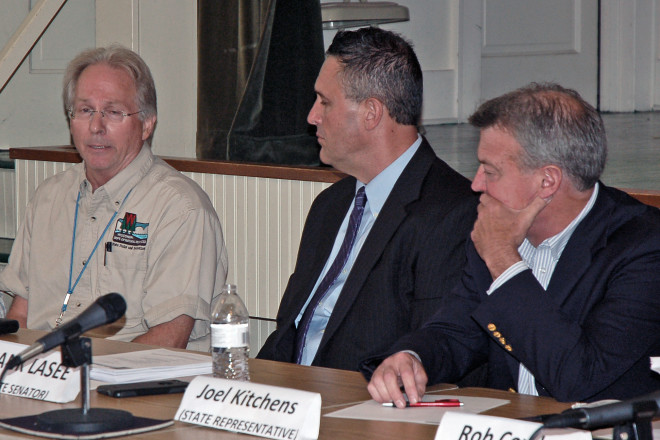 Rep. Joel Kitchens (right) and Sen. Frank Lasee listen to Jeremy Leiterman of the DNR give his introduction at the Eagle Tower listening session held in Fish Creek on Sept. 14. Photos by Jim Lundstrom.

About 80 people filled the old Gibraltar Town Hall the afternoon of Sept. 14 to speak with nearly one voice to keep Eagle Tower in Peninsula State Park.

A listening session on the tower was called for by Republican state Senator Frank Lasee, who was joined by Sen. Robert Cowles, 1st District Assemblyman Joel Kitchens, Phil Berndt of the Door County Visitor Bureau, Gary Kemp of the Friends Of Peninsula State Park, Brian Kelsey of the Fish Creek Civic Association, and two representatives of the Wisconsin Department of Natural Resources, which has oversight for the state park system.

In his letter announcing the listening session, Lasee wrote, “I fully support the reconstruction and, if necessary, replacement of Eagle Tower so that future generations may enjoy this historic site and share in the grandeur of Wisconsin’s State Parks.”

Lasee reiterated that support at the listening session by saying Peninsula State Park has one million visitors a year, and at least a tenth of those visitors once climbed the tower.

“I’d like to see it open for next season,” Lasee said, and once the tumultuous applause subsided, added, “That’s going to take some doing, if we’re going to do that.” 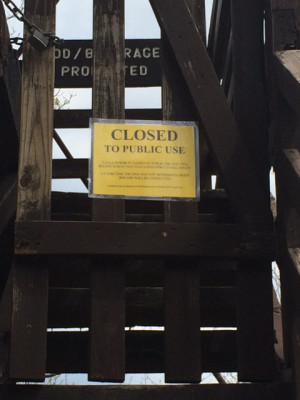 Eagle Tower is currently closed to public use.

Jerry Leiterman, the DNR’s northeastern Wisconsin parks superintendent, started the session off by recounting the recent history that closed the tower last spring. He said the 75-foot, 80-ish-year-old tower was subjected to a detailed inspection in April, and the subsequent report recommended that the tower be razed, at which point the tower was closed to the public.

“I just want to be very clear,” Leiterman said. “The park has not made any final decisions. We view this as a starting point, moving forward to engage the public.”

Leiterman said the master planning process for all five of Door County’s state parks begins in December, and the fate of the tower will certainly be a part of that process.

Lasee said what appears to be a simple issue is complicated by the fact that if a new tower is built, it would have to abide by a different set of rules than those used to build the tower in 1932, including complying with the American with Disabilities Act, which would mean adding an elevator to the tower, which, of course, would drive up the costs.

Kitchens said there is no question that a tower should be in the park. His preference is to repair the current tower, but rebuild if necessary. “There is a huge will to get this done,” he said.

Berndt said the DCVB stands strongly in support of the tower and described it as “almost a holy grail” for visitors to Door County.

Kemp of the Friends group praised “the very good news” Leiterman had delivered regarding the master plan for Door County parks.

“We have been trying to have a master plan started the last 10 years, but it kept getting kicked down the road because of other things of greater importance in the minds of the DNR,” Kemp said.

“This will do a lot, not only for the future restoration or rebuilding of the tower, but for all the parks in Door County. So that was a very significant piece of information that we received.”

He pointed out that a master plan process can take anywhere from 18 to 24 months.

“Therefore, this is almost a moratorium placed on this action by the fact that they are going to place it in the master plan,” Kemp said.

Brian Kelsey then read a statement (see his statement on the Perspectives page), and the session was opened to the public, with two minutes allotted to each of the 20 speakers, who ranged from visitors to residents to public officials, all expressing the importance of Eagle Tower to Door County’s culture, history and economy. 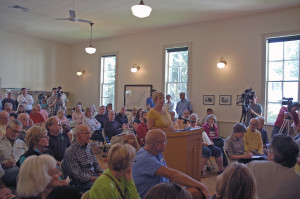 Carol Hackett, granddaughter of A.E. Doolittle, first superintendent of Peninsula State Park, said her grandfather wanted to share the beautiful vistas of the park with the two observation towers that went up under his tenure.

“There are 12 cousins remaining. I’m speaking for all of them, too,” she said. “My grandfather died when I was quite young. He came here with his family, a large family, in 1912. His vision from Day One was tourism. The towers were within the first two years of his agenda. They were lookout towers, but the main thing was to attract tourism. He wanted to share the beautiful landscape and the splendid view from the top of the tower.”

“This is Northern Door’s Steel Bridge,” said Christie Weber, who led the efforts to save the Steel Bridge in Sturgeon Bay. She said the DNR lists the tower as a historic fire tower, and that there are “huge amounts of money out there for fire towers,” she said.

The new owner of Village Green Lodge in Ephraim got a laugh when he introduced himself as Mike McCarthy. “You were expecting a different Mike McCarthy,” he said.

McCarthy seemed to be in the minority by suggesting the old tower be torn down and turned into small pieces of memorabilia that can be sold to build a brand-new ADA-compliant tower “allowing access for everyone,” he said.

Holly Cole said her family – like many others – has been visiting Door County for more than 100 years, and recounted being on the tower with other families with an extension cord and a fuzzy black & white TV on July 20, 1969, to watch the United States land on the moon.

Asked by Gibraltar Road resident Chuck Schott how much Peninsula State Park brought into the state in revenue each year, Leiterman of the DNR said he did not know. Asked how much the park golf course – the only one of its kind in the state – brought in, Leiterman said he did not know, to which Schott replied, “I do! It’s more than $200,000 a year.”

But Leiterman did say that the five state parks in Door County account for 20 percent of all state park revenue.

Gibraltar Town Board Chair Dick Skare said the town and park are so integral to each other, the town would like to be a partner in the future master plan discussions, and added that the tower is such a focal point of the Door County experience that something must be done quickly. “Twenty-four months, that’s too long,” he said. “Let’s go for a year.”

Pauline Johns promised to be a rabble-rouser with her comments. “Open the tower. Put up a sign. Climb at your own risk. You’re keeping people from having memories and that’s going to affect our future generation.”

Filmmaker, engineer and inventor Tim Erskine was the final speaker. He said the “continuity of shared dreams” must be kept in that spot, and fixing the existing tower just requires some out-of-the-box thinking, such as fitting it with an exo-skeleton.

In the meantime, Sen. Lasee will continue to accept your thoughts on stories on Eagle Tower. Email [email protected] with the subject line: “Protect Eagle Tower.”