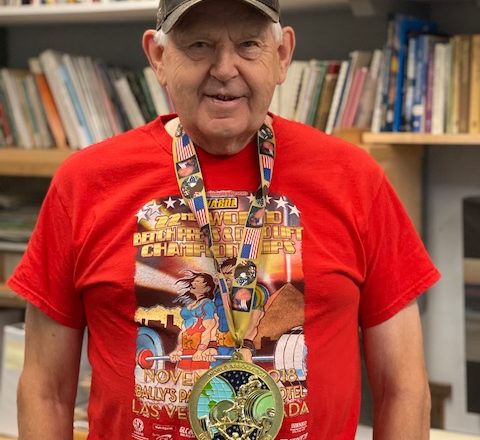 Sigurd Sandstrom, an 81-year-old part-time Door County resident, continues to push the boundaries of age. Tales of his power-lifting exploits have appeared in this paper before, and he has now added a new achievement to his résumé.

Sandstrom set a new world record in the deadlift for athletes ages 80-84 by lifting 270 pounds at the World Association of Benchers and Deadlifters’ competition June 5. He was the only competitor in his age bracket, but a check of the record books revealed that nobody has officially lifted more than the man who goes by “Sig.” He now holds nine records overall.

Sandstrom started lifting seriously at age 70, and he began competing at 77. He said he hasn’t been too concerned about getting injured.

“You don’t have to if you do it right,” he said. “You need to have the right form, build a strong core, and do a lot of hamstring and whole-body work.”

He lifts several days a week, though he says he may not do competitions much longer. Then again, he’s been saying that for years.

“I’ve always been a person that wants a challenge,” he said. “I love people that tell me I can’t do something.”