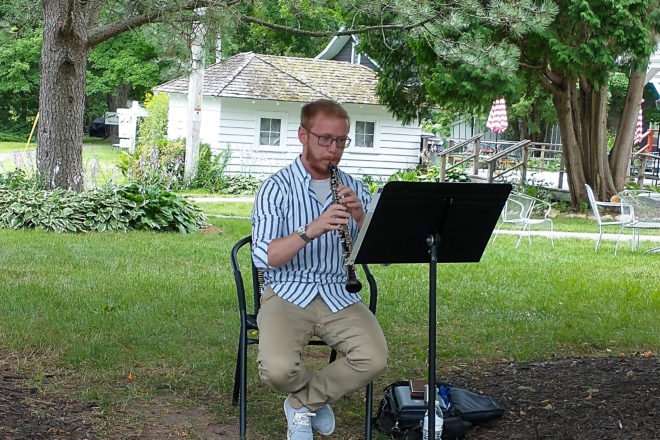 The oboe’s distinctive sound lends itself well to solo performances. Stuart Sutter plays to a courtyard audience in the casual atmosphere of The Ginger House.

Music permeated the courtyard at The Ginger House during its weekly Thursday concert, but for this performance, there was no guitar amp or sound system, no vocalist, no microphone in sight – just Stuart Sutter playing his oboe, sitting with a music stand among the trees.

Sutter filled the space with timeless Mozart and Bach melodies. He demonstrated the beautiful range of the oboe, from the richly colored low pitches to effortless-sounding high notes. His classical selections – mixed with tunes from movies such as Sleeping Beauty – took me back to my high school and college band rooms. Incorporating musical repertoire that spans centuries is a sure way to please everyone in an audience, and musicians often appreciate rehearsing the variety, too.

I’ve been fortunate to be able to continue playing in my university’s community band during the school semester through most of the pandemic. The University of Wisconsin-Milwaukee implemented an array of musician-specific COVID-19 precautions such as instrument covers and special masks, along with rotating rehearsal spaces frequently. But not every performing-arts organization or solo performer had this opportunity – Sutter hadn’t performed in public since Christmas Eve of 2019.

“It’s different, but I like playing outside,” he said. “I enjoy playing outdoors with orchestras, too.”

I always appreciate outdoor music – and not only what’s played on an outdoor stage or restaurant patio, but in the midst of flowers and trees as Sutter’s courtyard appearance was – and as an oboist myself, I was particularly drawn to his performance.

Traditionally, large ensembles have only two oboes – compared to six-plus flutes, trumpets, violins and the like – and people sometimes mistake the instrument for a clarinet. They’re both woodwind instruments, but an oboe plays in a higher key (C, the same as a flute) and uses a double reed. Clarinet and saxophone reeds are a single piece of cane that sits against the mouthpiece of the instrument, but a double reed is the mouthpiece: two pieces of cane that vibrate against each other. Oboists (and bassoonists) actually make their own reeds, so they take on learning this process in addition to learning to read music and play their instrument.

Sutter has played oboe since he was 10. He earned his master’s degree at the University of Minnesota-Twin Cities, and in addition to freelance performances, he’s worked as a teacher, music librarian and member of the St. Cloud Symphony in Minnesota.

Even for a seasoned musician, there’s something sublime about observing the beauty of a classical instrument live and up close – especially the complex arrangement of keys on a woodwind. The early evening was cloudy, but still, Sutter’s oboe glistened with silver with gold detailing. He even played “Somewhere over the Rainbow.”

The oboe has a very distinct sound that can easily pervade a setting, which makes it perfect for a solo classical performance. I enjoyed this chance to settle my attention on the sound from just one instrument, absorbing the gradual dynamic changes and delicate vibrato of Sutter’s playing.

When time permits, he and his mother also enjoy rehearsing duets, such as the Bach Concerto for Violin and Oboe in C minor. And when he’s not working at Chef’s Hat, Sutter is happy to be making reeds and looks forward to performing again this summer.