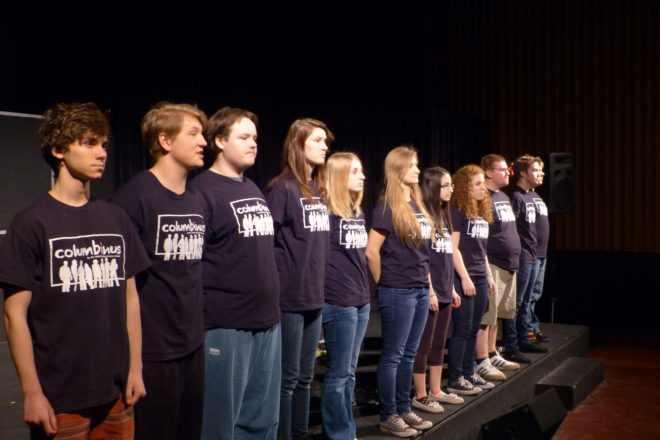 It helped me understand what the students went through and what they felt and experienced that day.

– Dylan Thornton, cast member of the 2014 production of columbinus at Third Avenue Playhouse

In the spring of 2014, 11 Door County high school students participated in a production of columbinus at Third Avenue Playhouse (TAP). The play, which I chose and directed, contains the actual words of teenagers from around the country explaining their struggles and fears growing up in today’s world.

Those feelings are acted out in very different ways including, as depicted in the play, the two teenage boys who went on a murderous rampage in their high school on April 20, 1999. At the end of that horrific day 12 students and one teacher were killed and 24 wounded before the two boys turned the guns on themselves.

We had long internal discussions at TAP about whether the play was appropriate for students of that age. The language was rough and crude, and the situations depicted were awkward at best and tragically graphic at worst. We finally decided the importance of the subject matter made it worth the risk.

Parents of potential cast members were informed exactly what their children were getting into. Copies of the script were offered for them to peruse. No one would be allowed in the cast without their parents’ understanding and approval. Out of the 12 originally cast, only one parent said no, leaving us with 11.

extremes of teenage life without talking down to anyone or watering down the issues it discussed. 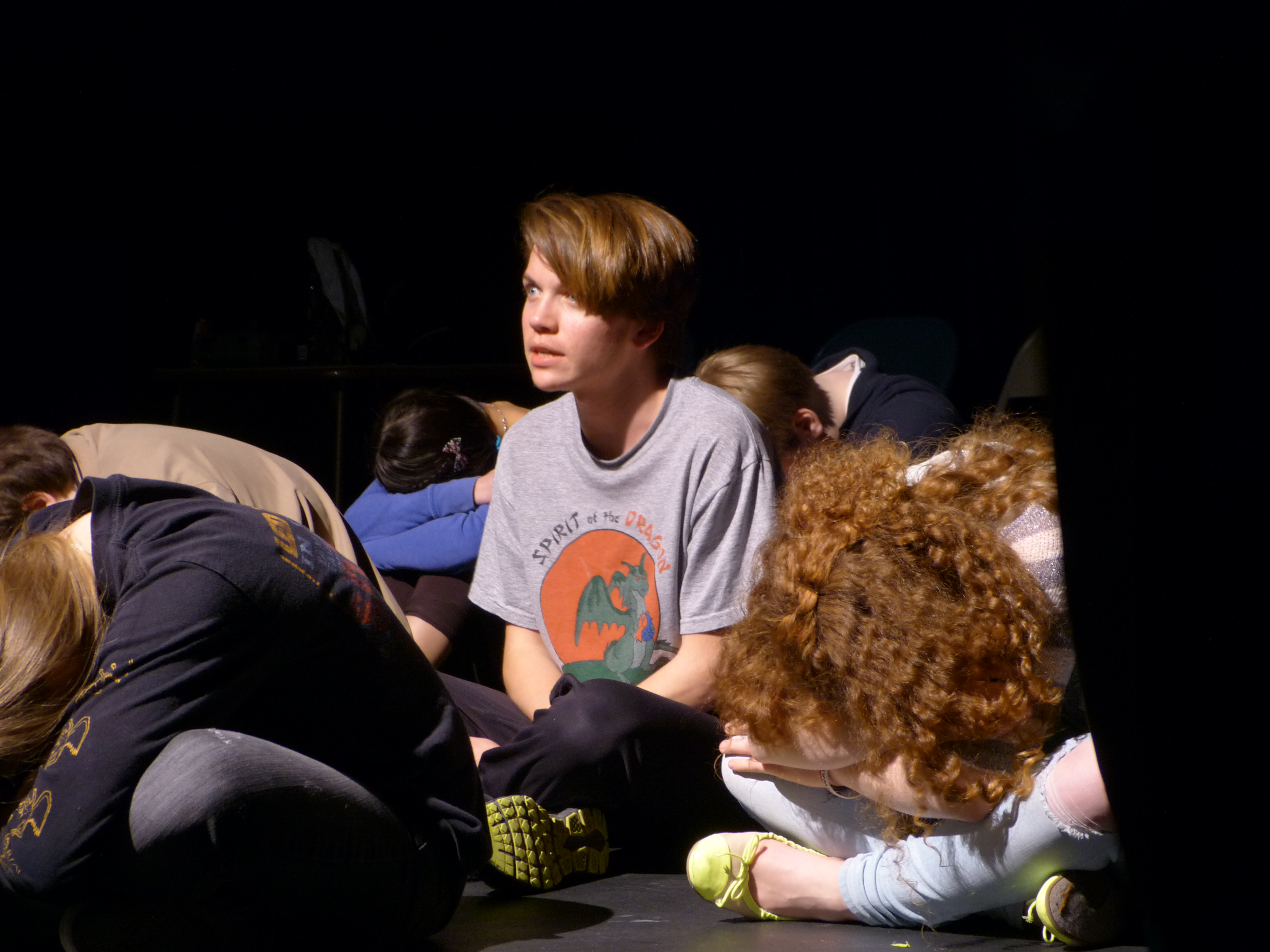 At the first rehearsal, I asked them if the rough language of the play bothered them. Would they have a problem saying these words? Without hesitation, they all said no.

They hear these words on a daily basis. No big deal.

Were the characters in the play familiar? Not only were they familiar, they were people they knew quite well. They were their friends, family, classmates, and most importantly, themselves. They knew these characters inside and out, far better than I ever would:  those who always feel they are never good enough, pretty enough, tough enough, straight enough or smart enough. They knew them all.

Personally, as a future teacher, the recent school shootings in Florida and many other schools have encouraged me to really understand the procedures in the event of a school shooting.

For me, the most startling part of that first discussion with the cast of columbinus happened when I asked them how many mass shootings they could recall in their lifetimes. Without hesitation, they started rattling off a number of shootings around the country as if they were relating football statistics. Virginia Tech. Aurora. Sandy Hook. These events for them were commonplace. Horrific, yes, but commonplace.

Many had a vague recollection of Columbine (it occurred when most of them were quite young), but other incidents were much clearer. When I was their age I wouldn’t have been able to name a single one.

How times have changed.

Students have grown up with school lockdown drills to protect them from potential threats (as I write this, Sevastopol School is in lockdown). I grew up with fire drills and hiding under desks in case a nuclear bomb dropped on my school. Seems almost quaint now.

I asked them why did they think it was important to do this play here in Door County. After all, we live in an almost idyllic spot, don’t we? It’s certainly beautiful and peaceful. It attracts thousands of visitors each year for that very reason, as well as many others who choose to move here from all walks of life.

Something like Columbine could never happen here, could it?

Not only did they think it could happen here, but they wouldn’t be surprised if it did.

I’ve never looked at a passerby on the street the same way since. columbinus taught me that we know so little about the experience of others; we never know what someone is struggling with. 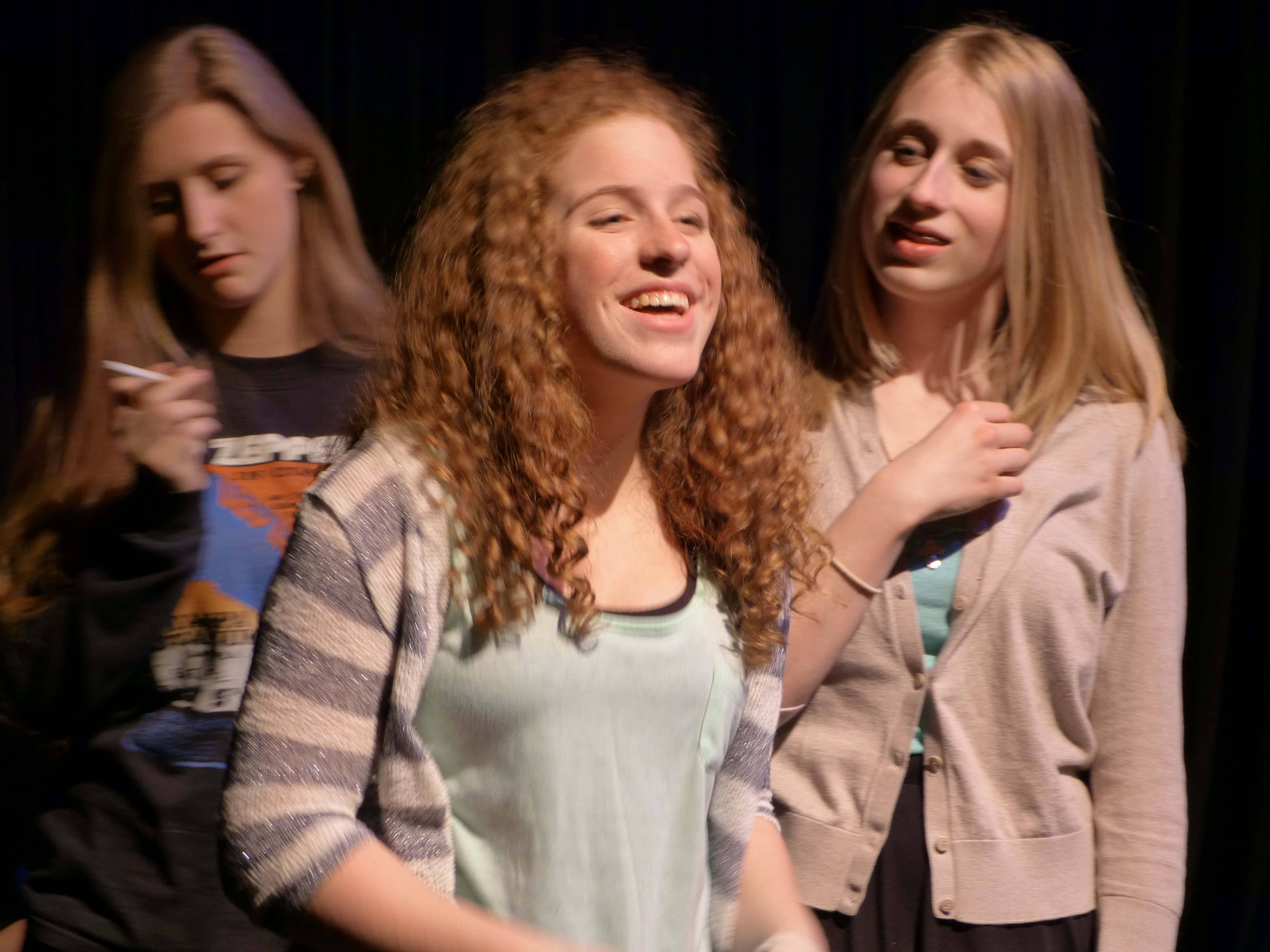 It could happen anywhere at anytime. It was important for them to get that message out to the community.

This cast of 11 Door County students was remarkable. They worked as a tireless unit during the many weeks to bring the play to life. In order to do this, they had to confront and display aspects of themselves and others that were often uncomfortable and deplorable. But in the end for them it was the importance of relating the facts as they exist that carried the day. It wasn’t simply a school play, it was a mission.

After each performance we held a talkback with the audience moderated by members of the faculty who specialized in areas of mental health and criminality. These discussions were impassioned and sometimes would last an hour or more.

When you are in that audience watching two teenage boys formulate a plot to blow up half their school with propane tanks, and then you hear accounts from survivors on how they watched their friends get murdered right before their eyes, the events become a little more real.

– Dominic DiCarlo, now a student at the University of Chicago

The reason this play is so powerful is not simply because of the words of characters written down on the page, but because of those students who spoke those words. They were speaking for hundreds of thousands of fellow students all over this country who go to school every day receiving lessons in geography, algebra and survival.

The recent school shooting in Florida brought out the usual expressions of thoughts and prayers from lawmakers. There were the usual calls for an end to gun violence and tighter gun laws. There were the usual accusations of one political party accusing another party of callously politicizing a tragedy. And there seemed to be every reason to believe that once the bodies were buried and time had passed, the outcries would cease – until the next mass shooting.

I believe that our generation may be taking the right steps in order to help prevent further mass shootings.

But this time feels different. In fact it feels very different because the voices of the students – not just the politicians or the NRA – are being heard and listened to.

The reaction from the community to our production of columbinus was astounding. People came out of the woodwork to see and experience this event. It’s important to point out that the messengers for this event were not professional actors or politicians. They were high school students. They were high school students with a powerful message, made even more powerful by their presence.

columbinus served as a cornerstone for me in many ways; it made me realize how potent the arts are, how harrowing the Columbine High School events were, and how we must not pretend like “it could never happen here.”

Robert Boles was born in Ohio, raised in Arkansas, and moved to Door County in the fall of 2011 after living more than 30 years in New York City pursuing a career in the performing arts. He has performed on Broadway, off-Broadway and in regional theatres throughout the United States. He was a founding member of the Arkansas Repertory Theatre, and has appeared in several network television programs, commercials and feature films. For six years, he was the creator and director of the theatre program at the University of New Haven in Connecticut and served four of those years as the New England Playwriting Chair for the Kennedy Center American College Theatre Festival. He has a BFA in theatre from The New School, and an MFA in theatre from Sarah Lawrence College. Robert is currently the co-artistic director, along with James Valcq, of Third Avenue Playhouse in Sturgeon Bay.