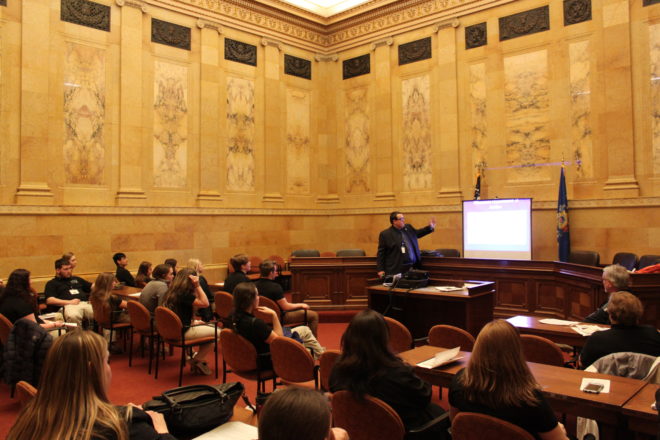 More than 30 student delegates from high schools in Door and Kewaunee Counties went to Madison for Legislative Days on April 5. The group met with legislators and learned about the legislative process under the lights of the capitol building.

In the morning on April 5, Spencer Gustafson welcomed them. Gustafson is a 2013 Sturgeon Bay High School graduate who now works with the Division of Criminal Investigation at the Wisconsin Department of Justice. He brought in two special agents with the division, Jim Holmes and Dorinda Freymiller. 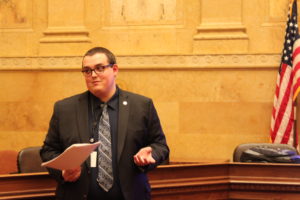 The Division of Criminal Investigation (DCI) also handles cases with public officials. If a public employee is found to have committed a crime pertaining to their elected office, the governing body will typically tap the DCI to handle the investigation to avoid conflicts of interest. While Freymiller was quick to dispel the thought that a majority of public officials are corrupt, it was still a concept that was selected for the students just before they went to meet with legislators from around the state.

“Because public employees serve the citizens of the state, and because every one of you who contributes to the state taxpayer system, we have an obligation, I think, that we need to do our very best to serve you,” said Freymiller. “As a public employee, if I break the law in relation to my job, that affects every one of you. You put your trust in public officials.”

Public officials are governed by a different set of rules than private citizens and businesses. Freymiller said that most of the cases she deals with have to do with embezzlement and typically deal with very high dollar amounts.

At the same time, many local agencies are required by law to outsource their investigation if there is a conflict of interest. If a Door County Sheriff is under investigation, the Sheriff’s Department cannot be in charge of the investigation. This checks and balance system strives to outlaw corruption.

“You should know there are people that are watchdogs to make sure that your tax dollars and your interests are represented and safe because we want to make sure our public officials are doing the best job they can,” said Freymiller.

Gustafson candidly expressed his disbelief that, as a 22-year-old with a two-year degree, he was hired into the Wisconsin Department of Justice. But as the student delegates began asking questions about how these public employees got their jobs, perhaps Gustafson won’t be the last.