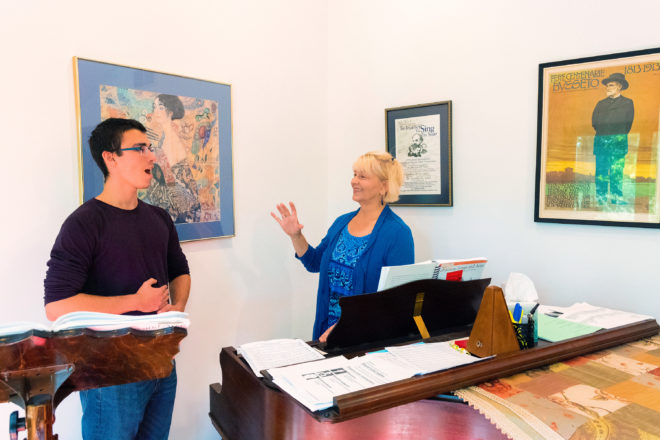 As a four-year-old growing up on a farm in northeastern Iowa, Sarah Meredith liked to stage musical shows for her family. Even if she’d had a grasp of world geography at that age, it would not have occurred to her that one day she’d be performing to great acclaim across the U.S. and from Europe to South America.

She began piano lessons at age six and loved singing in the choir at the Congregational Church, but she majored in political science at Iowa State, graduating in 1974 with a liberal arts degree. She stayed on there for another 18 months to earn a second bachelor’s degree in music education then received a scholarship to complete a master’s at Northwestern. Next came two years, 1978-80, at the Hochschule für Musik in Hamburg, Germany, one of the country’s largest music academies. And, finally, Sarah earned a doctorate at the University of Illinois.

For the past 30 years, she’s been on the music faculty at UW-Green Bay, teaching Applied Voice, Diction for Singers, Women in the Performing Arts, an Opera/Musical Theater Workshop and an Opera Seminar.

Still, she has time for many activities outside the classroom. Since 1993, she has organized student and faculty groups to perform in Canada, Ukraine, Poland, Rumania, Slovakia, Germany, Czech Republic, Italy and Brazil.

“It’s wonderful,” she said, “ to see the students’ eyes open up about other countries and cultures.”

In the early ‘90s, a Romanian music teacher in Milwaukee connected Meredith with people in Prague and Czech Republic, and she spent a year as a guest professor at a music academy in Slovakia. During this time, she realized that during the earlier Russian occupation, musicians and composers were unable to share their work outside their country. After the “Velvet Revolution” in 1998, a non-violent transition of power in what was then Czechoslovakia, they were permitted to perform wherever they wished, but many had no idea how to begin.

Meredith asked how she could help and in 2003 began an annual voice competition in the U.S. to bring Eastern European music here. During her time in Slovakia, she also became known as a judge for international voice competitions, an activity she continues to enjoy. She was invited to teach at the prestigious Bel Canto Institute in Florence, Italy, organized by the Metropolitan Opera, sang with the University of São Paulo Orchestra in Ribeirão Preto, Brazil, and has served as a judge for the Midwest Regional Metropolitan Opera auditions.

Most recently, in May she was the only American on the international jury at the 22nd Schneider-Trnavský International Vocal Competition in Slovakia – an event that drew 115 singers from 16 countries. Another of the judges was Mariano Horak from Zurich, Switzerland, who will be coming to the CzechSlovak International Voice Competition at the Weidner Center on the UW-Green Bay Campus Oct. 13-15. It is open to the public free of charge.

Meredith’s collaborator in sponsoring the competition is the Sharon Resch Foundation, which has issued a travel award to Lucia Ankoca, a soprano from Prague, and will also provide more than $12,500 in prizes for the competition. It is the only vocal competition promoting Czech/Slovak music in the United States.

After a year as a research scholar at UWGB, Meredith published a collection of songs based on Czech/Slovak vocal repertoire since 1850. The project was supported by a grant from the U.S. Embassy in Bratislava, Slovakia.

“After so much time in Eastern Europe, it feels like my second home,” she said.

Meredith, a mezzo-soprano, performs as a soloist, recitalist and master class teacher. In 2008, she received the Bronze Award from the DelBianco Foundation in Florence, Italy, recognizing her work with singers and music faculties throughout the world.

“We love working in the yard and the garden,” she said. “It reminds me of the farm where I grew up in Iowa.”