It doesn’t take a scientific study to see that Lake Michigan water levels are finally on the rise, a simple drive through Ephraim will do. 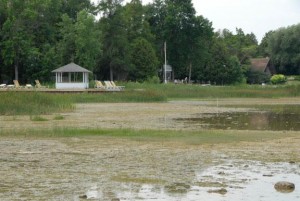 The Ephraim shoreline was extended more than normal for the last several years, as this 2008 photo shows.

Water is at least approaching most docks now, and waves are lapping through the tall reeds and grasses that have taken root near the shore. The lake is up nearly 10 inches over last year; but the verdict is still out on the long-term stability of the lake’s water supply, and it doesn’t appear that a new study will provide a final answer to why Lake Michigan water levels plummeted over the last decade. Even with this year’s rebound, Lake Michigan remains eight inches below its historical average.

The International Joint Commission (IJC), a bi-national board that oversees U.S. and Canadian boundary waters, released a draft report of its study of the 97-mile St. Clair River in May. That report said ongoing erosion resulting from dredging by the Army Corps of Engineers in 1962 is not the primary reason for the plunge in water levels.

The study contradicts an earlier report by Baird and Associates completed in 2005. That study, commissioned by the Georgian Bay Association, a group of Canadian shorefront property owners, said the 1962 dredging exposed the St. Clair riverbed. This, the study said, led to greater erosion and created a “drainhole” effect, sending billions of gallons of Lake Michigan and Lake Huron water into Lake Eerie.

All parties agree that dredging of the river from the late 1800s to 1962 resulted in a 16-inch drop in Lake Michigan and Lake Huron water levels.

But the two-year, $3.6 million IJC study said erosion since 1962 accounts for no more than 4 – 5 inches of the water loss, and blames the rest on climate, particularly a drop in rain and snowfall, and a 1984 ice jam on the St. Clair River that it says sped the outflow of water.

Lake Michigan experienced a 30-year period of abnormally high water levels ending in 1996 (and including record highs in 1986), said John Nevin, the IJC’s communications advisor. Then the Lake Michigan, Huron and Superior basins experienced near-drought conditions from 1998 – 2005, sapping the lakes.

“We’re just not seeing these storm systems the way we used to,” said Nevin, a Rhinelander native. Lakes Michigan, Superior, and Huron all reached or approached record low water levels in 2007, while Lake Erie didn’t see the same dramatic drop, which prompted questions about the St. Clair River dredging. 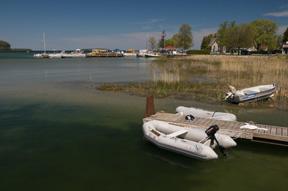 Lake Michigan water levels are up 10 inches in 2009, bringing the Ephraim shoreline back in.

The report came under criticism because it was released before it was peer-reviewed, and the authors did not release the scientific data that it says backs its conclusions. Suspicions were also raised when the committee did not schedule any of its 14 public hearings on the study for any communities along Wisconsin’s Lake Michigan shoreline. It also has not released a new study by Baird that is reportedly critical of its conclusions and methodology.

“At this point, the big question that comes to mind is why there is such a difference between the Baird study and the IJC report,” said Jodi Habush-Sinykin, who acts as council to Midwest Environmental Advocates.

Nevin said he’s confident in the findings of his organization’s study.

“We have 100 scientists who worked on this,” he said. “That’s why we’re comfortable with our findings. Baird says the change is much bigger, and we’re still working with them on their report. They took a different approach, and one we strongly disagree with. They made too many assumptions we weren’t willing to make. The Baird report is an outlier. They are credible and good scientists, but we believe our findings are a consensus view.”

Nevin said Baird made assumptions about the makeup of the St. Clair Riverbed in the 1960s and ‘70s that the IJC would not. Officials from Baird did not respond to several requests for comment.

Reporting by Dan Egan of the Milwaukee Journal Sentinel pressured the commission into extending the public comment period on the study until at least 30 days after it finally releases all of the scientific data used for the report. The committee has also reconsidered its hearing schedule, and has now slated one for Door County in July.

“To not even explore the need for remedial measures, regardless of whether its due to dredging or not, doesn’t seem to make sense,” she said. “New Berlin is talking about taking 2.3 million gallons and it’s a big controversy. Here, we’re talking about billions of gallons and they’re saying nothing should be done.”

Nevin said the study wasn’t asked to determine what to do about pre-1962 dredging.

“If we tried to fix that, and bring the lake back up 16 inches, people would lose their beaches and it could affect hundreds of homes and roads,” he said.

Nevin said there are ways to slow the St. Clair River outflow. He ruled out a dam, but said an inflatable bladder could be used to fill in dredged areas, or they could create a sort of underwater speed bump, but no solutions are consequence-free.

“These all have ecological consequences,” Nevin said. “What would it do to Lake Erie? In the end, there wasn’t compelling evidence to say, do something.”

After a century’s worth of tinkering with the Great Lakes, including reversing the flow of the Chicago River, constructing the St. Lawrence Seaway, and dredging the St. Clair River, man has brought the lakes far from its natural state. Nevin said it may be time to stop.

“We can’t make a precipitous decision based on a couple of years of low water levels,” he said.

To read and comment on the International Joint Commission’s St. Clair River Study, visit http://www.iugls.org/en/home_accueil.htm. The site also includes summaries of each of the reports that contributed to the larger study. The study committee continues to release scientific data for review, posting information on the Web site.