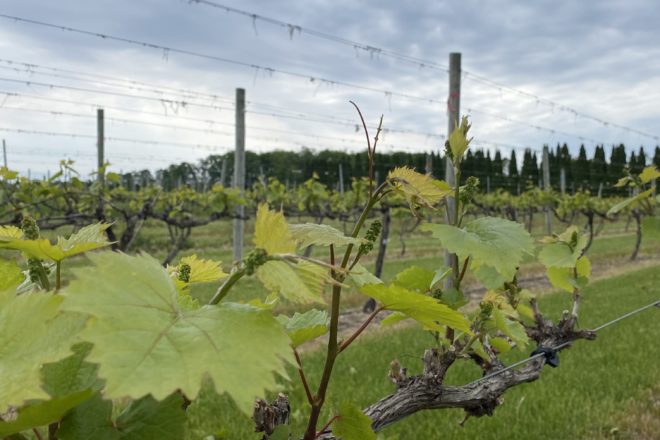 This grapevine is 10 years old, but a few rough winters have stunted its growth. Because grapes want to grow in every direction – “They’re a weed, basically,” said station superintendent Becky Wiepz – PARS staff members must constantly tie and prune the vines to keep them growing as efficiently as possible.

A look behind the scenes at the Peninsular Agricultural Research Station

There’s such a large gathering of greenhouses on Highway 42 north of Sturgeon Bay that the nearby buildings and sign reading “Peninsular Agricultural Research Station” are easy to miss by comparison. But the buildings, as much as the glass, play an important role in learning, educating and disseminating information about agriculture in the state.

Wisconsin has 12 Agricultural Research Stations (ARS) – each with its own specialty – that support and foster the work of scientists and growers locally and statewide.

Besides hazelnuts, corn and some other crops, the Peninsular Agricultural Research Station (PARS) concentrates on fruit: apples, grapes and cherries, specifically. But it does dip, in a crucial way, into the specialty of the ARS in Hancock, Wisconsin: potatoes.

PARS is home to the USDA Potato Genebank: the world’s largest collection of potato-species seeds. Those at PARS gather seeds in case of a disease or invasive species that threatens or harms the potato industry.

“In the event of a potato apocalypse,” said station superintendent Becky Wiepz, “they might have a potato that’s resistant to whatever’s killing the rest of the potatoes, and they can use that to breed into the ones we use commercially.”

Not Your Family Apple Orchard
The station’s main focus, though, is fruit – especially varieties that can survive in the cold. Besides its research on potatoes, apples are the station’s biggest focus, but if you’re picturing the kind of orchard trees that are the backdrop of many family photos taken in Door County, think again.

The PARS trees are planted close together and grow tall, not wide. Not yet filled out, but starting to blossom, they look much younger than they actually are. But they’re much more efficient that way, Wiepz said.

When they’re close together, the apple trees produce a lot more per acre. Then the PARS staff members thin them – a technique in which they remove buds so that the ones left produce better fruit, even though it makes for a less picturesque orchard.

“From what I have seen commercially, I think that 50-plus percent of why people go to pick-your-own orchards is for the nostalgia and the photos,” Wiepz said. “I don’t want to stand in front of this and take pictures with my friends.”

But most commercial producers also use thinning and dense planting, as well as a growing method called grafting.
In grafting, two plants are split from where they grow – the trunks, in the case of apple trees – and then taped or glued together so that they grow as one plant.

This can be done with any two plants in the same genus, but, Wiepz said, some are more difficult than others. A potato-tomato could work pretty easily, for example, but a pumpkin-cucumber would be nearly impossible because their stems are so soft.

Training Grapes
Because of the cold weather, the grapes growing at PARS are specifically designed to survive the winter, and they’re also pruned carefully to ensure that the strongest branches survive. Grapes grow only on new growth, Wiepz said, and they produce too much.

“Grapes grow like crazy, and it’s very difficult to keep them contained,” she said. “If you love grapes, you should plant grapes, and then you can spend all day, every day trying to get them to grow the way you want them.”

PARS staff members spend a lot of time pruning shoots and tying them to wires to help them grow in the direction they should and make them manageable.

Conscious Care for Cherries
Grapes are pollinated by wind, similar to corn, but for the other crops on the 120-acre property, there’s a pollination field filled with insects such as spittlebugs, as well as the monarch butterflies the station raised last year. The staff also raises about 10 colonies of bees on the property.

For water needs, an irrigation line runs beneath the grape vines, and, in fact, the entire property is irrigated, except for the cherry trees, which don’t need irrigation once they’re planted.

The cherries on the property are closely monitored to serve another of the research station’s purposes: reporting on invasive species. The spotted wing drosophila is especially worrisome for cherry growers because “it is a devastating pest on cherries,” Wiepz said.

PARS staff members give weekly reports on pests and diseases, as well as recommendations about how to deal with them. They also give tours to growers and host sustainability field days for the public.

“They’re not very popular now because they tend to die due to cold and disease,” Wiepz said. “Only four trees, so we’ll see how it goes.”

Besides the growing and preserving, educating runs through all of the work at PARS. While staff members work with scientists and growers, they also teach, learn and experiment so – as with high-risk plums – the agricultural community doesn’t have to.