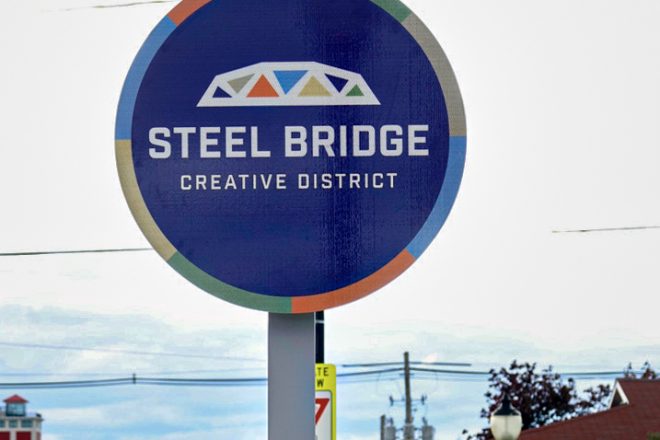 Sturgeon Bay’s extensive new signing helps to unify the town, and more importantly, direct people to its many offerings. Photo by Tom Groenfeldt.

The Sturgeon Bay art scene has changed – especially on the east end of 3rd Avenue. That’s where Seth Taylor bought the Stroh Block building sight unseen while he was in South Korea, where he had been living and running a school for 13-plus years with his wife, Christine Hong.

When they decided to move to the U.S., they looked at several towns before deciding on Sturgeon Bay. The city attracted him because of the arts, tourism and support of an arts industry that allowed year-round jobs through which people actually made things.

He soon met Stephanie Trenchard and Jeremy Popelka. They run the well-known glass works and art gallery on 2nd Avenue, around the block from his 45 S. 3rd Ave. building. That led to the founding of the SŌMI Gallery with Karen Hertz-Sumnicht, a painter who also owns Avenue Art & Co. in Appleton. Hertz-Sumnicht liked the location so much that she took the other side of the building for an extension of her Appleton business.

In addition to the main gallery showing work by the three partners, SŌMI has a Third Room where it will hold temporary shows of works by other artists – currently the three women of the west side’s Yellow Room – Claire Kat Erickson, Meg Lionel Murphy and Jen Hough. The location attracted two other artists – Melissa Resch and Mac Schueppert – who also took studio space there. Taylor and his wife both have studios on the second floor, next to the apartment where they live with their daughter, Mina.

Taylor does ink painting with India ink, as well as watercolor and pen-and-ink portraiture, and his wife does traditional Korean painting.

Across the street is Two Bridges Gallery, with cold-wax paintings by Julia Redwine and prints by Dale Vanden Houten. Farther down 3rd Avenue toward Oregon Street is The Pearl of Door County, which displays paintings by several artists, including Ernest Beutel and Andrea Naylor.

Indeed, the activity on 3rd Avenue is an extension of the Steel Bridge Creative Arts District, which was originally centered on 1st and 2nd Avenues, although Trenchard presciently thinks it may expand to encompass more artists.

It includes the Holiday Music Motel on 1st Avenue and Michigan, which had long been an active participant in the city’s creative life. Several artists have studios in the adjacent Tambourine, which also has a small musical performance space. The result encourages collaboration between artists and musicians.

Joe Kaftan – who uses shards of colored glass to make landscapes, images of animals and, most recently, people’s portraits – worked with a musician who asked him to create an artwork related to “River,” a song by Joni Mitchell.

“I made a portrait based on that, a woman, and I called it “Mosaic Blue.” Then three musicians wrote a new song inspired by the mosaic,” Kaftan said. “So that was fascinating.”

Grier has also participated in the art and music collaborations at the Holiday Motel, writing songs for art by both Murphy and Erickson.

Beyond the Steel Bridge Creative Arts District are other new galleries as well. Over on Jefferson, the Mona Lucy gallery shows abstract work by Monica Ramirez, while Pat Olson, Kerry Vavra and Stephanie Lord will be showing work at DrömHus, 611 Jefferson St as part of the Sturgeon Bay Art Crawl.

Across the bridge, in addition to The Yellow Room, ARTicipation shows photography by Mike Caplan, abstract photography by Laura Caplan, paintings by Claudia Scimeca and watercolors by Steve R. Krueger.

It’s been two years since the last Sturgeon Bay Art Crawl thanks to COVID-19, but first-time and longtime art crawlers will be treated to a new experience when the event (sturgeonbayartcrawl.com) returns Nov. 19-21. With an abundance of new galleries and a more unified look and feel to the area, there will be no shortage of things to see.

More than 25 artists will invite patrons into their galleries and home studios to view and purchase art. A kick-off party will start the fun on Nov. 19, 5-7 pm, at the side-by-side locations of SŌMI Gallery, 45 S. 3rd Ave., and Avenue Art on 3rd, 39 S. 3rd Ave.

Guests are advised to have a mask because some studios – especially the smaller home studios – may require masking. They may also limit the number of people allowed in at one time.