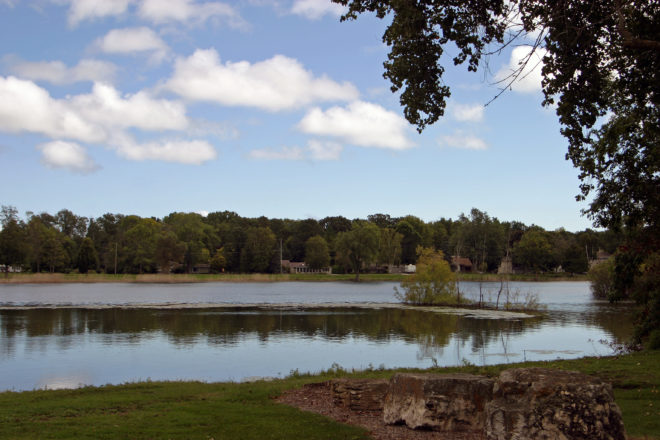 At a meeting of the Committee of the Whole on Oct. 9, the Sturgeon Bay Common Council voted 5-2 to include $3.5 million in the budget to dredge Little Lake with the hope that grants will replace a good portion of taxpayer money.

“Hope is not a good financial plan,” said Alderman David Ward, who, along with Alderman Ron Vandertie, voted against budgeting the money for the dredging project.

“I just don’t feel like I understand what the costs are,” Ward told the committee, adding that uncertainties in the project lead to the probability of cost creep.

“This is a lot of money,” Ward said. “I can think of other places I’d put this money.”

“I need to see some other improvements done,” Vandertie agreed, suggesting the city first take care of its beaten up roadways and then consider fixing Little Lake.

These comments came after Staci Goetz, project manager with Foth Infrastructure & Environment in Green Bay, presented an initial plan for the dredging project.

She said due to the nature of debris and sediment at the bottom of Little Lake, it was decided that if the project were to go forward, they would use a mechanical excavator rather than a hydraulic dredge.

A canal would be created so dredged material could be transported by water-tight barge and taken to a confined disposal facility owned by Sturgeon Bay Utilities. She said the estimated $400,000 disposal fee would be waived by the utility.

Some of that sediment will be high in nutrients, so could be marketed for sale or trade.

One of the unknowns of the project is that below the layer of debris and native sand there is 50,000 cubic yards of either native glacial till or bedrock. Goetz’s colleague, Brian Hinrichs, said if it turns out to be bedrock, they have access to an excavating tool that has already proven it can chew through bedrock in a project at Detroit Harbor on Washington Island.

They are targeting a 12- to 15-foot depth for the lake, because, Goetz explained, fish need a minimum of 12 feet to overwinter.

Mayor Thad Birmingham appeared to be the biggest advocate for investing the money and effort into changing the “stinky mess chuck full of weeds” into the spring-fed jewel that the lake once was when it was first known as Crystal Lake – before neglect set in. He suggested the dredging would unplug the springs that once fed the lake and help return it to clarity.

Birmingham also blamed the city – administrations past and present – for not “doing a very good job of taking care of it.”

“The bottom line is, something needs to be done with it,” he said. “I think the community is behind doing something. It’s time to act. It’s been neglected long enough.”

Municipal Services Director Bob Bordeau explained there is $1.4 million in grants, and possibly more, that can be applied for once the city proves its serious commitment by budgeting for the project. He also pointed out that if the council did approve putting the dredging in the 2018 budget, the council could still reject the project if contractor bids come in higher than anticipated.

“Ultimately, it falls in your hands,” he said, which prompted Vandertie to say, “We pass things so easily because we get a second kick at the can.”

“When it comes time to actually spend the money to write that check, we’re going to know what all those costs are,” Birmingham said.

“I don’t see any way this happens without the city taking the lead,” said Alderman Rick Wiesner.

Alderwoman Kelly Catarozoli wondered if the channel created for dredging would remain in place for launching kayaks after the dredging is completed. The answer to that depends on the Department of Natural Resources, she was told. She also suggested the city “bite the bullet” and include a planned update of adjoining Sunset Park with the dredging costs.

Birmingham suggested the council should take the lead on Little Lake, and then hope that corporate donors and the community step up to help with Sunset Park improvements.

Ward suggested dredging Little Lake was more of a want than a need.

“I just feel like the constituents I’ve talked to feel that’s a low priority,” he said. “That’s just too much money.”

“The last thing I want to see is the taxpayers foot $3.5 million for this restoration. I would like to see them get by for less than $1 million,” Birmingham said. “In my mind, it’s past the want stage. This is something I think a responsible community now will do.”

Alderwoman Laurel Hauser said she has heard support for the project from her constituents, and that it is the job of elected officials to look ahead for the benefit of all residents.

“I think it will benefit the community for a long time,” she said.