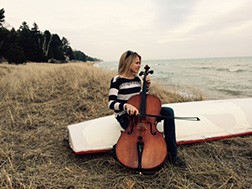 After a successful musical transition from classical to a mix of bluegrass, rock and blues, Sturgeon Bay resident and cellist Kim Souther will release her debut album Missing You on April 11.

The album, originally planned as a demo, is a melting pot of influences that inspired the classically trained Souther to meld the mellow sounds of the cello into a range of genres.

It all began with bluegrass and a little bit of homesickness after the Virginia native and her husband, Shannon Souther, moved to Wisconsin six years ago.

“I love classical music but I wanted to see what else the cello was capable of,” Souther said. “My mom was a bluegrass singer when she was in high school. When we moved here, I moved away from home and I missed [my family] so much. Growing up, she would sing the bluegrass music while she was cleaning and doing other stuff, and I hated it! First I was too cool, I was listening to Milli Vanilli. It was so much better. Then I was classically trained and I thought, ‘Mozart is so much better than bluegrass,’ but you know, then I moved up here and somehow I got ahold of a bluegrass station and started listening to it.”

Naturally it reminded Souther of home. But she faced one conundrum: she was classically trained for an instrument that’s “not really a bluegrass instrument.” She tried out fiddle and her husband bought her a mandolin, but she just couldn’t make the transition.

“I thought, ‘This is fun, but cello is my thing. How can we make cello fit into the bluegrass genre?’” Souther said. “I started looking into it and realized that some other cellists were doing that as well.”

She discovered the string band Crooked Still (she took lessons under the band’s former cellist Rushad Eggleston), best known for its high energy, acoustic style and unusual instrumentation. The band, made up of a vocalist, banjo player, bassist, cellist and fiddler, plays progressive bluegrass, folk, country and Americana.

Souther also became a fan of the Punch Brothers, a band that uses bluegrass instruments (mandolin, fiddle, banjo, guitar and bass) to put a spontaneous spin on modern classical music.

She began experimenting with her own instrument three years ago, bringing kitchen utensils into the mix to create different sounds on the strings. Over time, Souther began incorporating into her music elements of bluegrass, rock, blues and Choro (often referred to as “the New Orleans jazz of Brazil”). During that time, she also had the opportunity to record with a number of talented musicians, prompting two Nashville studios to ask her to put together a demo.

Souther did just that, recording the variety of music she had come to master with her cello. Little did she know that demo would become her soon-to-be-released debut album, Missing You.

“I sent it to some of my teachers to see what they thought and they said, ‘I think you should make an album out of this,’” Souther recalled.

In late December 2014, Souther made her way to Rock Garden Studio in Appleton to work with producer Marc Golde to do just that. She gathered up a handful of musicians with whom she has performed solo shows with locally and in the Fox Valley area, and dedicated every weekend from late December to mid-March recording the 14-track album.

Missing You features Souther on cello, George Sawyn on guitar, Meg Proper on vocal/guitar, Bobby Coverston on vocal/guitar, and TJ Hull on Irish fiddle. A majority of the tracks are instrumental, just three are vocal tracks.

One of the most noteworthy happenings of Souther’s experience recording was that Golde would not let her listen to the album before it was complete. She trusted him and had her first listen of Missing You less than three weeks ago.

“I had asked, ‘If there is something a little bit out of tune, I want you to keep it,’ because I wanted it to sound more live,” Souther said. “I don’t want to try to be the kind of musician that’s trying to cover up every little mistake. I want it to be me. This is how I played it.”

The result? “A whole melting pot of music” that is sure to appeal to the masses.

Souther will celebrate the release of Missing You with a performance at the Frozen Spoon, 210 N. 1st Ave. in Sturgeon Bay, on April 11 from 6 – 8pm. Guests will receive 25 percent off their frozen yogurt purchase. She will also have a Facebook listening party, in which people are invited to “drop the needle” at the same time and have a question-and-answer period with Souther. Missing You will be available for purchase on iTunes and Spotify.