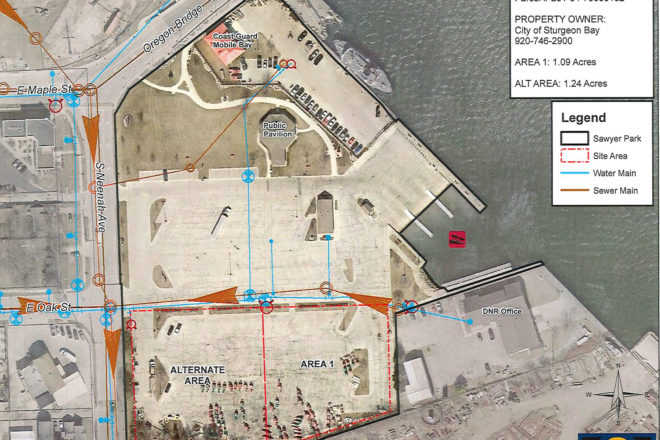 If Sawyer Park boat launch were to be selected as a site for a NERR, only the green space would be used.

Of the sites the City of Sturgeon Bay has identified as potential National Estuarine Research Reserve (NERR) headquarters locations, the 190-stall parking area of the Sawyer Park boat launch will be eliminated following a strong argument made by one alder who swayed the rest.

Sturgeon Bay has been working during the past year on its pitch to become the NERR site.

“One of the things we think we need to do is some of the heavy work and share with the NERR site-selection committee [at the University of Wisconsin-Green Bay] a kind of menu of sites located within the city” that could be used, said Josh VanLieshout, city administrator.

The identified city-owned sites were Sunset Park, the Yacht Club property and Sawyer Park. The city is also querying owners of other sites. These include the privately owned Shipyard Development property near Martin Park and the former vacant Younkers building at 56 N. 4th Ave. that’s owned by the County of Door. The county recently revealed that it did not have a use for the building that it purchased in 2019 for $505,000.

A NERR facility would make improvements to underserved areas of Sunset Park, VanLieshout said, and the land the city owns at the Yacht Club is vacant and undeveloped. The Sawyer Park boat launch site was considered because of its location next to the Department of Natural Resources site.

Alder Gary Nault said during the Common Council’s March 1 meeting that he was “shocked” to see the Sawyer Park boat launch on the menu. Nault took the council all the way back to the 1980s, when the city bought the land and received state and federal grants to turn it into a launching site. The grants were funded by user fees, and to this day, the operation and maintenance of the site is funded by boaters and anglers.

“It’s known as one of the best launching ramps on Lake Michigan,” he said, and it brought in $54,000 in 2021 in launching fees. The fishing tournaments that bring in anglers from around the country and the increase in recreational boating all help to fuel Sturgeon Bay’s economy.

“This is not the time to start cutting space in our very popular ramp,” Nault said. “It’s time to start looking for more [boat launch areas].”

The council voted to amend the Sawyer Park listing so that it remains on the site-selection menu, but only the green-space portion, not any of the parking.

The decision puts the sites on a list of potential locations for a NERR. If Sturgeon Bay were selected, any negotiations for any of the city-owned parcels would return to the council for deliberation.