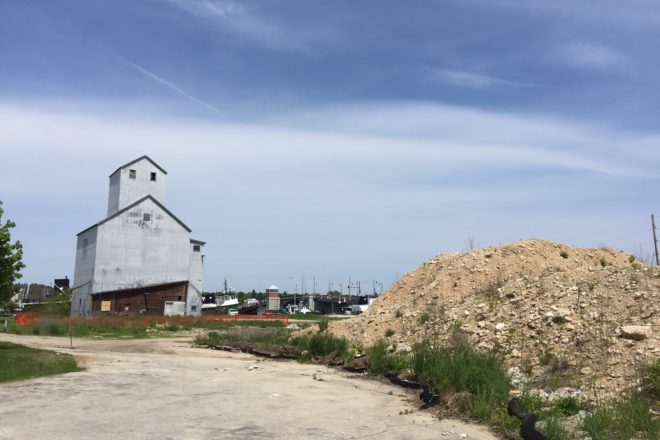 The Sturgeon Bay Common Council has directed its legal council to give developer Bob Papke and Bayland Builders 28 days to remove the dirt piles on the waterfront. Photo by Myles Dannhausen Jr.

The Sturgeon Bay Common Council had three new faces in its first meeting since the April 3 elections and the group quickly set about new policy directions. One of the first was to direct Bob Papke, the former developer of the proposed west side waterfront hotel, or his construction company, Bayland Builders, to remove the dirt mounds before the end of May, although the question of ownership is still unclear.

“It’s clear as mud,” said city administrator Josh VanLieshout of who owns the dirt piles. “Whatever you do I think you just need to buckle up and go along for the ride.”

The council decided to direct legal counsel to send a notice to Papke and Bayland Builders, who are the other two parties that may claim ownership of the dirt piles, and order them to take the eyesore off the city’s property.

“You’re looking at something equivalent of an eviction action to force the removal,” said Amy Sullivan of Pinkert Law Firm, who was standing in for Randy Nesbitt as legal counsel. “If they claim they don’t own it and therefore cannot be required to remove it, then we’ll be having a trial on the ownership of the dirt piles.”

Kelly Avenson, one of the three new common council members, was incredulous as to how ownership could be a mystery.

“This blows my mind that we do not know who those dirt piles belong to,” Avenson said.

City Engineer Chad Shefchik said ownership of the dirt was probably not discussed back when the piles were first placed there.

“We needed that dirt just as the developer did,” Shefchik said, explaining that the Department of Natural Resources (DNR) cleared the dirt for contamination when it was dug out to make a retention pond near CVS on Egg Harbor Road. The city needed proper fill to remediate the contaminated soil on the property, the developer needed the fill to elevate the property, and the contractor who dug the pond saved money on trucking the fill to a faraway site.

“At the time it sure seemed like a good win-win-win,” Shefchik said, adding that was why ownership of the dirt was never made explicit. “Take away the hotel, stop the improvements, now neither party wants it just as much as at one time both parties wanted it.”

Council members asked if they could move the piles to another city property while ownership was determined, but that posed potential liability because the dirt was verified by the DNR as being suitable for fill over contaminated soil. If the city contaminated the dirt piles by moving them, then the person who claims ownership may also claim damages on the devaluation of what is now useless soil.

Should Papke or Bayland Builders not claim ownership of the dirt piles, then the city can either fight that claim in court or deal with the dirt on its own. Avenson’s original motion dictated the city would move the dirt piles before Memorial Day if the other parties did not, but Mayor Thad Birmingham was hesitant to be bound to that action without knowing how much moving the dirt would cost, whether there was another city property suitable to house the dirt, or if moving the dirt could contaminate it.

The final approved motion directed the common council to reconsider the fate of the dirt piles if Papke or Bayland Builders did not act on the 28-day legal notice.

In other Sturgeon Bay news: