The department started providing the service about two years ago after seeing a need in the community. 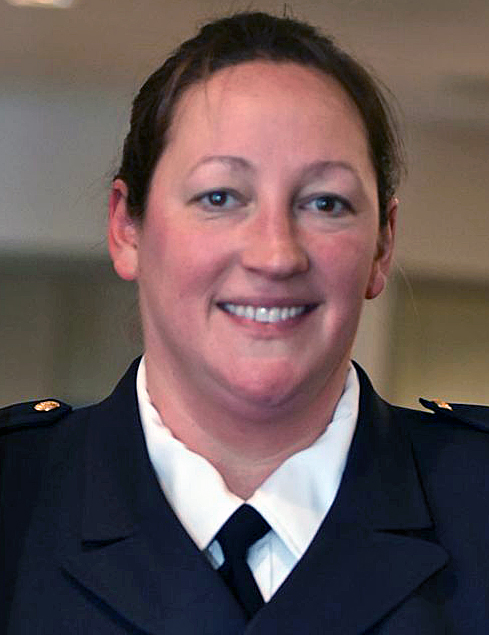 “There really wasn’t a technician in this area,” Assistant Fire Chief Kalin Montevideo explained. “The only technician at the time…was Jenny Austin of the State Patrol, who still currently does it.”

As a State Patrol officer, Austin works throughout the state of Wisconsin, which limits her availability for Door County drivers.

Montevideo and Fire Chief Tim Dietman wanted to make car seat safety and support more readily accessible to members of the Door community. The two participated in a weeklong certification program in Green Bay through Safe Kids Worldwide, a global organization that works to reduce preventable injuries in children. Now, the pair work out of the garage at the SBFD.

To get their car seats inspected and installed, drivers can call the East Side Fire Station. Montevideo and Dietman are dedicated to helping families even if the appointment falls outside their regularly scheduled hours.

“If one of us is here [in the office when someone stops by], we’ll do it right then. Otherwise a lot of people call and just make an appointment. We come in after hours, we come in on weekends, whatever is convenient for the family,” Montevideo said.

Dietman and Montevideo go through a checklist to make sure the car seat is properly installed and up to specifications.

When inspecting, Montevideo said, knowing the history of the car seat is crucial.

“Some people are buying them at garage sales and they don’t really know if it was in a crash. Once a car seat’s in a crash, it’s really no good anymore,” she explained.

Other important elements to check include whether or not the seat has an outstanding recall or if the seat has expired.

“A lot of people don’t know that car seats expire,” said Montevideo. “Typically they have about a six-year life. Some are a little bit longer; some are five years, but they do expire.”

Properly installing the seat once it is checked is equally important. Montevideo and Dietman recommend bringing both the seat’s owner’s manual and the child who will be using the seat to ensure correct installation. Seat placement can vary depending on the type of vehicle, the type of seat, the age of the child and how many car seats are being placed in the vehicle.

“There’s the safest place [for the car seat], but then mom might have two or three kids, and a car seat for each of those kids,” Montevideo elaborated. “So it’s more about what fits in that car and what fits that family’s life.”

Additionally, a concern with being “extra safe” can negatively affect the chair’s performance in crashes.

“Some people think, ‘Well, I’ll install it with the anchor system and then I’ll put the seat belt on too because it’s safer.’ Actually, it’s less safe,” Montevideo said. “When the car seats are tested, they’re tested with different straps and security features, but not with both belt systems being used at the same time.”

“We do some education with seat belts and projectiles in vehicles, checking surroundings when you’re driving and making sure there are no little kids around you,” Montevideo said.

The Assistant Fire Chief estimated that a full inspection and installation, along with educating parents takes between 45 minutes to an hour.

“It takes a little time, but really in the grand scheme of things it’s not that long,” she said.

The community has responded positively to the program, though need and interest varies throughout the year.

“It kind of goes in spurts,” Montevideo said of the service’s popularity. “The hospital does a child care class for new moms, and they give them our information…We’ll notice after one of those classes we get quite a few calls.”

Grandparents have also expressed interest in making sure they have car seats that are safe and ready for visiting family members.

In addition to their upon-request inspections, Dietman and Montevideo have completed clinics at Jim Olson Motors. They hope to reach out to other organizations such as daycares and preschools that could benefit from the pair’s knowledge.

Proposed legislature regarding the use of child safety restraint systems has been under consideration in Madison. Montevideo mentioned Assembly Bill 400, which would require children to be in rear-facing car seats until the age of two. The current law sets the restriction at one year old. While the bill passed the state assembly, it did not pass the senate.

“[Dietman and I] would like them [children] to stay at least two years – or as long as possible – rear-facing,” she said. “It’s just safer. The law says you don’t have to wear a helmet, either, but we know it’s probably safer to wear a helmet on a motorcycle. I try to really push the safety aspect even though it’s not the law.”