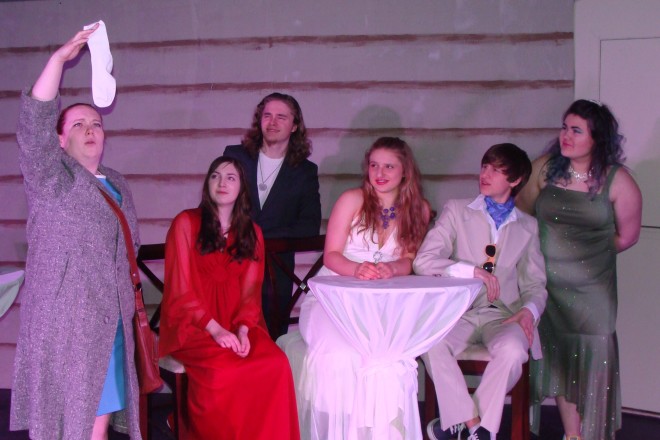 Cast members act out a scene from “Murder at the Prom.” Submitted.

What can you expect from an audience participation murder mystery? Before the show get a chance to mingle and enjoy the music. Then prom begins, and glory days soon turn into gory days as one among the audience is murdered, then another. It’s then the audience’s job to figure out who among the cast is the murderer. Prizes will be awarded.

The cast includes John Henry Amelinckx as Vinnie, Maddie Schopf as Bella, Izzy Vreeke as Patty, Kekoa Bicoy as Chucky, and Moriah Grahl as Muffy. They are joined by their principal Ms. Cranston, played by Keri Grimsley.

The show is full of suspense and humor, but also contains adult language and content. Performances will be held at Rogue Theater, 340 Jaycee Ct., Sturgeon Bay, at the following dates/times: April 16 at 7:30 pm and April 17 at 2 pm. Tickets are $15 adults and $7 students. For more information, call 920.818.0816 or find Rogue Theater on Facebook.