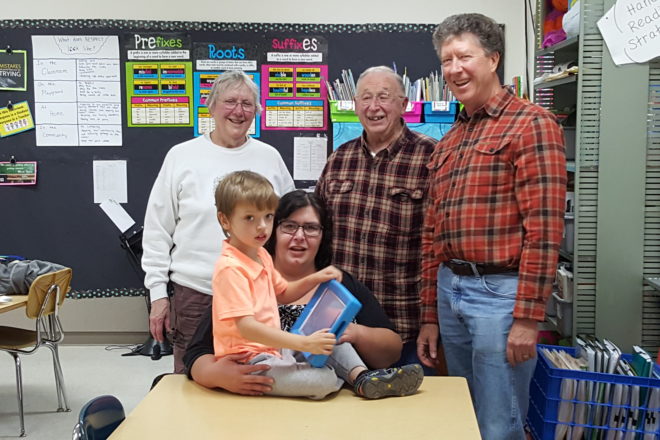 Zachery Hurst, a four-year-old in Southern Door School’s 4K kindergarten program, received an iPad from the Sturgeon Bay Kiwanis Club as part of their iPad for Autism program. Zachery is pictured with his mother Debbie, and with Kiwanis members Marilyn DeVaney, Pete DeVaney and Mike Wagner. Submitted.

Members of the Sturgeon Bay Kiwanis Club awarded an iPad for Autism to Zachery Hurst, a four-year-old in Southern Door School’s 4K kindergarten program. Hurst’s autism diagnosis started when his parents, John and Debbie Hurst, noticed some unusual tendencies in Zachery when he was about 18 months old. Zachery’s pediatrician was able to diagnose Autism Spectrum Disorder. With a referral from the pediatrician, Zachery was able to get into an early intervention “birth to age 3” program. At age 3, he was able to transition to a special 3K at Southern Door Schools. Currently Zachery is in the inclusive 4K class, and is also working with the school’s speech therapist and an occupational therapist. His mother credits the early intervention and help from Southern Door Schools for the terrific progress that Zachery has made. Debbie feels that the sooner the diagnosis and intervention, the better the results. Kiwanis hopes that its iPad donation along with special software for autism, will help with Zachery’s continued progress. This is the 17th iPad awarded by the local club. For more information visit kiwanisautismproject.com.