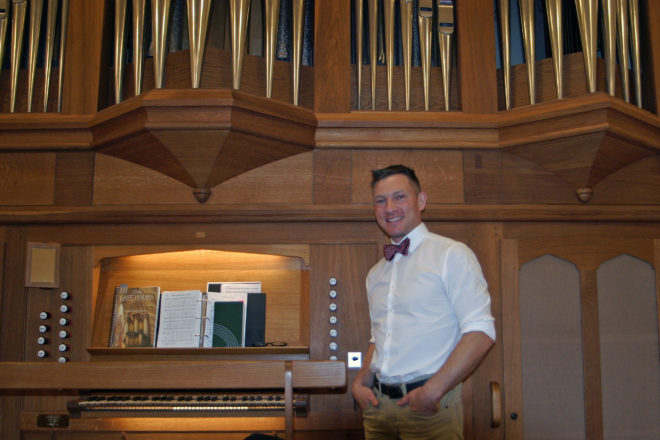 Ryan Albashian was in middle school in 1992 when he and his organ teacher traveled from the Oshkosh area to Sturgeon Bay Moravian Church (SBMC) to hear a concert by acclaimed organist Martin Jean on the church’s brand-new Jaeckel pipe organ.

Albashian went on to earn a degree in organ performance from Lawrence University in Appleton before heading to Virginia for a formal apprenticeship in organ building. And in 2007, Albashian was part of a team that built an organ for Yale University, and Martin Jean, who today is a professor and director of the Institute of Sacred Music at Yale University, was the adviser for the project.

“The same man I had met when I was in 7th grade was the adviser and now he and I are best friends,” Albashian said.

He explained that his specialty in working on pipe organs – specifically because he is an organ builder who also plays the organ – is as a “voicer.”

“My specialty as an organ builder was taking these new organ pipes that we had made specifically for this Yale instrument and making the organ sound as if it is 350 years old, using various tricks,” he said.

Admitting that the organ world is a small one, word of Albashian’s expertise as a voicer spread and in 2010 he was offered two jobs in Europe, one in Germany and one in Austria.

“I accepted the one in Germany,” he said. “I became the only American organ builder to be given licensing permission to work there as an organ builder, largely because of the experience working with the Yale instrument.” 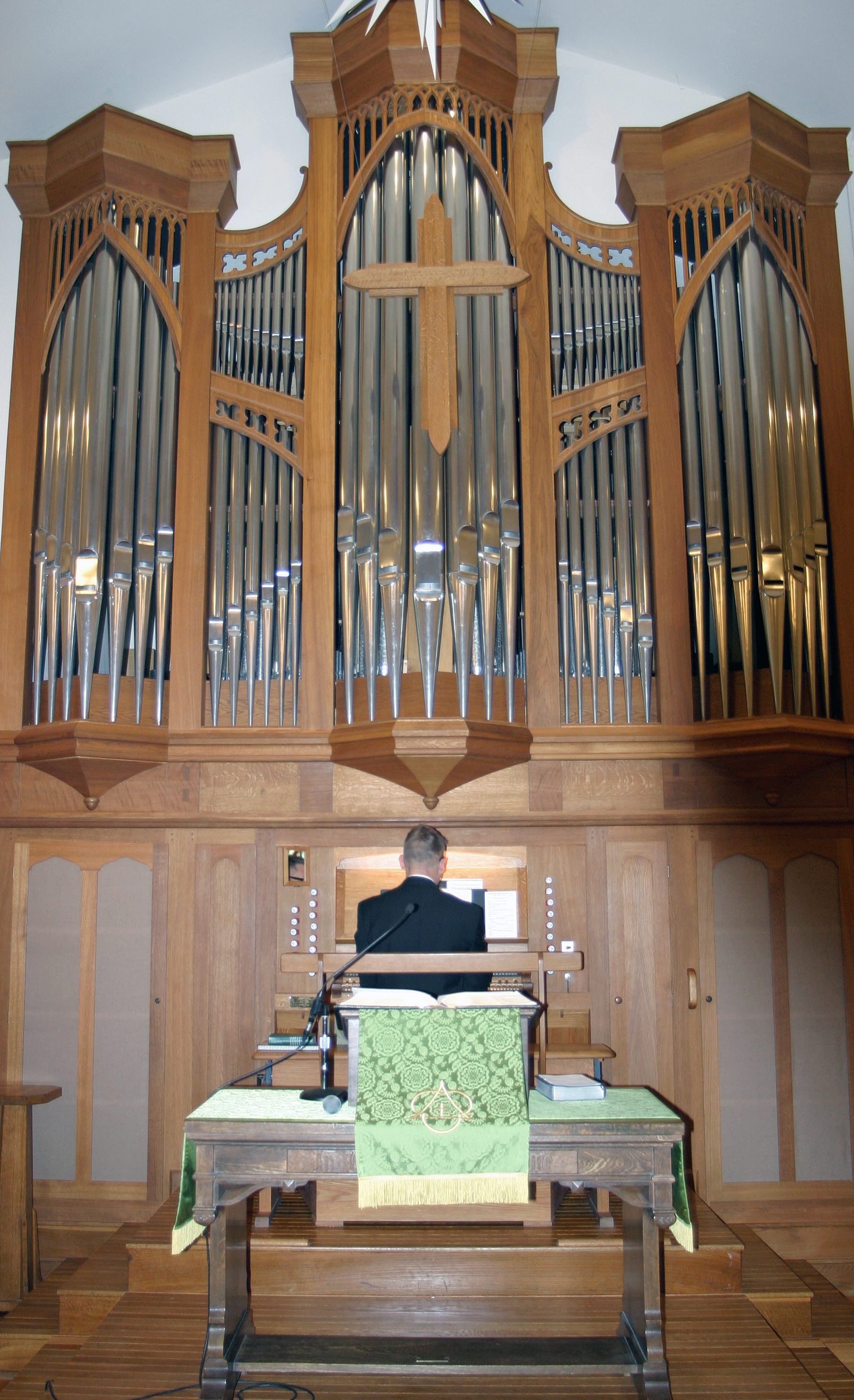 Albashian remained in Europe working on pipe organs until 2015 when his other passion was calling.

“I’m also a big aviation enthusiast. I was active doing that beginning in high school. I really missed aviation,” he said. “I had plenty of work over there. In fact, I still have work opportunities in Europe if I want them. But I really missed the adrenaline rush. I’m also an active skydiver. There’s a massive difference between that or spending weeks on end in a just-above freezing cathedral working on an organ. While that has its own rewards, there was just something about aviation that I really missed.”

Rev. Matthew Knapp had just started his tenure at Sturgeon Bay Moravian Church 26 years ago when the team from Jaeckel Organs of Duluth, Minn., began installation of the pipe organ.

“They were putting that organ in when I got here. I literally helped carry it in,” Knapp said. “The organ was a gift from a single family, Hans and Laurie Nowack. They were going to give that anonymously, so no one in the church would know. That was a big process. That changed the whole sanctuary. There used to be choir loft in that space. That was a big transition for this church, but, of course, there’s always been this huge passion, and it’s deep in what it is to be a Moravian, going all the way back. But within this church as well, music has always been so important. Laurie got sick and died before it was completed, so they gave it as a gift in her name. We had this incredible blessing come to us.”

For the first two decades of the organ’s life, Robert Nickel served as music director and organist, who recalled that installation took place from December 1991 through January 1992.

“Three stops were available in December 1991, so the organ was used for the first time at Christmas Eve services in 1991,” Nickel said.

He also recalls playing the organ for donor Hans Nowack.

“Although Hans’ health was failing, the organ was installed in time in order for Hans to hear it,” Nickel said. “I remember him meeting me in the aisle after one of the first times the organ was used. He had tears in his eyes and asked, ‘Do you like the organ?’ I immediately choked up and responded, ‘I love it. Thank you.’ I will always remember that moment.”

“Not only is the instrument a joy to play, but I also learned from it as well,” he said. “The instrument is constructed along historical principles, most specifically featuring mechanical action. This type of action boasts extreme longevity, and all parts are replaceable. There is no concern about obsolescence. When Dan and members of his firm were onsite for the installation, they preferred to be housed by members of the congregation as opposed to in hotels. In this way, they got to know the congregation better.”

Nickel said during his 23 years as music director at the church, many people commented on the “vigorous communal singing.”

“I remember one person telling me after his first visit to morning worship that he was so taken by the wash of sound from the organ and singing of the first hymn, all he could do was stand there and cry,” Nickel said. “I believe the Jaeckel organ is an effective instrument for worship and recital. Having dedicated 23 years of my life to SBMC, that instrument will always hold a special place in my heart and in my career as a church musician. It was my privilege to play it for the first 23 years of its life.”

“We had been blessed the first 20 years that the organ has been here with Robert Nickel,” Knapp said. “We had some folks filling in. This is a huge issue for a church like this church, where the instrument is a central part of our worship life. It’s very difficult to find organists. Ryan came up to fill in in January two years ago. Immediately we hit it off and he knew the instrument. And this congregation loves to sing. Right off the bat he made that connection, so he’s been our organist since then.”

“I really enjoy the church and the people, and how they sing, their respect for music, which is something that isn’t found everywhere. The people genuinely enjoy singing,” Albashian said. “Oftentimes you come across churches doing more contemporary praise band sort of worship, and some churches say, no, we want this kind of worship. I think if that’s done right, it serves even as a further inspiration and a testament to how successful this ‘historic’ musical style works today. Then you realize this isn’t just historic music. It’s something that works in our day and time, and is just as contemporary now as it was 350 years ago.”

“This congregation is very interesting because they continue to be a liturgical Moravian church,” Knapp said. “In many ways we are very traditional in terms of our music. It’s such an important part of our spiritual rootedness. There’s something about that in this culture and time that is so unique. There are very few places where a group of people will sit down together in a room and actively participate together. Theologically and spiritually, that’s what God calls us to do. So we are living out the gospel and how we work at bringing our voices and hearts together. It’s just a very important part of being a Moravian.”

“This is the only church that I have ever played the organ for where there are literally verses where appropriate on hymns, I can stop playing and they sing the verse a capella and in four parts,” Albashian said. “I have never played for a church with such a strong musical background that is able to do that. That is very, very unique.”

To celebrate the 25th anniversary of the Jaeckel organ’s place at the Sturgeon Bay Moravian Church, the community is invited to celebrate this unique instrument with an old fashioned Hymn Sing where those gathered can choose their favorite hymns, with Albashian at the organ. The event will be held from 4 to 5:30 pm on Sunday, Oct. 29. Dinner and a bake sale will follow.

“Every single Sunday is a gift to have this instrument and someone who can play it,” Knapp said. “We’re both very passionate about this. That instrument was made for worship, it was made to sing with, so it made perfect sense to have a hymn sing.”

Organ Builder Happy for His Opus 19

Organ builder Dan Jaeckel is happy that his Opus 19 – the Jaeckel Pipe Organ built and installed at Sturgeon Bay Ephraim Moravian Church 25 years ago – is in a place where it is appreciated.

“It’s one of the nicest things about that organ, they really appreciate it,” Jaeckel said. “Each one is sort of like a child. You give it life and then send it out into the world. Is it hard to let it go? Not really, if it’s doing what we want it to and it’s appreciated. The best part is hearing it played by a really good organist, who uses all of it and understands the differences in sound. That’s really exciting for me.”

Jaeckel, headquartered in Duluth, Minn., is up to Opus 55 now, which is an organ he built for Duquesne University’s Chapel of the Holy Spirit for its prestigious sacred music program.

Jaeckel said each organ and installation is a learning experience. Opus 19 was his first organ for a Moravian church. He said the consultant on the project, Miriam Clapp Duncan, professor emeritus at Lawrence University in Appleton, Wis., was a “tracker backer,” an advocate of the mechanical action organ that uses thin strips of wood called “trackers” from the keys to the organ valves.

Because of that, she recommended Jaeckel for the organ project, which led him to an investigation of Moravian music.

“That was the exciting part for me,” he said. “The Moravian background and how much church music they had was a big influence on me. They often would use a lot of brass in their church services, and this organ will do a lot of things the brass will do.”

Jaeckel doesn’t recall exactly, but believes the building process was 10 months to a year. It included building the organ at his Duluth studio, disassembling it and reassembling at the church.

“I was a little concerned that it didn’t have a wooden cabinet all the way around it. That’s the way we always build,” Jaeckel said. “But we built it into the space and the acoustics of the building worked. I was happy with the results.”

He also recalls that he and his crew enjoyed the installation process and staying with congregation members during that time.

“It was good to work there and to have people play it and understand the instrument,” he said.