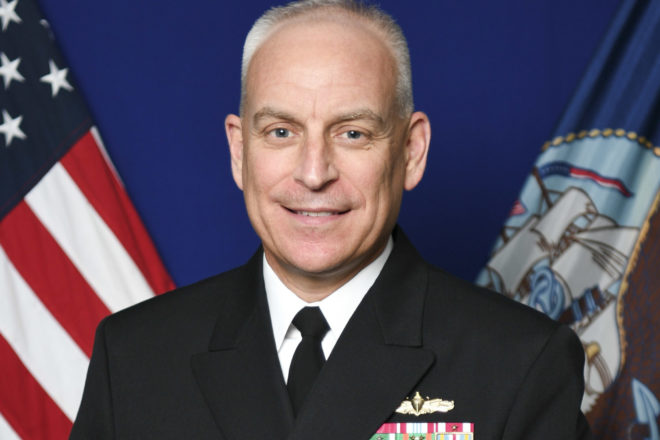 Rear Adm. Paul Schlise, a native of Sturgeon Bay, has been promoted to Rear Adm. (upper half), receiving his second star from Adm. Mike Gilday, chief of naval operations.

Admiral is the highest rank in the Navy and holds four stars.

Schlise joined the Navy in 1989 after receiving his commission through the Naval Reserve Officer Training Corps (NROTC) program at Marquette University.

“I initially joined the Navy based on the education opportunity afforded via the ROTC scholarship program,” Schlise said. “I had no idea it would lead to a lifelong career, but here we are, 33 years and counting.”

Schlise graduated from Sturgeon Bay High School in 1985. He credited time spent sailing and fishing on the waters around Door County for providing him with an appreciation for the challenges and sometimes unforgiving nature of sea duty. He also noted his time working in his father’s plumbing business and the leadership opportunities afforded through high school academics, athletics and student government as part of the formula for success in the military.

“Packerland is founded on Midwestern values: hard work, honesty, trustworthiness and being a good shipmate – attributes that’ll take you a long way in the Navy,” Schlise said.

His duties at the Pentagon entail developing warfighting requirements and serving as resource sponsor for the Navy’s surface forces. He oversees a $131 billion budget across the Future Years Defense Program, which covers everything from purchasing new ships and missiles to the monthly salaries of surface sailors.

Although Schlise is currently serving at the Pentagon for the fourth time, his true love, he said, is sea duty. He counts himself fortunate to have had command-at-sea of the destroyer USS Halsey (DDG 97), Destroyer Squadron Seven and Carrier Strike Group 10.

Schlise’s career has taken him to six continents and more than 30 counties, and he’s completed nine overseas deployments and served in shore-based, overseas positions in Singapore and Bahrain.

Today, more than 90% of global trade travels by sea, and 95% of the world’s international phone and internet traffic is carried through fiber-optic cables lying on the ocean floor. These realities emphasize the Navy’s critical function in protecting America’s security abroad, preventing future conflict and ensuring that the world’s oceans remain free and open.

Reflecting on his service, Schlise said he hopes other sons and daughters of Door County will consider the Navy or another service.

amazing, but the people, the teamwork, the chance to serve your country and the opportunity to be a part of something bigger than yourself are the best part,” he said. “There’s been challenges, but the hard’s what makes it great. I can’t imagine a more rewarding career.”

To learn about joining the Navy, visit navy.com or call 800-USA-NAVY to speak to a recruiter.