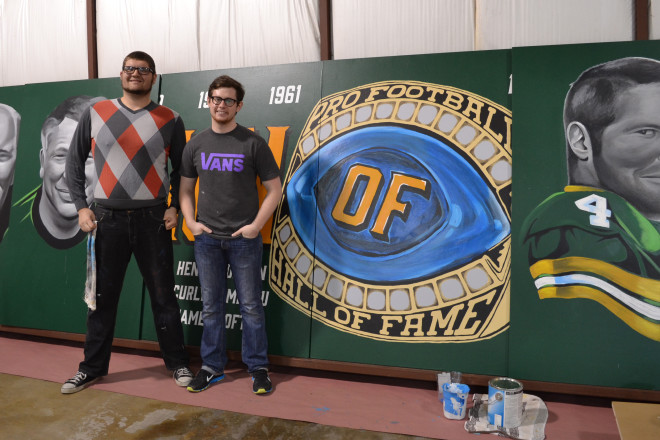 Sturgeon Bay native Zane Statz knows how important exposure is in the art world. So when the opportunity arose for him to put his artistic mark on a neighborhood fence passed by 78,000 people on select Sundays in Green Bay, he jumped at the chance.

His task? Design and paint a Green Bay Packers-themed mural on a 70-foot-long picket fence located a block off the stadium’s main drag, Lombardi Avenue. The fence would remain up for the entirety of the 2015-16 season and though privately owned, would face the street, helping usher in tens of thousands of local and visiting fans to Lambeau Field.

“[The fence owner] found my college website after the artist he lined up backed out last-minute,” Statz recalled, “two weeks before he needed to have it done. He got a hold of me and asked if I would be willing to do it.”

Due to the size of the project, Statz (owner of ZAS Designs) told the fence owner he would need a second pair of hands and turned to his friend, fellow St. Norbert’s College graduate and graphic artist Spencer Young, owner of Forever Young Designs in Black Creek.

“I do murals for a living so it was perfect that he called me,” Young said.

The day before the Green Bay Packers’ home opener against the Seattle Seahawks on Sept. 20, the duo came together and, using supplies sponsored by Cheesehead TV, painted the entire design in just 14 hours. On it, Packers running back Eddie Lacy is turning into The Hulk – one arm cradling a football in a giant, gloved hand, the other reaching toward the Super Bowl 50 trophy – a bold statement in all caps coming from a quote bubble, “You won’t like me when I’m angry.” 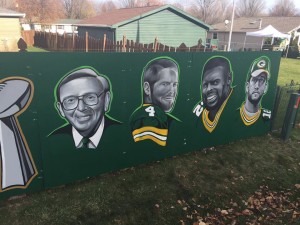 Little did they know the fence would be the deciding factor in being selected as the winners of a Campbell’s Chunky Soup sweepstake to meet Eddie Lacy at Lambeau Field.

“Halfway through the process of painting Eddie Lacy, I posted it on Twitter,” Young said. “…One of my friends tagged Eddie Lacy in the image and the next thing you know, Eddie Lacy retweeted it and said, ‘This is mad cool.’ And then we met him [Nov. 2] and introduced ourselves as the people who did the fence. It was crazy.

“He couldn’t believe it,” he continued. “He even told us that he took a picture of it, framed it and sent it to his mom down in Louisiana and now it’s the focal piece in their living room.”

But that wasn’t the end of the payoff for Young and Statz. Just a few weeks after unveiling the fence, a man who lives nine houses down from the Lacy-Hulk fence contacted them. He, too, wanted a fence to amp up the Lambeau Field neighborhood’s public displays of affection for its home team.

The two men were back at the drawing board and within weeks, had an intricate design planned. It would honor the team’s tradition of excellence by featuring eight portraits of the franchise’s legends, a listing of its Hall of Famers, and a Hall of Fame ring. 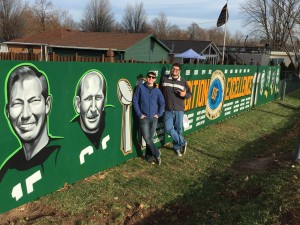 For more than a week, the two painted the design on 17 medium density overlay (MDO) panels spanning 68 feet – Young working on the portraits and Statz working on the lettering and ring. On Nov. 14, less than two weeks before Brett Favre’s Thanksgiving day retirement ceremony at Lambeau Field, the fence was installed.

Naturally the two are hoping for a repeat of their Lacy meeting, albeit with the newest inductee to the Green Bay Packers Hall of Fame.

“If Brett Favre comes here on Thanksgiving Day and he mentions something about this, I will cry,” Young admitted. “I will straight up big man cry because he was my hero growing up.”

Regardless of if they meet their childhood hero, the two are certain that their futures are brighter thanks to the popularity of their fence murals.

“It’s hard for an artist to get their name out there, especially when a lot of them are going for the same dream,” Statz said. “It’s kind of like a lot of NFL players; when you’re a kid, you just dream of being on Lambeau Field running around with the football. It’s equivalent for us.”

For more on the artists’ individual businesses, find ‘Forever Young Designs’ and ‘ZAS Designs’ on Facebook or visit ZASDesigns.com.