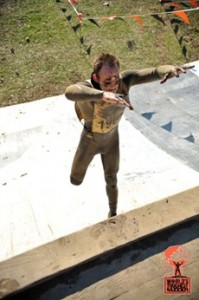 Sturgeon Bay’s Matt Hanson is a pretty crazy guy. That’s really the only way to say it. Hanson was one of a number of like-minded athletes who competed in 2012’s World Toughest Mudder competition, a 24-hour race where contestants are expected not just to run 10-mile laps, but to overcome extreme obstacles (like dangling 10,000 volt live wires and 80-yard swims through freezing water) while doing so.

Hanson, a former swimmer and pole-vaulter at Sturgeon Bay High School who now attends the University of Wisconsin – Oshkosh, finished seven laps in 23 hours and 41 minutes to place sixth in the men’s portion of the competition. In an interview with reporter Matt Ledger, he talked about his experience at “the world’s premier obstacle course series.”

Matt Ledger (ML): Was the start of the race intimidating, or were you ready because of your qualifying run?

Matt Hanson (MH): I’ll tell you what, I’ve been intimidated since the day I signed up for this. The cold, I can deal with the cold. I’m from Wisconsin. We know what cold is like…but cold and water just did not sit well with me. I was kinda freaking out about that and just the sheer magnitude of a 24-hour race. When I signed up, the most running I’d ever done was my sister and I walked/ran to Egg Harbor…and it took us six hours.

And I was thinking, oh my gosh I’m going into this World’s Toughest Mudder, and the guy who won last year ran just shy of 60 miles. So I was incredibly intimidated, I was scared. But at the same time it just shook me down to my core, and I was ready for it.

ML: Are the obstacles the same on each lap or does it change?

The condition of the course the first time around was great. All the mud was pretty solid and it was pretty warm. But as you came for the second time around, all that mud that was solid you sunk six inches into.

It actually became legitimate slush about two hours later because at seven o’clock everything started to freeze over. There was about two inches of ice on everything. So, there were boards you’d have to walk over, and they’d be covered in ice, making it basically impossible. There was like a 20 to 25-foot obstacle you had to climb over, with rungs spread out by four feet, and you had to climb over that. That got covered by two inches of ice.

So the course only got harder because of how many times it was traversed, and the cold made it nearly impossible.

ML: Did you get to eat or drink anything substantial during the race?

MH: During the first Tough Mudder they gave us all sorts of stuff, like GU, which is a really sugary gel. And they gave us bananas and protein bars and Gatorade and all this other stuff.

At this one they had bananas, water, chicken broth, and salt packets. I did the math and I ate over 35 green, green bananas. These were as green as you can get bananas. And that’s how I like bananas, so it worked out pretty well for me.

Every other aid station, so every four miles, I took two packets of salt to cut down on lactic acid build-up. And I just drank a ton of water. When I did take my big break I ate some peanut butter and a protein bar, so I had that, but for the most part my diet was green bananas, salt, water, and chicken broth. And nine times out of 10 the chicken broth was going in my socks to warm up my feet, in my gloves to warm up my hands, or in my suit to warm up my body.

ML: What was the toughest obstacle you faced? How’d you overcome it?

MH: The toughest obstacle was by far the monkey bars, which they call Funky Monkey. It was like the roof of a house. You go up then you go back down, with a peak in the middle. And I’m decent at monkey bars; I do a lot of pull-ups and a lot of weightlifting so I’ve got strong hands. But they were just greased with mud and water and ice making it basically impossible to hold on. 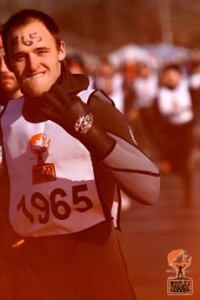 I fell off of them a lot, but another one that was really hard was after the 80-yard swim there’s a cargo net you have to climb up. Every time I got out of that water my muscles would just freeze up on me. It hurt so much to grab the cargo net and pull myself up after the 80-yard swim because it was so cold. It was this incredible, incredible pain.

ML: What did you take away from completing the race? What will you remember most about the experience?

MH: What I can take away from completing the race is that during my seventh lap I took a break in the aid station. I got cold, and I felt defeated. I was thinking about running out six hours of time, and I just got down on myself. I kind of threw what is known in my family as a ‘Poor Me,’ and I actually lost three places because of getting down on myself.

Then, when I got back out there, I felt that I had let myself down by taking that time off and ever thinking that I wasn’t going to finish this. So what I’m really going to take away from this is you need to go. You can’t stop.

I took back two of those positions. I sprinted after I figured out I’d been down on myself. I sprinted the last seven miles of that course. I found energy in places I didn’t even know I had it.

ML: Are you going again next year? If so, how will you prepare? And are you ready to be number one next year?

MH: I’m coming back next year. I trained for three and a half months for this event. I went from three miles to running marathons.