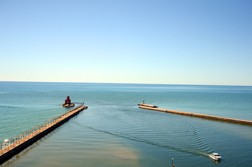 The Sturgeon Bay Coast Guard Steering Committee is looking to reinforce the city’s relationship with the servicemen and women of the U.S. Coast Guard.

“We were at another meeting,” says Desh, who was stationed in Sturgeon Bay for part of his own tour with the Coast Guard, “and we started talking about what it means to the city to have the Coast Guard here. And Steve, who is a former Marine, said, ‘Our three Coast Guard units are our military service. They’re right in our backyard, and we should make sure we’re meeting their needs.’”

In order to find out what those needs were the committee, which now meets monthly and includes about 10 members, invited the commanding officers from the Sturgeon Bay Canal Station, the Coast Guard Cutter Mobile Bay, and the Marine Safety Detachment in Sturgeon Bay to join in their conversations.

The committee also circulated a survey which 60 of the nearly 70 Coast Guard members in Sturgeon Bay answered. According to committee member Karen Hintz, 61 percent of those who took the survey are under the age of 32, 31 one of them have spouses, and most of those with spouses have children.

The survey showed that these young families are running into the same housing problem that many looking to move to the area have encountered.

“Every year between 19 to 25 military members and their families are reporting to Sturgeon Bay looking for housing,” said Hintz, at a June 19 presentation before the Sturgeon Bay Common Council. “Their challenge is they’re competing with other people here, seasonal home owners and others, and they need housing in a quick time.”

But finding a lead on housing is just the beginning of the information gathering that newly stationed members have to do.

“They didn’t grow up here, so they don’t know the inside scoop,” says Wayne Spritka, Officer-in-Charge at the Sturgeon Bay Canal Station. “For someone who’s lived here their whole life, it’s easy to know where to go for something like a doctor or for child care. We just don’t have those options.” 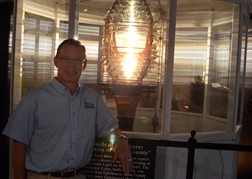 In order to combat these difficulties, the steering committee has been working to compile online resources that servicemen and women moving to Sturgeon Bay can use to get information about the city. Steve McNeil also issues a welcome letter to each newly stationed servicemember, encouraging them to contact the city if he or she needs assistance.

The committee has also been working to increase the Coast Guard’s presence within the community, specifically by expanding and enriching the city’s maritime festival. This year’s festival takes place from July 26 to August 6, and features a Coast Guard Family Picnic, an awards ceremony naming the Coastguardsman of the Year, a children’s parade, and a public golf outing.

The hope is that, eventually, Sturgeon Bay will be able to successfully apply for the federal government’s official Coast Guard City designation. Only 14 other cities throughout the country have currently received the Congressional designation, which is the federal government’s way of recognizing communities that regularly reach out to Coast Guard personnel and their families.

Working towards the designation isn’t the committee’s end goal, but simply a way to show that they’ve accomplished at least some of what they set out to do.

“What that would mean to me…is that we’re doing our job,” says Desh. “That official designation would be proof-positive that we’ve made our city a good place for these people to live.”