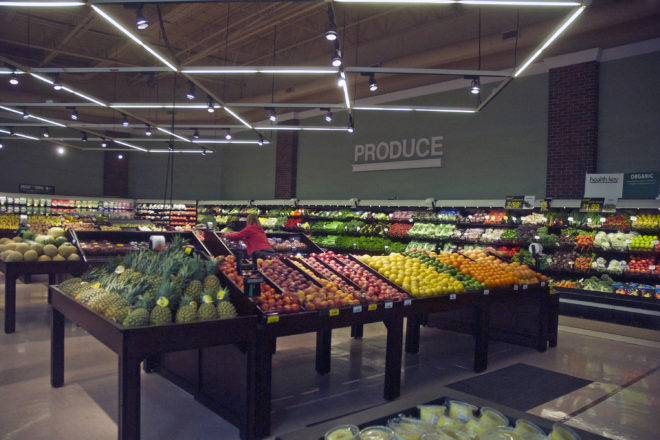 The produce department is one of many areas that got spruced up in the Pick ‘n Save upgrade in Sturgeon Bay. Photo by Jim Lundstrom.

As Lynn Lyon finished a short photo session with two of her team members in front of the new cheese display at the recently refreshed Sturgeon Bay Pick ’n Save, a customer came up to her and said, “That must have been easy for you because you are always smiling!”

It’s obvious Lyon is happy in her work and proud of the investment corporate owner Kroger is putting into an update of the 27-year-old supermarket. Kroger bought the Wisconsin Roundy’s Pick ’n Save chain in late 2015, one of a number of acquisitions that has made Kroger the largest supermarket chain and second only to Walmart in general retail revenue in the U.S.

“My employees are thrilled. It’s nice to be invested in,” Lyon said of what she calls “a major refresh” of the Sturgeon Bay store.

“We’re very much enjoying the relationship with Kroger. They are putting thought in the stores,” Lyon said. “It’s nice they’re looking at all of them.”

Lyon has spent 4½ years at the Sturgeon Bay store, but is a 20-year veteran with Pick ’n Save, having previously worked in Green Bay and the Fox Valley. She worked her way up to manager from the meat department, but even as store manager, she is hands-on. Today she manages around 65 employees.

But like many door County businesses, Lyon said her store is looking for employees.

“Especially with these changes,” she said. “We’re looking at full- and part-time in all departments, and we’re a year-round employer with benefits.”

Lyon’s dedication to the store is obvious when she comes out for an interview from the bakery area carrying containers of sweet rolls that need to be put on display before she can talk to a reporter. Later, she notices a rack of buns should look more orderly and inviting, and after making a few quick arrangements, they are so.

“The changes we made actually made sense,” she said of the store refresh, mentioning one of the big and most obvious ones, consolidating cheese – which previously could be found in three separate sections of the store. Now, cheese is front and center when you wheel your cart into the store, and, why not? This is Wisconsin.

“Now we have more of a selection and we’re carrying more local cheeses,” she said.

And to help in your selection, on key shopping days (you know what they are), cheese tastings will be offered.

Lyon also points out the subtle color schemes assigned to the different departments.

“It is a corporate design,” she said. “The paint schemes are the same, fixtures are the same. They went through and put a lot of thought process into it. The color scheme is really nice because it separates out departments.”

Walking deeper into the store, the eye is naturally drawn to the roomy produce department. Dark colors and soft lighting invite you in, offering up the tempting produce as the stars of the designed landscape.

“The produce department has gotten the biggest upgrade,” Lyon said, pointing out the extensive “wet rack,” where all the fresh produce is misted to keep it fresh. The wet rack is packed with what appears to be an artist’s touch, just enough of everything, and it looks fresh, wholesome, right off the farm.

“I love it,” she said. “It shows off our produce so much more, I think, especially with the dark color. It makes the produce pop out more. The majority of compliments we’ve gotten so far have been here.”

Same in the redesign of the meat department. There is a beautiful order to things so that you can see what you want aisles way.

Speaking of aisles, there now seems to be miles of them. Or, at least, they seem greatly expanded.

“It was a simple fix,” Lyon said. “It’s great for our customers, especially during the summer when you get congested. That’s another thing our customers noticed, too, the expanded aisles.”

In addition to the aesthetic physical updates to the building, Lyon points out that the update pays attention to service and offerings as well, including self-service donuts in the bakery department, the addition of baked chicken to the rotisserie and broasted chicken already offered in the deli, and a greater selection of organic specialty meats (bison, lamb, grass-fed beef and free range chickens).

They’ve also started selling live lobsters on weekends, until they sell out. Last weekend was the first run.

“They did pretty well for the first weekend,” Lyon said. “It’s something different through the summer. A little surf and turf.”
She also mentioned that she had hoped this story might come later when more of the updates were completed, including an update to the already impressive floral counter, new lighting, new registers and a replacement of the new-in-1990 belt systems at the checkout counters.

“In September we get a new IT system and at that point will be able to do the chip cards,” she said.

Perhaps the biggest breakthrough for Door County residents who are tired of hearing visitors complain about the “high” prices in places we do business regularly, Lyon said her store is undergoing a price realignment based on the regional differences in advertised Pick ’n Save prices.

“We’re really excited about that,” she said. “In a few weeks we’ll have new pricing.”