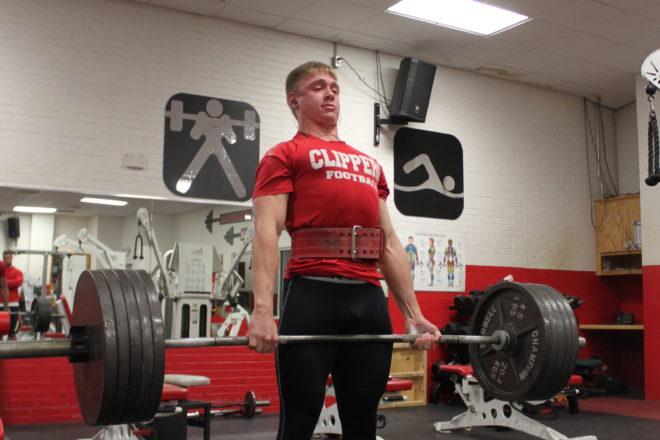 What began as a side gig for football players and track athletes at Sturgeon Bay High School has transformed into a competitive club all its own. The Sturgeon Bay Powerlifting Club has grown to around 24 students, including a strong female representation.

“It’s transformed me as an athlete,” said Brenna Zuehlke, junior, who also participates on the basketball and track teams. “Coaches see the results that it makes.”

Zuehlke and fellow captain Luke Brinkman have led the Clippers to titles across the state while making leaps in their other sports as well.

This year the team hopes to send 24 students down to the next regional meet in Appleton on Jan. 6.

“Everyone that I’ve talked to that has gotten into it has all said it’s definitely helped them with their sport,” said Vercauteren.

“I lifted for football and it’s grown out from there,” said Brinkman. “It’s helped greatly with my speed and explosiveness. I wouldn’t be the athlete I am without lifting.”

Vercauteren said there is a stigma around powerlifting that his athletes have helped debunk through their success in other sports.

“A lot of people think powerlifting is a very static thing or it’s very stiff, but that’s definitely been proven otherwise especially with the sprinters,” said Vercauteren.

The three lifts in the sport – deadlift, bench press and squat – all require full body coordination and conditioning in order to perform.

Stabilization of ankle joints, knees and lower back transfers directly into greater stability in football linemen and shotput throwers, who are often put under significant stress during their activities.

“It teaches you a lot of body awareness and how to move your hips,” said Vercauteren, “things that are really important for a football player or a basketball player.”

But the athletes have begun embracing the sport for what it is and not as a supplement to their other athletic endeavors.

In a regional meeting in Omro on Dec. 2, 14 lifters competed and 11 placed in the top five of their weight classes. Brinkman and Zuehlke won best male and female lifters of the meet.

After the January meet in Appleton, the team will head to Neenah on Feb. 3.

“It will be interesting when we go against them to see if little Sturgeon Bay can hold their own against those big lifters,” said Vercauteren of the Division I school.

The state meet will be held in Mauston on March 10 and 11, but the team is most excited to make a showing at the national meet, which is conveniently held in Appleton March 22 – 25.

The team has already qualified six lifters for the state meet, but Vercauteren thinks there will be a few more on the list by March.