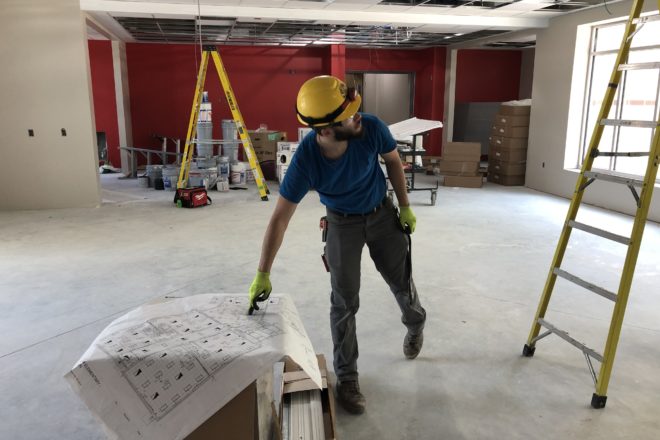 Vincent Strachan, an apprentice with Eland Electric Corporation, checks his work in the multipurpose room within the Sawyer Elementary School addition. Photo by Craig Sterrett.

How can schools afford their major building additions when the costs tripled and quadrupled during the past year for 2-by-4s and plywood?

Sturgeon Bay public school officials held their groundbreaking ceremony the evening of May 19 for additions to Sunrise Elementary, Walker Middle School and the high school, but the district locked in its costs with bids and specifications almost a year ago, Superintendent Dan Tjernagel said. Still, he knows people have experienced sticker shock on certain building materials when they shop for themselves.

“We were just talking about that,” Tjernagel said. “The physics class builds trebuchets, where they launch items, and when they had done that previously, the 2-by-4s they bought were like $2.50. Now they were $10.”

Eric Brandt, Miron Construction’s site manager at the Sawyer Elementary School addition, said his company bought most of the materials for the Sturgeon Bay projects before costs skyrocketed and is mitigating increased expenses to the best of its ability.

“Right now, some lead times have been affected, which you work through,” Brandt said. “But when the project was bid, we were able to lock in pricing for a lot of stuff.”

Regarding materials, Tjernagel said the biggest problem the district has encountered so far was Miron’s difficulty obtaining a certain type of window for the Sawyer Elementary addition. The contractor and district officials agreed to order a slightly different style that was available.

The district and Miron have worked to expedite the projects in an effort to minimize the impact on students and taxpayers. Contractors worked in earnest on the Sawyer addition during this school year because Miron could safely cordon off the construction site from the existing classroom spaces. Tjernagel said that ventilation, cabling, electrical and plumbing that terminate at the northeast end of Sawyer school – Sturgeon Bay’s newest at about 20 years old – were designed for easy connections to a future addition.

He hopes contractors can complete most of the projects by the time the new school year begins for students Sept. 1.

Voters in winter 2020 approved the $16.8 million referendum for additions to the high school, middle school and Sawyer and Sunrise elementary schools with a 1,885-to-953 vote. The district will close Sunset Elementary and move the preschool, four-year-old kindergarten and K5 classes into the Sawyer addition. The 8,500-square-foot addition at Sawyer includes four classrooms, a multipurpose room and six restrooms, and it’s more than 85% complete.

At the time of the referendum, Tjernagel anticipated the cost to taxpayers at $1.47 per thousand dollars of taxable property, or $147 for a $100,000 house. By this year, that rate increase had lowered to $1.40 per thousand.

Other Door County districts have embarked on major projects in the past three years: Gibraltar’s $4.4 million remodel of its library media center and adjacent classrooms; Sevastopol’s ongoing two-year, $25 million project to replace the oldest sections of the school; and Southern Door’s $6 million project to eliminate its classrooms-without-walls open concept and improve accessibility and school safety. Southern Door completed its project in 2020, but because of pandemic protocols, it was not able to host an open house to show voters what they had approved.