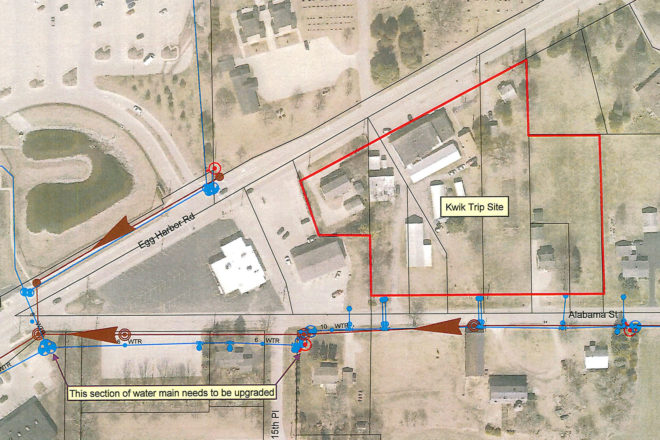 The water main replacement Kwik Trip needs for its development, for which the city has agreed to share half the cost.

“Rumors are floating around town that this wasn’t going to go through,” said Mayor David Ward during the council’s first meeting in February, referring to the Kwik Trip development slated for Egg Harbor Road.

That’s not the case. What was the case was that a 490-foot section of water main on Alabama Street serving the project site was undersized and unable to support additional demands. The six-inch pipe needed to be increased to an eight-inch pipe, and Kwik Trip asked the city to cost-share the pipe replacement.

Since last autumn, Kwik Trip has been working through the city’s approval process toward a development on Egg Harbor Road. Its store, car wash and gas pumps will be located on about 4.5 acres, roughly across the street from the Walmart entrance, with access on both Egg Harbor Road and Alabama Street.

The council agreed unanimously to pay half the cost of $92,000 that’s estimated for the replacement, not to exceed $46,000. If the cost exceeds that estimate, Kwik Trip has agreed to pay the remainder.