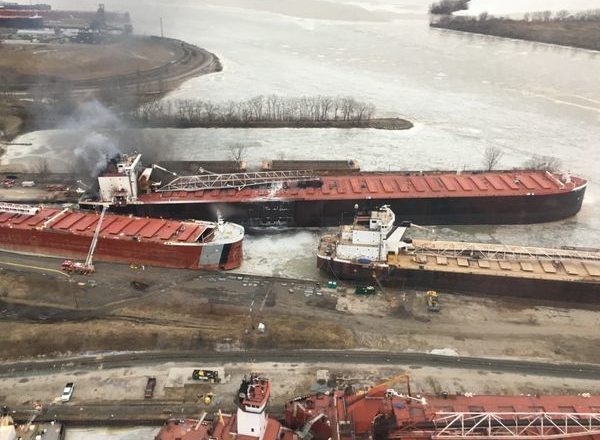 The Coast Guard conducted a pollution assessment of the Maumee River after a fire Saturday on board a vessel in the Port of Toledo. Members of Coast Guard Station Toledo notified Coast Guard Sector Detroit Command Center watchstanders about the fire around 9:30 pm. The Coast Guard responded, along with firefighters from eight local fire departments. The fire was located on the stern of the 762-foot vessel St. Clair, moored in the Port of Toledo for winter-season repairs. No one was aboard, and there was no cargo on the vessel. Its owner, American Steamship Company, contacted the National Response Corporation, which has contracted Marine Pollution Control to be on the scene and prepared to respond to any possible pollution. The current priorities are mitigating any environmental damage and preventing any pollution. The St. Clair was built at Bay Shipbuilding in Sturgeon Bay, and when it was launched on July 24, 1975, it was the largest vessel ever to be side-launched in the Great Lakes.