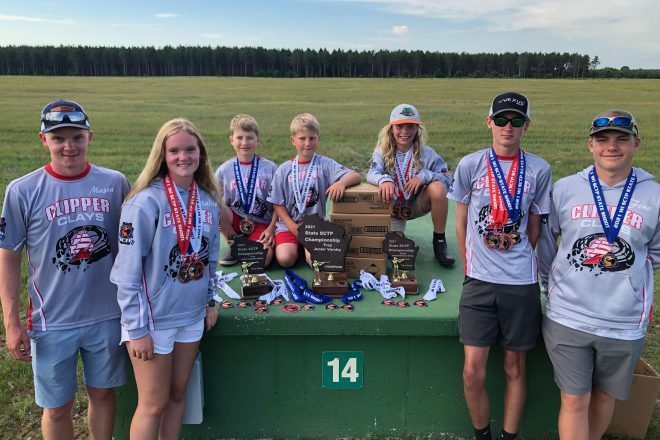 Sturgeon Bay schools’ skeet and trapshooting team continues to grow, thrive and receive community support. Coming off a spring season in which several Clipper Clays participants earned trophies in state competition, all team members will soon be better equipped to sharpen their skills.

Dan Tjernagel, superintendent of Sturgeon Bay schools, recently informed the school board and public that Dave Labott Sr. and Dave Labott Jr. donated $1,000 apiece to fund the purchase of a simulator that allows team members to launch their own targets and fire at them on the range without assistance.

Adding a fourth and fifth outdoor simulator for the five-person squads comes as another step forward for the five-year-old program led by Matt Propson, who previously coached baseball for 17 years.

“It will keep score for them,” he said. “It’s a one-on-one device. It measures where their point of impact is when they shoot at a target and what their shot pattern is. It measures their reaction time. It’s a great aid for them as they are learning the sport of trapshooting.”

The students can set the simulator on a tripod and receive their statistics from each shot, as well as store and track their data on an app.

Thanks to previous donations, Clipper Clays team members also use a computer-driven wall simulator located in the archery building at the Door County Rod and Gun Club, which hosts the team. Team leaders make calibrations for each student by putting lasers on the guns and measuring the participants’ height and arm length. A computer system saves those measurements to be adjusted from year to year.

The Clipper Clays program has grown from 32 participants in middle school and high school the first year to about 55 this past February, and interest remains “super strong,” Propson said. Some students participate prior to fifth grade if they pass firearm-safety courses just like the other students, and if they show they can be responsible and safe.

This past spring, the Sturgeon Bay High School’s junior varsity team won the state championship, led by a 99 out of 100 from Calvin Richard; and the middle school team, led by Trygg Stuth’s 99, took second out of 2,000 participants. Competitions take place on Sundays, allowing student-athletes who are involved in other sports to participate.

“Trapshooting over the last 10 years has been the fastest-growing sport in high schools across the country,” Propson said. “Currently there are over 3,000 kids in Wisconsin involved with it.”

Denmark, Luxemburg-Casco and some Green Bay schools have established teams; Washington Island often has individual competitors; and Southern Door is launching a program.