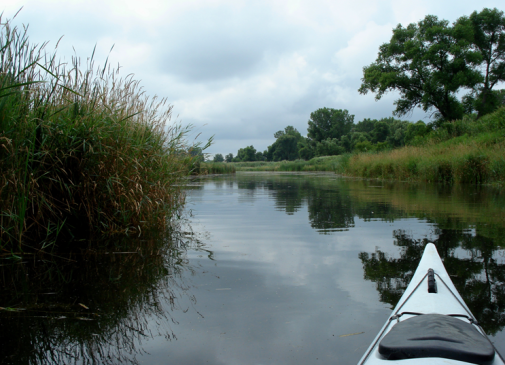 The Cove at Crossroads at Big Creek. Crossroads in Sturgeon Bay is one of the sites identified on the preliminary list of natural areas to be included in a new Bay of Green Bay National Estuarine Research Reserve System (NERR). Source: University of Wisconsin-Green Bay.

Lands in Sturgeon Bay have made the list of preliminary recommended sites for the natural areas to be included in the proposed Bay of Green Bay National Estuarine Research Reserve System (NERR).

The University of Wisconsin-Green Bay is hosting public meetings Sept. 7 and 8 to provide an opportunity for anyone who wishes to participate to ask questions and share comments about the proposed site designations of the Lake Michigan reserve. A presentation about the proposal and the NERR will be provided at both meetings.

An in-person public meeting will be held Wednesday, Sept. 7, 1 pm, in the STEM Innovation Center on the UW-Green Bay campus, 2019 Technology Way in Green Bay.

In addition, members of the public may share written comments on the recommended reserve sites with Emily Tyner, UW-Green Bay director of freshwater strategy, at [email protected] All written comments must be received no later than Sept. 15.

All comments received will be considered by the state when formally nominating a site or sites to the National Oceanic and Atmospheric Administration (NOAA).

NERRs are a national network of 30 sites across the coastal U.S., including the Great Lakes, that are designed to protect and study estuaries and their coastal wetlands.

Established through the Coastal Zone Management Act, the reserves represent a partnership program between NOAA and the coastal states. NOAA provides funding and national guidance, and each site is managed on a daily basis by a lead state agency or university with input from local partners. For the Green Bay NERR, the University of Wisconsin-Green Bay is leading the designation process.

At the local level, a Green Bay NERR will offer a coordinating force to manage, restore and protect the Green Bay ecosystem, with a programmatic focus on research, education, stewardship and training.

About the Site-selection Process

Site designation is a six-step process that typically takes between four and six years to complete.

Door County’s support of the new NERR came early in 2019, when both the Door County Board of Supervisors and the Sturgeon Bay Common Council approved resolutions in support of a NERR for the Green Bay watershed.

Three UW-Green Bay committees were responsible for developing the list of NERR natural areas. Only publicly accessible lands within these areas were eligible to be included. In total, the recommended reserve site includes approximately 11,500 acres of publicly owned land.

Although the preliminary list of natural areas has been selected, the site for the reserve’s visitor/education center will be selected later.

Next Steps in the Nomination Process

Following the public hearing, UW-Green Bay will consider all comments received and develop a formal document nominating a reserve site. If the governor’s office approves the site nomination, it will go to NOAA for another review. That process can take several months to complete and concludes with NOAA sending a letter to the governor either accepting, rejecting or suggesting modifications to the nomination.

Learn more about the NERR designation process at coast.noaa.gov/nerrs/about/designation-process.html.