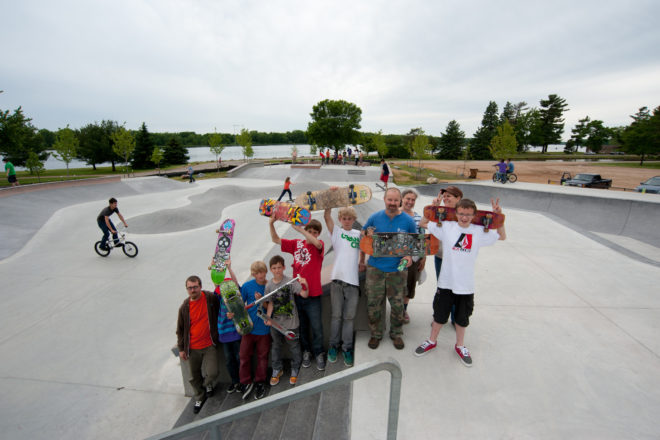 The Sturgeon Bay Skatepark Initiative made an inspiration-gathering field trip to the Stevens Point Skatepark in 2011. The group went on to raise nearly $450,000 for a skatepark in Sturgeon Bay that opened in September of 2015. Photo by Dan Eggert.

The Sturgeon Bay Skatepark Initiative (SBSI) announces it has fulfilled the final piece to a nearly $450,000 fundraising effort by completing payment to the City of Sturgeon Bay for bridge financing it provided.

SBSI was formed in March of 2011 by a group of teenagers, and steered by a small group of adults, who saw a need for a safe public place to skateboard in Sturgeon Bay. After a generous “kick start” donation from Door County Skate, SBSI retained the services of nationally known Grindline Skateparks to develop a conceptual design for the skatepark. The City of Sturgeon Bay provided space and in-kind support; no public funds were spent on the construction of the park.

By May of 2014, after three years of fundraising, SBSI raised more than $400,000 in cash and pledges. The City of Sturgeon Bay agreed to advance $42,500 against outstanding pledges from donors, allowing the park to be built immediately. The skatepark was constructed by Dreamland Skateparks, one of the country’s premier skatepark firms and opened Sept 5, 2014. Since opening the park, SBSI raised an additional $20,000 to fund park amenities such as an observation platform, a shade structure, an information kiosk and park signage.

Looking back on the project, SBSI co-chair Matt Dixner Young said, “We set out to build a skatepark. While we accomplished that, we also demonstrated that a grassroots organization can partner with local government and accomplish good things for the community. We are grateful that the city trusted our donors to follow through on their commitments to fund an amazing recreational asset that can be shared by our residents and visitors.”