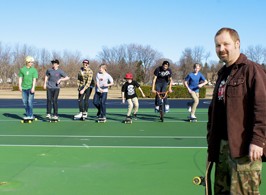 Now that designs for the 10,000 sq. ft. skatepark to be built on Sturgeon Bay’s West Side are in, fundraising efforts from the Sturgeon Bay Skatepark Initiative (SBSI) are going to ramp up.

“We wanted to know the full amount right from the beginning, so we would know exactly how much it would possibly cost,” said co-chair Laurel Hauser at October’s SBSI meeting. “If we need to scale back on any of that we can, but the full figure came in at $520,000.”

The SBSI has raised about $100,000 so far. While the group recently gave proposals to potential large donors, they are also going to continue with youth-staffed fundraisers to show the community the dedication of the kids who want the skatepark.

“The fundraising that you guys do, even though it’s small dollar amounts, makes such an impact in the community because [other donors] see that you’re willing to go out to work for it,” said co-chair Matt Dixner Young, speaking to the young skaters at the SBSI meeting.

The skaters have been placing donation cans at businesses throughout Sturgeon Bay, putting on middle school dances, and staffing events throughout the peninsula.

The next big fundraiser the skaters are hosting, and skating at, is an electronics recycling event Oct. 20, 8 am – noon, at the Baylake Bank employee parking lot on the corner of 3rd Avenue and Jefferson Street.

Anyone can bring anything with a plug down to Baylake Bank to be carted away by Cyber Green, an electronics recycling company based out of Green Bay. If businesses have a bunch of electronics, they can notify the SBSI before the day of the event, and Cyber Green will arrange for pick up of the old electronics.

“Baylake Bank had one a couple years ago, and they filled up a couple semis,” said Jeff Krohn, a Baylake Bank employee and parent of a skater. “The bigger the better because we get paid $10 for basically every pallet we fill up.”

Most every electronic item is free to drop off, with the exception of very large items, televisions and computer monitors.

In the coming months skaters will be spreading the word about other fundraisers, including food sales at Pick ‘n Save and a second skateboard art auction this April.

“The next six months are going to be the real critical fundraising part of it,” said Hauser. “We’re poised to make some inroads. So skaters, don’t get discouraged by the big numbers, it is going to happen.”

As the SBSI continues to fundraise, interim skating will continue in the Sturgeon Bay YMCA parking lot, and it’s possible that skating demos will be held at the YMCA this winter. The SBSI will also be meeting regularly on the first Thursday of each month.