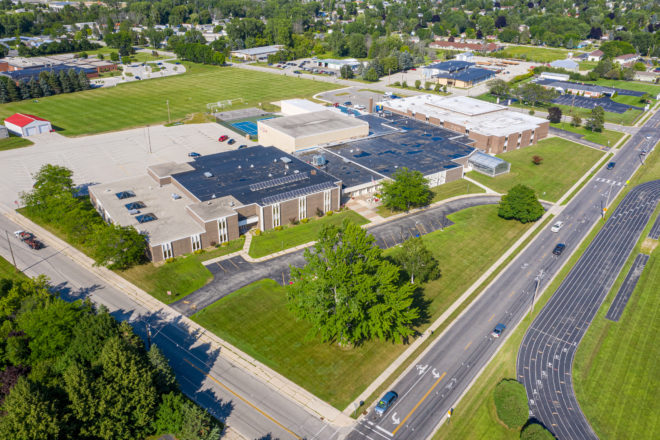 The library at Sturgeon Bay’s Sunrise Elementary School will receive $207,000 worth of improvements this summer because the district had money left over from $16.9 million in voter-approved building projects.

The Sturgeon Bay School Board this month authorized the district to renovate, reconfigure, electronically update and spruce up the learning resource center at Sunrise. Superintendent Dan Tjernagel said discussions of the upgrades that facilities needed throughout the district took place in 2019, but the Sunrise library did not rank as high as other priorities for improvements that were included in the April 2020 referendum.

After Miron Construction oversaw two years of construction of a new wing at Sawyer Elementary and minor improvements at Sunrise, as well as renovation, accessibility improvements, restroom repair and upgrades, and classroom and office improvements at the junior high and high school, the school board needed to decide this month how to spend the remaining bond money, which can be used only on capital improvements.

Tjernagel said the Sunrise library will receive new flooring, wall covering and paint, and more or better-located outlets and receptacles to keep up with the increasing and changing uses of technological equipment. Tjernagel said the library moved its way to the top of the remaining priority list in part because Sunrise had the fewest improvements and upgrades among the district’s schools.

Instructors and staff will also discuss how best to reconfigure shelving and other fixtures in the library for its many uses, Tjernagel said, because one of the best ways to incorporate flexible learning spaces in a school is to update the library – a facility to which all students and staff have access.

Sturgeon Bay school leaders have big plans for the newly reformed summer school this summer, and they want to attract good teachers and support staff to help.

The board this month set wages for summer school at $26 per hour, or $28.50 for instructors with master’s degrees or doctorates. The reimagined summer school will still serve students who need to catch up on subjects and skills, but also it will include electives and sports- and fitness-related classes.

District leaders will get a better idea of the number of classes later this month because district students are signing up and providing wish lists of classes and activities. The building principals districtwide have worked up plans for two dozen different scenarios, depending on interest and enrollment.

After district students enroll, students from neighboring districts – as well as parochial and home-schooled students – may sign up. Likewise, the district may open up teaching and work opportunities to nonemployees if district personnel do not fill all of the open positions.

Most likely, the summer school will take place in mid-June and late July,  and last for three hours in the morning for students and about four for teachers and staff. The district is working with the YMCA and Boys and Girls Club to allow for programming and activities in the afternoons, and it will provide bus service. Early-education and 4K students would attend morning summer school at Sawyer Elementary.

The district doesn’t “make money” on summer school, but Tjernagel said that in addition to academic improvement, there are positive fiscal reasons for relaunching summer school.

Luedtke said he hopes to offer a class by this fall, but that would depend on various factors, including the need for at least a minimum number of students to make it viable for NWTC to staff the off-campus class. He said it would provide Sevastopol students – and perhaps other area students – a chance to gain college credit outside the school day, and it could allow students who are on a college path to gain a new skill set.