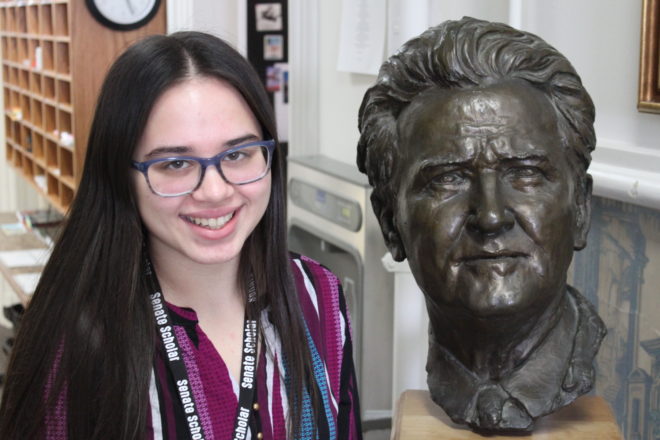 Here’s a thought exercise: If you sign a lease with a landlord who says there are no pets allowed, may you take your dog into the apartment?

That may be an easy one, but what about a pet rock?

Sturgeon Bay junior Nalani Bicoy and a dozen other students from high schools across Wisconsin debated pet rocks and much more during a weeklong visit to Madison as part of the Senate Scholars program with the Wisconsin legislature.

During the program, students visited state agencies, lawmakers, Supreme Court justices and others to learn how our government works and get some experience of their own.

“Juniors and seniors come to the capitol, and they get to be involved with every facet of the legislature, as well meeting people from the executive branch and judicial branch,” said Tammy Wehrle, legislative education and outreach officer at the capitol.

The students involved in this capstone project worked with legislative bureaus to draft a bill and debate it in committee at the end of the week. In talking about the bill to change the minimum age for getting a tattoo, Bicoy quickly fell into a debate style, saying, “Even if we do lower the age, we should at least have parental consent required because I don’t think everyone should be able to get a tattoo.”

Bicoy already has unusual experience in the world of politics: Her grandfather is Dave Hansen, the current state senator for the district that includes Green Bay.

Still, Bicoy is not completely enthralled with the life of a senator in divisive times.

“The Senate is kind of partisan right now, so it just seems hard to work with,” Bicoy said. Many students commented on the Senate floor session they watched on Feb. 13, when tensions flared over the removal of Colin Kaepernick’s name from a resolution recognizing Black History Month. Kaepernick is the controversial pro-football player who protested police brutality against African-Americans by kneeling during the national anthem.

But Bicoy spoke admiringly of a meeting with Supreme Court Justice Rebecca Dallet and the legal system, including how we should define pet rocks.

“Exercises like that are really cool because it’s like, how do you define these things? Who defines the law?” Bicoy said. “It’s all about language and how you interpret it. One word can mean something to someone and mean a completely different thing to a different person.”

“[The program] opens up the door for students to come in and understand how the legislature functions, and I think with civic education, it helps them see from the inside,” said Wehrle.

Three groups of 11 students are visiting the capitol this spring, including a student from Southern Door High School who will visit in April.