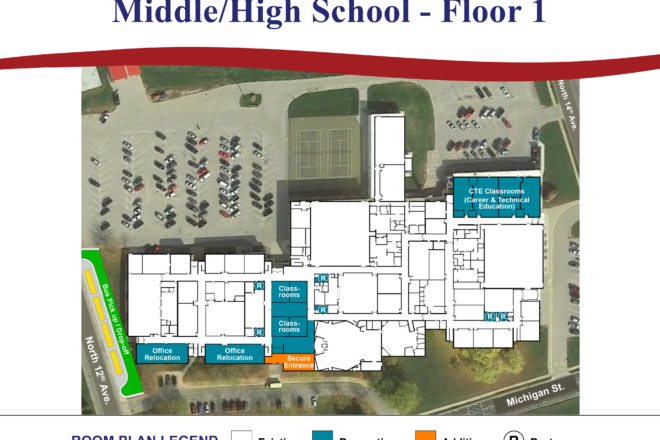 The Sturgeon Bay School District intends to add a secure entrance to the middle/high school building, swap the district and high school offices with classrooms, and update career and technical-education classrooms as part of its 2020 referendum. Submitted.

The Sturgeon Bay School District will host an interactive open house March 4 in support of its $16.84 million facilities referendum, which will go to a vote April 7.

Representatives from the school board, administration, Eppstein Uhen Architects and Miron Construction, plus the district’s business manager, will be present to answer questions. A short presentation and tours of the intended renovation areas will be available.

Superintendent Dan Tjernagel said the key to garnering so much support was involving community members early and finding a sweet spot that most could agree on, whether they were teachers, parents or neither.

The plan has been in the works for three years, and last spring, the district hired Eppstein Uhen Architects and Miron Construction to evaluate the state of each building and identify needs. Before the survey, they conducted work with focus groups.

Updating the career and technical-education (CTE) classrooms in the middle and high school was very popular among respondents, Tjernagel said.

The main goal with the CTE classrooms is to remodel the spaces, and with the allotted money, the school may be able to update some of the equipment to better mirror what’s being used in the workforce. Local companies may be willing to donate updated technological equipment.

“Because we have dollars earmarked for some of those updates, if some donated funds come in, one of the things it allows us to do is put dollars toward some of the fair maintenance items,” Tjernagel said.

There are currently three spaces for CTE classes and one section for school maintenance in what was previously an automotive shop. The thinking is to convert that maintenance section to more technical-education space, Tjernagel said, and to open up the inside of the block with windows and doors, or garage doors.

“As we have three different teachers down there, they can have students – because we have middle and high school students who use this – flowing back and forth between the spaces based on what they need to work on,” Tjernagel said.

School security is also a major concern addressed in the referendum. The district tried to reconfigure the district and high school offices on its own in 2018, but it found the cost and size of the project to be too large of a burden. The elementary schools have already reconfigured their offices.

When entering the high school now, visitors arrive in a large, open space with the offices in front of them. Guests must be buzzed in, but theoretically, they could divert their path from the offices into the school once they were inside.

The district plans to swap the offices with classrooms so the offices can be easily connected to an added secure entrance, and those classrooms will be moved to where the offices currently are. Visitors will need to buzz in to the office and then be allowed into the school after signing in. A set of exit doors will also be added.

After closing Sunset Elementary School, the district will renovate the sections of Sunrise Elementary School that were built in 1953. Sawyer Elementary will get a new addition to accommodate the 4K and kindergarten students who will transfer from Sunset.

“The end of the building was actually designed this way,” Tjernagel said. “The way the hallway goes right to the end, that if the Sawyer School building ever wanted to be added on to, the thinking was that would be the perfect place to add on to it.”

Planners hope to create an entrance to that section dedicated to pickup and drop-off for 4K students and their parents.

Aging building-component needs include repairing windows and roofs; updating mechanical, electrical and plumbing systems; improving exterior weatherproofing; and abating asbestos. These improvements are needed most notably at the middle/high school and Sunrise.

Restrooms and ADA compliance across the district are in major need of improvement as well, Tjernagel said.

Tjernagel said believes residents of Sturgeon Bay have pride in their local schools and want to know they’re setting students up for success.

“It is for the kids in the end,” Tjernagel said.

Miron is drawing up potential construction plans and projects the work will take longer than what can be completed during one summer. It’s likely the work will continue during the summers of 2021 and 2022, plus some work time during the school year.

Want to learn more about the referendum? Andrew Kleidon-Linstrom and Myles Dannhausen Jr. take a deep dive during the Jan. 24 episode of the Door County Pulse Podcast, available at doorcountypulse.com/podcasts!