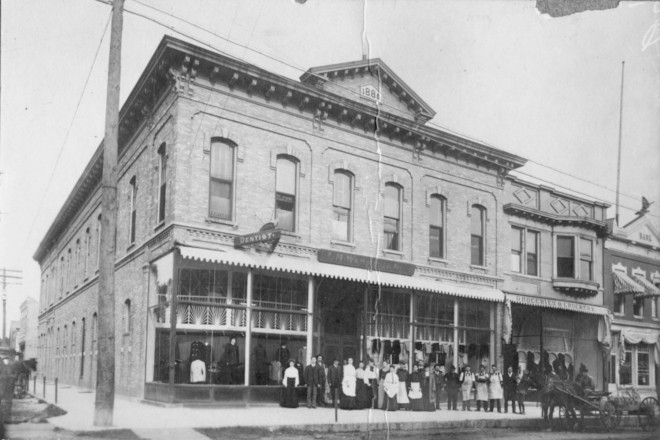 The A. W. Lawrence and Company building, site of present day Younkers store.

In 1850, Oliver Perry Graham built a log cabin on the east shore of Sturgeon Bay, the wilderness of northeastern Wisconsin. The rugged landscape – dense forests, treacherous waters, rocky fields – was challenging, as well as intimidating. But the early settlers were hearty immigrants who recognized opportunity.

Shortly after his arrival, Graham was joined by settlers from countries all over Europe and Scandinavia – farmers, fishermen, and lumbermen who would clear the land, build homes, and establish businesses. Within seven years of Graham’s arrival, Sturgeon Bay was designated the county seat.

The foundation of Sturgeon Bay was laid. In 1862, city records list 222 residents and 30 buildings, including one tavern and a newspaper. The city was officially organized in 1883. Eleven years later, the last of the adjoining villages along the bay were annexed to greater Sturgeon Bay, creating one city split in half by the bay.

Nearly 160 years later, Cedar Street, renamed Third Avenue during World War II, continues to operate much in the same manner it did in its earliest history. Although the thoroughfare’s original buildings and businesses have been transformed from drug stores, boarding houses, dry goods stores, and saloons to businesses catering to a growing number of tourists, the character and history of Third Avenue is honored and preserved.

The definition of Sturgeon Bay’s street grid and downtown development is the result of happenstance. According to Sally Treichel, Archives Coordinator for the Door County Historical Society, “The downtown area just ‘happened.’ There wasn’t a real plan. A house was built, two lots over a business operated.”

Images of America, Sturgeon Bay, a pictorial history of the city compiled by Ann Jinkins and Maggie Weir for the Door County Historical Museum, features a majority of Third Avenue’s original buildings. Taken together, the photographs provide an excellent visual of the early development of the city.

“There were many open spaces in the street. You have to remember, in the early days, the area of Third Avenue was completely wooded. The streets were cut through the forest and were stump-studded,” Sally related. “With only one or two exceptions, buildings were no taller than two stories.”

The ebb and flow of the city’s development reflected the economics of the country, the archivist continued. “The ‘panic of 1857’ saw lumber prices plummet; there was modest growth between 1865 and 1870, followed by a depression in 1873. Raging fires routinely devastated the community, destroying everything in their path.”

“Intensive Architecture/Historical Survey and Recommendations for Downtown Revitalization & Historical Preservation for Sturgeon Bay, Wisconsin,” (February, 1983), provides an in-depth architectural description of Third Avenue. “The character of the district’s buildings is more ingenious than distinguished…taken together they illustrate the parade of styles common to 1880 – 1910 in Wisconsin.

“Detailing and craftsmanship are now only evident above eye level. Styles include vernacular or common builders, i.e. plain brick walls, unadorned windows, simple buildings that reflected space, shelter and income. There are hints of Italianate, but most often the architecture combined several styles.”

The 20th Century proved a turning point in the appearance of Third Avenue. As frequent fires destroyed wood-constructed buildings up and down entire blocks, their replacements were built of brick and locally-quarried stone.

Many buildings housed multiple businesses. Henry Hahn established a furniture store and undertaking business at 27 – 33 North Third Avenue. Built in 1904, he and his wife Emily lived upstairs. Of course, the two enterprises were related; crafting furniture was not far afield from building a casket.

“This was fairly typical of the time,” explained Sally. “Businesses moved from building to building, making an economical use of space.” The impressive Hotel Waldo, opened in 1901, was a Third Avenue landmark for many years. The hotel also housed a drug store complete with soda fountain. Hotels most often also featured an onsite restaurant.

Early 1900s photographs of Third Avenue are nostalgic images of an era long past. Women wearing ankle-length skirts and stylish hats walk broad sidewalks protected by striped awnings. Bartenders in white aprons and their customers, some in wide-brimmed cowboy hats, stand in front of the David Houle Saloon, a favorite watering hole. Advertising “Buffet and Billiards, Imported and Domestic Liquors, Cigars and Tobacco” in 1916, the site currently houses Brick Alley.

An interesting footnote to the history of Third Avenue is the web of underground tunnels. “Yes, there were tunnels,” Sally affirmed. “They served the stores with steam from the power plant. You could access the tunnels through the business’s basement.”

“The tunnels run the length of Third Avenue,” confirmed Marty Olejniczak, Community Development Director. “Branches from the main steam tunnel serviced the businesses on either side of the street. The tunnels are beginning to decay and will be removed next spring with a complete renovation of Third Avenue.”

The site of Sally’s family business began with Hay Hardware, replaced by Woolworth’s. “My family opened the business in 1953 and kept it until about 1975. Now Dr. Eric Paulsen is located in that space,” she said.

As more and more “city folk” traveled north in search of a retreat from city life, trains carrying the new tourists rumbled across the toll bridge that spanned Sturgeon Bay. The Ahnapee and Western Railway, which continued to operate for 74 years, deposited passengers at the depot on Third Avenue.

The bustle of increasing traffic in the downtown area continually spawned new businesses. Shimel the Grocer was located at Third Avenue and Kentucky Street; Dudley Lawrence operated a meat market on Third Avenue. At one point, four pharmacies and several dry goods stores lined the avenue.

The oldest continuously operating family-owned Sturgeon Bay business, operating since 1910, is Draeb Jewelers, located at 50 North Third Avenue. Established as a jeweler in 1904, George A. Draeb’s grandson George and great-grandson Bill carry on the family tradition.

The 1935 fire that claimed most of the downtown district also claimed Draeb’s. But the store was quickly rebuilt; it was at that time the distinctive black glass front was installed. “There have been no serious changes in all those years,” smiled George. Well, maybe just one.

A “street clock” stood in front of Draeb’s until the 1920s. Historically, street clocks were erected in front of jewelry stores for advertising purposes. On July 6, 2001 a replacement clock was dedicated to the memory of J. William Draeb, George’s father.

Some of the turn-of-the-century businesses continue to operate in a related modern “fashion.” Located at the corner of Third Avenue and Louisiana Street, the A.W. Lawrence and Company, built in 1880, was the county’s first modern store. Destroyed by fire in 1935, Lawrence’s son-in-law L.M. Washburn rebuilt the store, selling it to H.C. Prange Company two years later. The Prange store was eventually purchased by Younkers, a department store chain, and operates today in the same location.

Moving forward into the 21st Century, Sturgeon Bay is facing a bright future, according to Marty. “We have a nice advantage over Northern Door in that the city is supported by both the locals and visitors.”

Sturgeon Bay Visitor & Convention Bureau Executive Director Todd Trimberger agrees. “Sturgeon Bay never closes; we’re open year round. This is an exciting time for the city; there’s a real synergy going on. We want to build on that and ratchet it up a notch.”

The traffic flow to downtown will also be assisted by the new bridge, temporarily titled the Maple to Oregon Bridge. “The new bridge is higher over the water with fewer bridge openings,” he explained. “Eighty percent of the pleasure craft will clear the bridge without necessitating an opening.”

Following the completion of the new bridge, the Michigan Street Bridge, opened on July 4, 1931, will be closed for improvements estimated to continue for eight months. In recognition of its unique Scherzer-type, double-leaf, rolling-lift bascule, the bridge was named to the National Historical Register in 2006.

“Maintaining the historical integrity of the city, our connection with the water, and our pedestrian-friendly community are the priorities,” Marty emphasized. “When development is being planned, we have to make sure everything is done to code, and that our planning implements a vision for the future. Finally, the right match between the developer and the land is essential.”

In keeping with the emphasis on history, Sturgeon Bay is completing a project that will include the installation of 20 plaques on significant buildings throughout the city. The marble plaques will include the name of the building, an etching of the structure, and a brief history. A self-guided walking tour will be available to visitors.

Anchoring the north end of Third Avenue, two buildings have been rescued from the ravishes of time. The Donna Theater opened on November 25, 1950. Typical of similar structures of its time, the Donna was a Saturday night destination.

But as downtown theaters succumb to the success of the modern cinemas, the lights dimmed on the Donna in 1999. Fortunately, the old theater was granted a new life when Third Avenue Playhouse opened the doors just one year later as a stage theater. Today, the non-profit theater group hosts a variety of performances 12 months a year.

Anchoring the block’s northernmost corner is an example of the dedication of business owners to preserving the spirit of old Sturgeon Bay. The former 1970s movie theater on the corner of Jefferson Street and Third Avenue was recently reconstructed to complement the oldest buildings of the early 20th Century – On Deck Clothing Company opened in 2006.

Although the Door County Advocate was not originally located on Third Avenue, the newspaper is significant in that it is the oldest business on the peninsula. Founded by Joseph Harris in 1862, four generations of the Harris family edited the paper which today is located at 235 North Third Avenue.

An example of secondary use development and historical preservation is also Ladder House, a restaurant located in the vacated Sturgeon Bay firehouse at 38 South Third Avenue. Built in 1908, the building served as the fire station until last year. Renovations have maintained many of the original structural features of the fire station; artifacts include the firefighters’ gear, among other things.

Relocated to 36 South Third Avenue this past spring, the Sturgeon Bay Visitor & Convention Bureau moved into what was the former city hall, built circa 1903. “This building represents what is important to us:  ‘building’ on the past to bring us into the future,” said Todd. “And the location is ideal, between the two bridges.”

Today, Third Avenue boasts restaurants, a variety of retail stores, a performing arts theater, and sundry businesses. But above the storefronts advertising the latest fashions, magazines, and homemade fudge, beautiful architectural details are the legacy of a remarkable history.