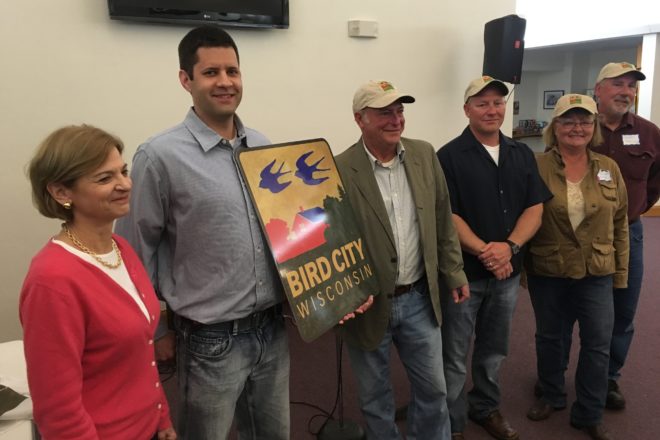 If ecologically minded citizens in Sturgeon Bay get their way, the future of the city will, literally, be for the birds.

At a recent meeting, the Sturgeon Bay Parks and Recreation Committee heard input and agreed to work toward fulfilling the criteria necessary to receive designation as one of Wisconsin’s Bird Cities. The city expects to submit its application in late fall. If accepted, it will join other Bird City communities around the state that are creating environments friendly to breeding, wintering and migrating birds.

Bird City Wisconsin was organized in 2009 under the auspices of the Milwaukee Audubon Society and the first Bird City was recognized in 2010. The program has since grown to nearly 100 communities that have collectively completed more than 1,000 actions to benefit birds. Bryan Lenz, director of Bird City Wisconsin, was on hand to award the state’s newest designation to Washington Island at the 10th Annual Washington Island Bird Festival on June 4.

In order to qualify for Bird City designation, communities must fulfill at least seven of 22 possible criteria that fall into categories such as public education, community forest management and protection of habitat. Activities that a community might engage in to benefit birds include managing green space, erecting nesting structures, using native plants and reducing threats like collisions and run-ins with feral and domestic cats. They must also adopt an official resolution to celebrate International Migratory Bird Day each year, generally observed the second Saturday in May.

Lenz explains there are as many models for reaching designation as there are communities participating.

“Some begin with a single individual. Others are the work of nature centers or Audubon chapters or are at the urging of a city planner or a local land trust. Each community meets the initial requirements in its own way. Typically, they take something they’re already doing and make it better or incorporate bird-friendly practices into items on their work plans.”

Once they’ve received designation, Lenz notes that many communities appreciate the results they see and go on to meet more or all of the 22 standards. A second tier designation, High Flyers, is available to those communities that show an even greater commitment to the Bird City program.

Kelly Catarozoli, city council representative on the Parks and Recreation Committee, asked that the Bird City discussion be added to the agenda after learning of a citizen post in the Suggestion Box on the Center Line Community Forum’s website (centerlineforum.org).

The Suggestion Box is, according to the website, a “repository of ideas provided by citizens who love Sturgeon Bay!” The tool is open to everyone and posts are shared on a regular basis with city staff and elected officials.

According to Catarozoli, “The Bird City program is a positive, happy thing for the city to be involved in. Birding is enjoyed by people of all ages and bird refuges can be created in areas as small as a backyard or as large as a nature preserve.”

Catarozoli has created a sanctuary in her own backyard and says, “It’s really fun, the more you get into it.” She points out that birding is a national pastime that’s growing.

Municipal Services Director Bob Bordeau agrees. “Providing habitat for migratory and year-round birds is good for wildlife and for the people who live in bird-friendly communities. It’s something we need to be part of.”

The City of Sturgeon Bay has participated in the Tree City program (the model Bird City was built on) since the early 1990s. It recently also became part of Playful City USA, a program that encourages active recreational opportunities for children.

Much of the Bird City Wisconsin criteria centers on creating, restoring and sustaining bird habitat.

Jodi Milske, land restoration specialist of the Door County Land Trust, attended the recent Parks and Recreation Committee meeting. She explained why birds are considered “indicator species”: “They indicate healthy ecosystems as they respond quickly to improvements in habitat.”

She noted that the Land Trust’s 445-acre Sturgeon Bay Ship Canal Nature Preserve is “quite a prize to have within the city limits. Because the preserve is located on Lake Michigan and contains a wetland complex, it qualifies as some of the most important bird habitat on the Door Peninsula.”

The Land Trust conducts annual bird surveys at the public preserve and recently received a federal grant to extend its habitat restoration efforts there. “Migrating birds crossing large bodies of water need quality wooded shoreline in which to rest and refuel. The Sturgeon Bay Ship Canal Preserve is perfect for that.”