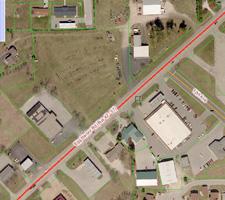 When Tom Voegele ran for mayor of Sturgeon Bay his first priority was to open up city government to the people. In January he took a step toward his goal when the city hosted its first of what Voegele hopes will be regular town hall meetings.

“My main goal was to get in and open up communication,” he said, “From there we identify priorities.”

One of those priorities is fixing Egg Harbor Road, and in planning its future Voegele’s philosophy is getting put to the test in tackling a contentious problem.

The vital and heavily trafficked corridor has been falling into disrepair for a decade as the city has debated whether to address it with short-term band-aids or long-term invasive surgery. Ten years ago the city considered a preliminary design after Jefferson Street was overhauled. The plan was for four lanes with sidewalks, curb and gutter, and other improvements, but it broke down over sidewalk assessments and wasn’t implemented.

Today, choosing to do nothing is not an option.

“The road’s obviously rough,” said Wanda Hilsabeck, owner of Wanda Jean’s restaurant at 846 Egg Harbor Rd. Hilsabeck said in addition to the road surface problems she often finds it difficult to get out of her driveway, sometimes waiting up to six minutes to enter the road.

“Everyone agrees something has to be done,” says city councilman Ben Meyer. The question is on what scale. City Engineer Tony Depies has brought several possibilities forward for consideration.

The first is an improvement aimed primarily at vehicular traffic but does not address pedestrian traffic, lighting, or aesthetics. That $575,000 plan would include resurfacing the road from 8th to 14th Avenues and adding bike lanes, not paths.

But many in the city believe it’s time to address other forms of traffic on the corridor, particularly pedestrian in an era of skyrocketing gas prices and pollution concerns. Though it may seem simple to add sidewalks to the project, Voegele said it throws a big wrench into the mix.

“You add sidewalks and you have to assess the business owners to pay for those sidewalks,” he said. “It’s too bad we can’t get beyond that and have it be part of the overall expenditure.”

Which, it turns out, isn’t out of the question. Depies explained why the city doesn’t have to rely on local assessments for the improvements.

“The mechanism that has been used is to assess property owners,” Depies said. “But with a major project like this the council may determine the benefit isn’t just to local property owners as much as to the community. You could then fund it out of the general budget.”

Hilsabeck said she doesn’t witness a great deal of walking traffic on the stretch.

“Sidewalks would definitely be nice, but I’m not sure we need them,” she said.

Meyer spoke to the overall community benefit of improving Egg Harbor Road, pointing out that most of Sturgeon Bay’s residents get their groceries on Egg Harbor Road either at Econo Foods or Pick N’ Save, but he stopped short of supporting a change in the assessment structure.

“I have a sense that changing the special assessment would open a big can of worms,” he said. “I don’t want to harm our businesses with burdensome assessments, but if we can get grants maybe business owners won’t have such a problem with the assessments.”

Still, there’s been some question of whether simply adding sidewalks is in the city’s interest.

“In general, I get the idea that a sidewalk without other improvements does not appeal to business owners,” Depies said. A project addressing overall aesthetics, including trees and other greenery, sidewalks, a bike lane, and lighting might, however.

Such a plan would increase the price tag nearly six fold, Depies said, to $2.95 million, though it’s possible up to 80 percent of that cost could be covered with grants, including some meant to offset the cost of projects that encourage bike and pedestrian traffic.

“There are multiple benefits the state foresees in encouraging pedestrian traffic,” Depies said. He said communities save money on health care in the long run if more people are out walking and getting exercise, and he pointed to research showing that businesses are more stable in areas where pedestrian traffic is encouraged.

“Sidewalks and bike paths are a great way to get people in the door of your business,” Meyer added. “Are we going to be a place where you need a car to live?”

A comprehensive renovation of the road could be completed in 2009 or 2010, but would still beg for an immediate solution to bridge the gap until then. This could be done with a short-term, chip-seal overlay to smooth the driving surface for a couple seasons at a cost of $30,000 to 40,000.

“If we’re talking about making it smoother for September to June, there may not be the desire to do it,” Depies said. “But if it’s for two summers, maybe the investment is worth it.”

Meyer would like to see the short-term fix done this spring and couple it with a comprehensive effort to plan the future of the area, but he says the city needs to rethink how it formulates its plan for this and other projects. While he said the process has certainly been open, he feels it’s not quite aggressive enough in gathering input.

“No one can argue there hasn’t been the opportunity for input, but is it the input we really need?” he asked. “When you present an idea and say, ‘What do you think?’ you’ve already steered and limited the discussion.”

Meyer would like to see two committees formed – one made up of citizens and another of business owners. Each would lay out their priorities and ideas for the corridor, then bring them to the city to evaluate and put into a plan, with discussion framed by those ideas, not the city’s.

“I would be in favor of working intensively over a two – three week period with our community,” Meyer said. “Government is more about serving the people than ruling them.”

Hilsabeck has been pleased with the city’s efforts and said she has received letters and been kept informed throughout the process.

Depies, who has been in the city office since 2001, said the planning thus far has been a huge improvement over past experiences.

“I think the process so far has been good,” he said. “We’ve gotten a lot of information on the table and we’re looking at more than a band-aid approach and identifying long-term goals.” Depies said people should consider this a sign of things to come. “I’m confident this is the way projects will proceed from now on. This will be the norm, not the exception as it often has been in the past.”