The bottleneck of cars on Highway 42/57 in the afternoons of July 21 and 22 was the result of the unexpected closure of the Michigan Street Bridge in downtown Sturgeon Bay.

Wisconsin Department of Transportation (DOT) officials instructed the city of Sturgeon Bay to close the bridge to all traffic July 21, and the city complied by 3 pm that afternoon. The bridge was re-opened to traffic at 6 am July 23.

However, the bridge will be closed to vehicular traffic from 10 pm to 6 am everyday, until the Maple-Oregon Street Bridge is open Aug. 23. The Michigan Street Bridge will then be completely closed to traffic for rehabilitation construction until sometime in 2010.

The reason for the closure was simple, according to Will Dorsey, the northeast Wisconsin regional operations director for the DOT. DOT staff members working on the construction of the Maple-Oregon Street Bridge recorded vehicles over five tons frequently traveling on the bridge, ignoring the five-ton weight limit that was imposed on the bridge by the DOT nine years ago.

It doesn’t take much more than a large pickup truck pulling a trailer or a boat to create a vehicle weighing more than five tons, Dorsey said.

With this information, Dorsey ordered a physical engineer to conduct an inspection and report on the condition of the bascule bridge constructed in 1931.

The inspection report filed by DOT bridge engineer Travis McDaniel did not shed any more positive light on the state of the bridge than information gathered during the regular inspections the DOT conducts every six months.

In a July 8 email to Dorsey, McDaniel explained that he revised the rating calculations that were imposed on the bridge in 1999. 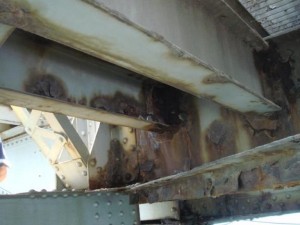 In the course of a decade, McDaniel said the steel materials on the bridge had deteriorated from an estimated 80 percent loss in isolated areas up to a 100 percent loss.

What this means, Dorsey explained, is that a one-inch thick steel beam that may have been down to three-quarters of an inch or half an inch thick 10 years ago, may now have a hole through it.

“During the inspection, we verified that bridge has continued to deteriorate,” Dorsey said July 23. “In the past we could have allowed 5.5- to 6-ton vehicles on the bridge, but not any more.”

Although the deterioration of the Michigan Street Bridge is serious, a failure similar to the bridge collapse in Minnesota is not likely to happen, Dorsey said.

“There could be localized failure, which means we may have supporting beams crack, or some of the bridge decking fall,” Dorsey said. “A vehicle could partially fall into the deck area, which is a significant risk to people and could damage property. But it wouldn’t be the whole bridge falling or collapsing.”

Serious enforcement of the weight restrictions is now absolutely necessary, Dorsey said, otherwise the bridge would have to be closed to traffic completely.

Until the scheduled Aug. 23 opening of the Maple-Oregon Street Bridge, Sturgeon Bay police officers and Door County Sheriff deputies will man each side of the bridge at the intersections of First Avenue and Michigan Street and by the Door County Maritime Museum, which will allow oversized vehicles space to turn around and go over the Bayview Bridge.

Enforcement of the five-ton weight limit has been difficult, according to Sturgeon Bay Police Chief Dan Trelka.

“Generally enforcement is complaint driven,” Trelka said. “We have had times where we monitor it occasionally, but we couldn’t afford to do it continuously.

“We asked the state to close the bridge from 10 pm to 6 am because we don’t have the manpower to do anything else.”

That plan was approved by the DOT late Tuesday afternoon and was put into action Wednesday night.

“We hope people appreciate the fact that we didn’t want to close the bridge,” Dorsey said. “If we felt there was a way to get around it, we would have. But we couldn’t afford the risk to public safety.”