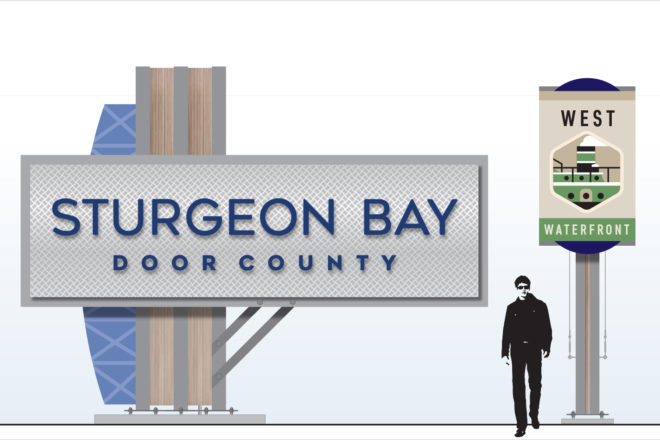 Door County claims an astounding 298 miles of waterfront, but few people realize that nearly a third of that is in and around the city of Sturgeon Bay. The Sturgeon Bay Visitor Center is out to change that with a new signage initiative designed to draw people into the city and down to its expanding public waterfront.

The city has approved a three-year plan to install new signage throughout the city, with much of it aimed at guiding people to and along the public waterfront. Pam Seiler, director of the Sturgeon Bay Visitor Center, said the signs will battle a problem Sturgeon Bay residents and business owners know all too well.

Gateway signs aimed at vehicular traffic will be placed at the north and south entrances to the city, and signs directing people toward arts, museums, food and shopping will be placed at Neenah Avenue, Egg Harbor Road, Michigan Street and Walgreens.

“We need them to know that they’ve arrived in Door County, that we have everything that people come to Door County for right here in Sturgeon Bay.”

Downtown signs will guide pedestrians to shopping, attractions, restaurants and most importantly, to the often-overlooked public waterfront.

Since 1992, the city has nearly doubled the amount of public waterfront, from 3,696 feet of publicly accessible waterfront downtown to 6,066 feet. If you include land owned by the city and leased to private businesses, 75 percent of waterfront in the downtown core is publicly owned.

But most visitors – and even many residents – aren’t aware that much of that shoreline is public. For example, the waterfront in front of Stone Harbor Resort is accessible to the public, but only small signs tell pedestrians that they’re welcome to enjoy it. To the east, Graham Park and the stretch in front of Center Pointe Marina is public, but it appears as though it’s for the use of neighboring condominiums.

On the west side, the public waterfront stretches from Otumba Park to Sawyer Park, but at the entrance to the walkway at Otumba Park, the sign telling people what isn’t allowed is larger than the sign designating it as a public walkway.

“Honestly, we haven’t always done a really great job of making the public aware of all of the waterfront access,” said Community Development Manager Marty Olejniczak.

The public is free to stroll the waterfront in front of Bridgeport Resort, the old Ahnapee Railroad bridge spur, and around Sonny’s and the Door County Maritime Museum. Next year the city will begin extending the waterfront promenade past the Oregon Street Bridge to Sawyer Park.

An ad hoc committee of business owners, officials and residents worked with Avia Creative to design the signs and placements that aim to change the lack of information or confusing information. Mike Haug, Avia’s senior designer, said the first problem facing the city was Highway 42/57.

“Ninety-nine percent of people drive right around Sturgeon Bay without realizing there are things to do there,” he said. “Their perspective is very limited to a couple industrial parks.”

New highway signs will point people to the downtown area and serve to connect the east and west waterfronts. In designing the signs, Haug and creative director Todd Mayfield wanted to pay homage to the city’s industrial heart while making it clear that it’s also a place to play.

“People think of Sturgeon Bay as just the working town,” he said. “Having some color and interest create the impression that there is something fun to do in the city.” Yet, he said, a beach look wouldn’t be true to the Sturgeon Bay experience.

“It’s a working city. You want to draw on the shipyards and the iconic steel bridge,” he said. “So the signs are industrial looking, with the elegance of a sail.”

The signage comes with a hefty price tag – an estimated $600,000 over three years – but if it helps to direct even a small portion of visitors into the city who would normally speed on by, the signage could pay for itself quickly.

“After you install a wayfinding program, there’s an uptick in visitor traffic to areas that were previously underserviced,” he said. “Signage makes them aware of other areas and attractions.”

Seiler said she aims to remove more signs than they put up, consolidating what Mayfield called a mishmash of signs into one efficient, cohesive brand to give visitors and residents a sense of place.

“It’s especially important in communicating safety to visitors,” Mayfield said. “One of the challenges is that along the bay walk, people are afraid to explore because they’re not sure if it’s private property. It wasn’t clear where a path would end and where it would continue.”

Blue pageantry “blade” signage along the bay walk will mark areas as public and invite pedestrians down the waterfront.

As the city embarks on improving wayfinding, anonymous donors are pitching in $300,000 for enhancements to Graham Park. The little-used park at the eastern foot of the Oregon Street Bridge will get new games, outdoor ping-pong tables, seating and a water feature. Lars Braschnewitz of Sterling Landscape Services developed a landscape plan and has agreed to adopt the park pro bono for five years.

“Without any activation, the park is just a green space that isn’t used,” Seiler said. “We want visitors and residents to get out and enjoy all that Sturgeon Bay has to offer. We want people to be proud of Sturgeon Bay.”