An initiative to fund a premier skate park in Sturgeon Bay is progressing quickly.

The Door County Skate project, a 10-year-old non-profit that was raising funds for a community ice rink, ceased fundraising in 2011 and donated $51,000 from its account to the skate park project. Door County Skate is one of many organizations supporting the effort.

Matt Young is leading the force, not because he has kids who skate, but because he loves to skate. He knows what makes a good park from the various parks he has visited across the country, and he sees a need for it in the community.

“I love to skateboard, and I think it’s an activity lots of kids and people would get into if they had a place to do it that was safe and well-built and fun,” Young said.

Young isn’t the only one who thinks it’s time for a professional-quality skate park in Sturgeon Bay.

In June, the Sturgeon Bay City Council set aside land near the West Side Ball Field for the park, which started a snowball effect of community involvement.

The city’s action caught Door County YMCA Executive Director Dan Powell’s eye, and he helped the Sturgeon Bay Sk8 Park Initiative land a volunteer spot at the Door County Triathlon and get the help of the Door County Community Foundation.

The work at the triathlon earned the group a $1,000 donation, and the community foundation is now holding the funds for the group, making all donations to the cause tax deductible.

As a community member, Powell said he wanted to use his relationships from the YMCA because “the city stepped up and wanted to do things for youth and family around the community – that’s part of [the YMCA’s] mission,” he said.

Glas Coffee Shop in Sturgeon Bay is also contributing to the park through their Skater Blend. A portion of the price of every Skater Blend cup sold goes to the skate park.

The growing support from the community keeps Young moving forward, and he’s excited by the enthusiasm he has seen from others. 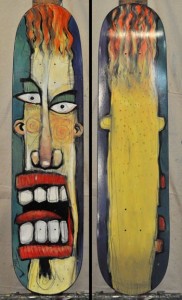 “It’s a huge vote of confidence that this project needs to happen and is going to be good for this community,” Young said. “You just keep following the yes’s – when people say yes and they want to help that broadens that base of support.”

With about $57,000 raised to date, the group solicited bids from companies for a park design and chose Seattle, Wash. based Grind Lines Skate Parks. The park will be made of poured concrete, and the first phase will be 2,500 square feet.

Young estimated in July that the costs for the first phase could be $90,000, but until a design is drawn up, no set cost has been determined. Young said the group will apply for grants to raise more funds.

Within the next 30 days the group will host a design kick-off meeting to determine what elements should be included in the park’s design. Following the lead of a Sister Bay Sk8 Park fundraiser, the group is also auctioning off skateboard decks painted by local artists. The 20 pieces will be on display at Glas in January, with the auction date still to be determined.