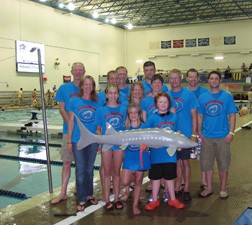 Door County’s underwater hockey team, the Sturgeons, competed in the 2013 National Championships July 12 – 14 and placed fourth overall in the B Division. The competition was held at the Walter Schroeder Aquatic Center in Brown Deer, Wis.

The team competed against 13 other teams from across the nation in the three-day tournament, playing four games each day. The team had a slow start on Friday, winning just one of their games as they faced some challenging opponents while adapting to the fast-paced tournament play and to a new style of defense designed by coaches Kendall and Sue Banks to maximize the effectiveness of team members.

The adjustments clicked with the team on Saturday, and they tied in their first game against Illinois. They went on to win the three remaining games of the day, placing them in the fifth seed for playoffs on Sunday.

On Sunday the team competed very well, winning their first two games against George Mason University from Washington, D.C., and against the Barnacles, a composite A-division team. The Sturgeons played excellent matches in the high-level semi-final games against the Sea Cucumbers from Washington, D.C., and against Club Puck from San Francisco. They lost both games by only a point and placed fourth by the end of the day.

This was the Sturgeons first appearance at the national level of competition, as they have been a team for only a year. Players include: David Foulds, Tim Feist, Albert Weber, Amy Ensign, Paul Filar, Trisha Filar, Sue Banks, Kendall Banks, Brendon Ewers, Robert Vernon and Molly Banks. Abby Banks and Owen Ensign-Foulds are team managers.

The underwater hockey team meets on Friday nights at 5:15 pm at the Sturgeon Bay YMCA and welcomes new members of all ages. For more information visit sbunderwaterhockey.com.