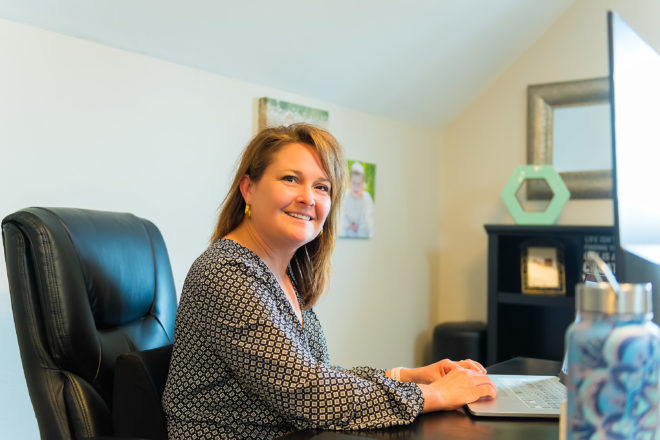 Carrie Baldwin Smith started Door County Event Planners in 1997 at the age of 23. She and her company have since helped plan 800 weddings. Photos by Len Villano.

For wedding planner Carrie Baldwin Smith, this past March marked a full 20 years of answering the needs and realizing the dreams of Door County brides and grooms.

In that time Carrie has gone from flying solo and managing six weddings in a year, to employing two other planners and pulling off 40 to 50. Her grand total, which includes everything from two-person elopements to 350-guest events, is more than 800 weddings.

Although she never expected to run her own company, Carrie recognized early on that she might have a calling in the service industry:  “I can’t sit still and I knew I needed to be in a field that kept me busy.” So after spending most of her childhood in Stillwater, Minn., she attended the University of Wisconsin — Stout, graduating with a major in hospitality and tourism and an emphasis in event planning.

By then, Carrie had already gained formative experience helping run banquets at a Hotel Sofitel, cocktail waitressing in downtown Minneapolis, and even caring for 37 horses and leading trail rides at a farm in River Falls, Wis.

Upon graduation, Carrie decided to pass the summer making some quick cash in a popular vacation spot that “felt like Utopia” — Door County. She never intended to stay and was soon offered a prime position at a restaurant in Kansas City. But she turned it down.

Her mom, still living in Stillwater, had recently been diagnosed with breast cancer, and Carrie did not want to move so far away from her.

Instead Carrie remained in Door County, waitressing, bartending and working at hotel front desks. Shortly after landing a position in group sales and marketing, she discovered a growing need on the peninsula for a professional event planner.

Carrie’s mom, Sue Baldwin, was declared cancer free in the fall of 1997, and only months later, Carrie founded her company, Door County Event Planners. She was just 23.

Carrie takes great care in all the weddings and other events she has planned for clients during her career, but in 2007, 10 years after her mom’s remission, she organized a particularly special event of her own called the Pink Classic — a golf outing to raise money for women battling breast cancer.

Horseshoe Bay Golf Club in Egg Harbor was happy to host the fundraiser because Carrie had been their subcontracted wedding planner for years. And although she only meant it to be a one-time event, to honor her mom and help a few other women still fighting, the attendees had different ideas: “You’re doing it again next year, right?” they said.

Now there are Pink Classics every first Sunday of June and an established Sue Baldwin Fund, with a team of board members to evaluate applicants and administer aid all year round.

Carrie is no stranger to service projects. In the past she has volunteered her time for the Big Brothers Big Sisters organization, the Baileys Harbor Thanksgiving Dinner, and Door County Humane Society, to name a few. But the Sue Baldwin Fund undoubtedly holds pride of place, and with its annual Pink Classic fundraiser, Carrie has found the chance to combine two of her greatest talents and passions — planning events and playing golf.

In the past decade, the Pink Classics have raised more than $200,000. With these donations, the Sue Baldwin fund has paid medical bills, supplied gas cards, and even remodeled one woman’s shower. Last year alone, the event contributed more than $28,000 and the fund helped six women from the community.

Carrie’s remarkable success, not only as benefactor but also as entrepreneur, comes through serving the people around her — and what is most remarkable is how she keeps her focus on those people.

In fact, the ability to participate personally in each wedding her company plans is so important to Carrie that she has intentionally chosen not to expand her business.

“She really is invested,” said Andrew Morel, COO of Horseshoe Bay Golf Club, citing Carrie’s loyalty, honesty and skill as a planner. “It’s not just talk — she backs it up, day in and day out.”

Carrie “backs it up” by planning ahead for every detail, preventing most problems and handling whatever issues do arise so the family doesn’t have to. No matter what happens on that wedding day, she can, in Morel’s words, “always find a way to get that timeline back on.”

For example, only last fall, Carrie pulled off what she calls “the hardest but most beautiful wedding” for a fellow planner, whose father was in rapidly declining health. When the day came, he arrived in a wheelchair and unexpectedly ill. Carrie had to think fast, whip together a new schedule, and help the whole team execute it, so the ceremony could be postponed until he was ready to be there for his daughter. It all ran so smoothly that the bride herself did not know exactly what had happened behind the scenes until after the wedding was over.

Carrie also attributes her success to growing her business around the most vital relationships in her own life — those with her husband and two daughters. This involves both a healthy separation, by keeping Sundays and most evenings exclusively for family, as well as a creative integration:  she often brings along her engineering spouse to build arches or arrange lighting, and her young girls to fill votives or spread linens before a wedding. 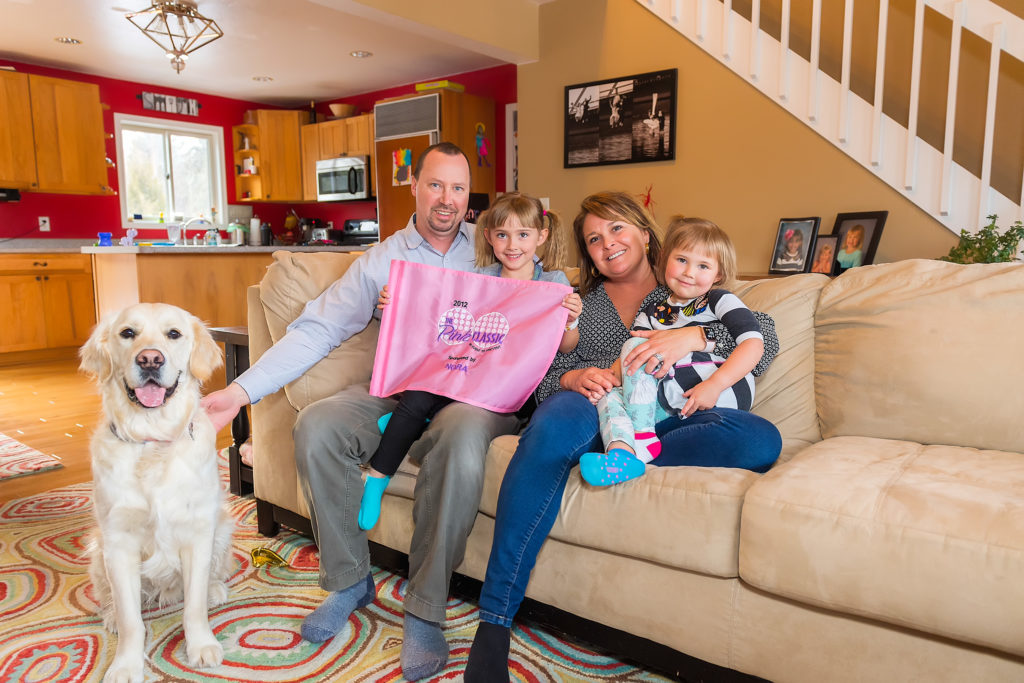 Carrie enlists her family, husband Nate and daughters Nora, left, and Camilla, when preparing for some events. Also pictured is the family’s dog, Harbor.

Involving children, both her own and others, is a significant motivation in Carrie’s charitable ventures too:  she is determined for this younger generation to “know the sense of our community and what it’s like to give back.”

That’s why at the Pink Classic, youngsters scamper about in pink tutus, selling raffle tickets and livening up the dance floor. It’s also why just this past Christmas, Carrie helped organize a group of Northern Door families to buy and then wrap gifts for 32 underprivileged children, a practice she hopes to make an annual affair.

Carrie further fosters these community relationships and focuses on the people around her by keeping things local. She strives to partner with Door County vendors as often as possible, and the Sue Baldwin Fund recipients are limited to Door County women. That means those who attend the Pink Classic and donate to the fund may be helping people they actually know.

Finally, of course, it was a very personal relationship that inspired Carrie to start the fund in the first place, and although a few years later she had to watch her mother undergo another bout of cancer, thankfully Sue beat this one too.

Carrie actually credits her own heart for service to her mom, recalling how she “was always a giver.” Like mother, like daughter. Let us hope, for Door County’s sake, that the legacy continues.