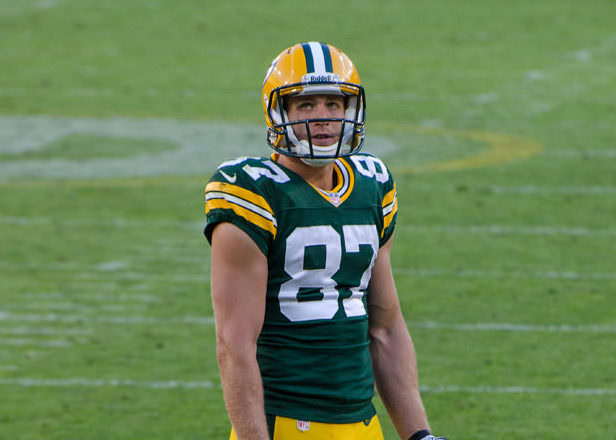 Green Bay Packers receiver Jordy Nelson came back from a 2015 injury to give one of the strongest performances in his career. Nelson finished the 2016 regular season with 97 receptions for 1,257 yards and 14 touchdowns. Photo by Mike Morbeck/public domain.

The Green Bay Packers’ eight-game win streak came to an end in Atlanta as the Falcons knocked the Packers out of the postseason in the NFC Championship Game on Sunday, Jan. 22. Atlanta’s 44-21 victory against Green Bay will send the Falcons to Super Bowl LI to play the AFC Champions, New England Patriots.

Atlanta will play in its second Super Bowl in franchise history. The Falcons lost to the Denver Broncos in Super Bowl XXXIII, 34-19, at the conclusion of the 1998-99 NFL season. The Patriots will play in a league record ninth Super Bowl, having won four (Super Bowls XXXVI, XXXVIII, XXXIX, and XLIX). Super Bowl LI will be played on Sunday, Feb. 5, in Houston, Texas.

Coming just a game away from the NFL championship game, the Packers’ 2016 campaign was a success, despite many challenges.

Twenty of the 32 NFL teams ended their season back on Jan. 1 after Week 17. For the remaining 12 that entered the postseason, each week spelled the end of the season for those who met defeat. The victors advanced one game closer to a Super Bowl title. But in the end, just one team goes into the offseason reaching their ultimate goal of winning the championship. For the other 31, those teams will reflect and make necessary changes for the upcoming season.

As time heals the initial heartache of another season coming to its end, the opportunity to look at the greater picture comes into play. Thirty-two teams began the 2016 season, while the Packers, against significant odds in November, managed to become one of the final four remaining.

Finishing the season at 10-6, earning an NFC North Division Championship for the fifth time in six years, the Packers earned their eighth consecutive winning season, dating back to 2009.

Much was made out of Green Bay’s four-game, midseason losing streak. However, looking at the big picture, the Packers were 10-2 outside of their slump, including beginning the season at 4-2 and concluding it with a six-game regular season win streak.

Aaron Rodgers, who led the league with 40 touchdown passes to just seven interceptions, treated Packers’ fans to remarkable performances. In his 12th NFL season, he rushed for the most yards in his career, and assured fans that he is still playing in his prime. His candid locker room comments, including his belief in the team’s ability to “run the table” in their final six regular season games, gave fans hope and promise each week.

Wide receiver Jordy Nelson came back from a torn ACL that kept him out of the 2015 season to give one of the strongest receiving performances in the NFL. Playing in all 16 games, Nelson led the league with 14 touchdown receptions and a team-best 97 receptions. His 14 touchdown receptions this season are tied for fourth-best in franchise history while his 97 receptions were good for fifth in team history. Both his touchdowns and overall receptions were his second-best in his career. Nelson even suited up for the NFC Championship game despite two broken ribs, a testament to his toughness.

Head coach Mike McCarthy, in his 11th season, did an extraordinary job in keeping his team focused and competitive, despite an injury-plagued season. His 114 regular season wins has him in second in team history, only behind founder Curly Lambeau (212).

While the 2017 season is eight months away, Packers fans will have the opportunity to enjoy the NFL offseason that brings excitement for the coming season. In addition to the returning veterans, free agent signings, trades and the NFL Draft will bring new optimism as the Packers look to reload for a Super Bowl LII run.

The 2017 preseason will kick off on Thursday, Aug. 10, while the regular season is scheduled to begin Sept. 7.

Justin Skiba is a local educator and former high school football coach. He lives in Sturgeon Bay with his wife, Stephanie, and daughter, Delaney.