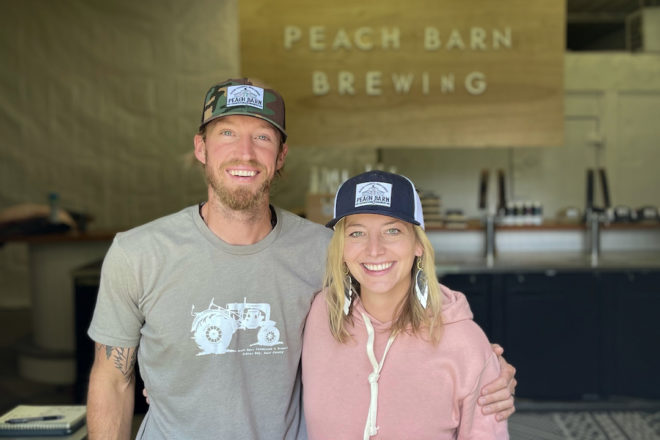 This week I got to sit down with Sarah and Jason White of Peach Barn Farmhouse and Brewery, a new addition to Sister Bay. The couple and their three children have recently moved to Door County from Fort Collins, Colorado, where Jason grew up.

Growing up in Fort Collins around breweries such as Odell Brewing Company and plenty of others has inspired many of the beers they’ve been creating, and the Whites have also been passionate home brewers for years. So, although it seems as though this would be a logical and smooth transition, it wasn’t until they had encountered a few roadblocks that the brewery was born.

Sarah and Jason originally bought the former auto-body shop in Sister Bay with the idea of making it a year-round market. Jason had previously run a Colorado peach-distribution company, so the idea of providing fresh products to consumers seemed to be a good choice. Issues with that plan led to them to switch gears, however, and after evaluating a few other ideas, they decided to turn their love of home brewing and beer culture into a business.

Those of you who were excited about the thought of a farm market, don’t worry! Plans to introduce some farmers-market products to the business are in the works, and in fact, they’re planning to bring some of those amazing Colorado peaches to Door County in August.

The brewery currently offers a variety of outdoor seating options, with hammock chairs, picnic tables and chairs set up throughout the spacious yard and around a fire pit. For those who are wary of the elements, there’s a large pergola and event tent with tables, and kids have a little play space to call their own.

“Door County is peaceful, relaxing and family focused, and that is all what we’re trying to make this place become,” Sarah said.

The Whites plan to tackle many projects this fall and winter, including completely redoing the interior to create a tap room with indoor seating and installing brewing equipment, with hopes of brewing in the space by the spring or summer of 2022. For now, Madison-based Karben4 Brewing is doing Peach Barn’s brewing. Jason and one of the Karben4 owners became friends after playing baseball together in college, and Jason said he knows he can trust him to make his beer.

The Whites’ connection with Door County goes back to when Sarah’s grandparents purchased land in the Garrett Bay area following the death of one of their children. They knew they needed to do something new to rekindle joy, and a Door County summer house seemed like the perfect approach. Now Sarah and Jason’s children are growing up in the community where their great-grandparents built a summer home so long ago. One of the beers on the Whites’ list – Where Harry Met Sally Farmhouse Ale – honors these grandparents who, in a way, started it all.

Although Sarah had been coming to Door County her entire life, it took a bit of convincing to get Jason to give what he called “northern Wisconsin” a chance. Following his first trip more than 12 years ago, however, he fell in love with the peninsula.

“Getting to know the community and beauty of Door County has been awesome,” Jason said.

Other family members have also decided to make the move to Door County from all around the country, including one of Sarah’s aunts, who was visiting Peach Barn during our interview and said that Door County is a “legacy of love” for the whole family. After getting to know Sarah and Jason and seeing what they’ve created – and still plan to do – at Peach Barn Farmhouse and Brewery, I can easily see this legacy of love. I’m glad they’ve joined the community.