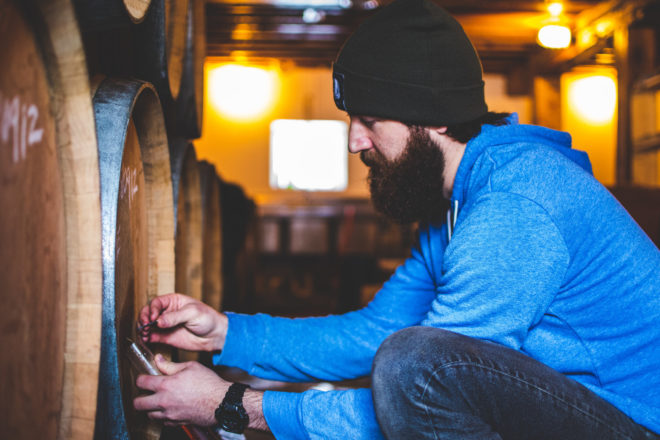 This week I sat down with Matt Sampson, the head of fermentation, branding and marketing at Hacienda Beer Co., to talk about the process behind its three recently released sour beers.

For those of you who are unfamiliar with this style, yes, you read that right: sour beer. The type of sour beer we’ll be talking about here is made in the traditional style and is also referred to as mixed-fermentation. The other type of sour beer made by craft brewers is a newer method called kettle sour. These are made in much the same way as other beer styles and have a far less complex acidity that can be achieved in a day as opposed to years.

Most sour beers are started using a basic beer base to provide a light backbone with a good body, and they avoid any flavors that might react or combine poorly with the funky sour flavors created during the fermentation process. For Hacienda Beer Co. mixed-fermentation beers, this typically involves a simple pils malt and wheat base and a mild hop. Once the base beer has been created, the real magic begins.

The fermentation stage is where sour beers gain their distinctive flavor profiles. Instead of using only ale and lager yeast strains that ferment in a predictable way, mixed-fermentation beer styles use various bacteria – such as lactobacillus – in combination with wild yeast strains – brettanomyces. These create a variety of sour, tart, fruity, acidic and other flavors.

The location of the fermentation process for these beers is also unusual. Instead of fermenting in a metal tank, mixed-fermentation beers are transferred to wood vessels such as barrels or foeders (pronounced FOOD-ers). The fermenting beer remains in these vessels for a significantly longer time than most other styles. Although most other types of beer ferment in about a week, wild yeast and bacteria move much more slowly and can take anywhere from months to years to fully ferment. Once fermentation is complete, the beer then needs to sit and develop for anywhere from a few months to a few years to reach peak flavor.

During this time, the brewers or fermentation specialists frequently taste the developing beer to assess the remaining sugars, developing flavors and unique characteristics in each barrel, and they measure the pH to ensure a good level of acidity. This is also an excellent time to add any additional ingredients such as fruit to give an extra layer of complexity.

At Hacienda Beer Co., Sampson knows to let the developing beer do its own thing and to plan accordingly. In fact, when brewing the beer, the typical plan is to fill barrels – the flavor profiles and themes for each beer are decided during the following months or years as it develops.

Once the beer is deemed ready, it’s time for the true test of a brewer’s skill: blending. Rarely is a single barrel selected and bottled as is. Different barrels develop in different ways, so they must be mixed to eliminate excess acidity and other funky characteristics and to provide an extra layer of complexity to each bottle.

Now that we’ve briefly scratched the surface of these complex and historical styles, you’re ready to try the new releases from Hacienda Beer Co.: Insatiable Dreams, Insatiable Dreams Strawberry and Le Printemps (Spring). Both of the Insatiable Dreams varieties are in collaboration with Kuma’s Corner, a popular brew pub in Chicago. They’re blends of a six-to-eight-month aged foeder and two barrels – one aging since March 2018 and a younger one. Insatiable Dreams is the base blend and has been aging in bottles since August. Its strawberry version was refermented for a week on local strawberries in July before bottling.

Le Printemps is the barrel-aged version of a previous release brewed with local honey and a mild dry hopping. It’s a blend of three different oak barrels that each had five gallons of local honey added during fermentation. Because honey is an easily fermentable sugar, the yeast and bacteria convert almost all of the sugars out and leave a drier beer with a distinct honey flavor.